The 700 MHz Frequency and the Philippine Telecom Duopoly

A lot of people are asking about the 700 Megahertz (megahertz) spectrum and why there’s a lot of fuss being made about it in tri-media. This is in relation to the groundbreaking P69.1-billion deal made between corporate giants San Miguel Corporation (SMC), PLDT and Globe in May that saw the sale of SMC’s telecom assets to the two dominant players of the Philippine telecommunications industry. Among the terms of this deal is the transfer of licenses held by SMC’s Vega Telecom Inc. to what is called the 700-Mhz band to the two for co-use.

In November last year, both PLDT and Globe raised a big ruckus against the National Telecommunications Commission (NTC) demanding that the government regulator re-distribute the 700-Mhz band, then still owned by SMC. It seems that in the end the two finally got what they were zealously fighting over, using bullish tactics to do so, as pointed out by some industry insiders.

So what’s with the 700 MHz band and why is it such a highly prized piece of telecom property?

Let’s first take a look at how mobile (cellphone) communication works. Whenever we place a call or send text or email, our cellphone converts our voice or message into an electronic signal, which is then transmitted “through the air”, so to speak. This electronic signal is then received by the nearest cell site, which in turn transmits it to what is called a switching center that determines where the call or message should go. Whenever we receive a call or message, it is sent to us from the nearest cell site as well. 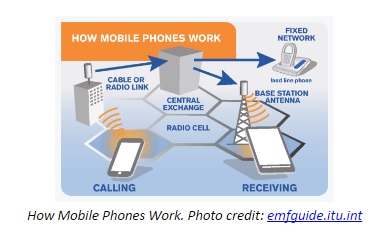 Cellphones use a range of frequencies within the radio spectrum, from 30 kilohertz (KHz) to 3 gigahertz (GHz). This spectrum is also used by other technologies like radios, television, wireless LAN, Bluetooth, GPS, and communication satellites. To prevent interference from the different users of the radio spectrum, an agency of the United Nations called the International Telecommunication Union (ITU) determines and allocates frequency ranges to different technologies and uses.

In 2007, the ITU re-allocated the frequency range from 694 to 790 Mhz, also called the 700 MHz band, from its use in television broadcasting to international mobile telecommunications. At the time it was only re-allocated for two out of three ITU regions, specifically the Americas and Asia-Pacific. It was only in November last year that the ITU declared that the 700 MHz band be used for mobile communications, at a global level[1].

Relevance of the 700 MHz Frequency in Mobile Communications

The 700 MHz band is the lowest frequency allocated for mobile communications. What is the significance of this?

Firstly, a lower frequency translates to a longer distance that one wave can reach (called the wavelength). This means that using the 700 MHz band for mobile communications will allow a wider coverage area compared to the 1900-Mhz or 2100-Mhz setup currently being used. Providers aiming for increased coverage will need relatively lower investments in setting up new cell sites.

Considering that Smart and Globe currently has some 19,000 cell sites between them[2], rolling out new facilities at the 700 MHz frequency is made even cheaper by just adding receivers and transmitters for the 700 MHz band in existing cell sites.

Secondly, since the 700 Mhz band was only quite recently opened up for mobile communications, there are only a limited number of devices that are compatible with the frequency. Acquiring the 700 Mhz frequency thus opens up a new opportunity to sell devices anew, a fact that even Smart has admitted when they said that they are pushing for partnerships with device manufacturers for the production of lower-priced 700-Mhz ready LTE devices[3]. Selling devices, be it low- or higher-priced, translates to additional revenues for the duopoly.

Finally, acquiring the majority of the 700 MHz band means that there is little wriggle room for any third entrant in the mobile communications industry. Currently the two giants – PLDT and Globe – already dominate the radio spectrum allocation for mobile communications (discussed in a later section). Any new player will have a very difficult time sustaining operations without a decent allocation of radio frequencies to use.

The 700 MHz Frequency in the Philippines

In the Philippines, the National Telecommunications Commission (NTC) manages the radio frequencies based on the global standards set by the ITU. It does so in two ways: First is by allocating non-overlapping blocks of the radio spectrum for particular uses (ie, broadcasting, military, mobile) through the National Radio Frequency Allocation Table (NRFAT). Secondly, the NTC assigns specific frequencies within the allocated blocks to different licensees. Licensees are granted exclusive right for a renewable period of three years to use the assigned frequencies to provide designated services, in exchange for paying the spectrum user fee (SUF).

In the 1990s, bulk of the 700 Mhz band was owned by a company called Liberty Broadcasting Network Inc. (LBNI), a local company which provided voice and data communication services as well as trunk radio services. At the time LBNI was chaired by Raymond Moreno, a known Marcos crony, through the holding company Liberty Telecom Holdings Inc. (LTHI). In 2005 LBNI became insolvent, and in 2008 shares of LTHI was bought by several companies, namely Qatar Telecom QSC (QTel) and White Dawn Solution Holdings.

In 2009, LTHI became a subsidiary of San Miguel Corporation which acquired 32.7% of the company through Vega Telecom. In 2010, SMC in partnership with QTel launched their 4G Wi-Tribe wireless broadband service using the frequencies owned by Liberty Telecoms in the 2500 MHz band. By 2015 SMC acquired full ownership of Liberty, although its 700 MHz band remained unused. 80 MHz out of the 100 MHz under the 700 MHz band is licensed to Liberty Telecoms.

10 Mhz of the band was owned by High Frequency Telecommunications (formerly Hi-Frequency), which was granted a telecom franchise in 1998 . This was similarly acquired by SMC in 2015 by buying out its holding company, MultiTech Holdings, Inc.

Under the terms of the sale of SMC telecom assets in May 2016, and with the approval of the NTC, Smart and Globe got to use 35 MHz each of SMC’s 90-MHz stake in the 700 MHz spectrum. 20 MHz was left unassigned for use by a new player. The remaining 10 MHz of the 700 MHz band is owned by New Century Telecom, Inc, a Pasig-based telecom consultancy company which was granted a franchise to provide commercial telecom services in 1997.

Duopoly in the Country’s Radio Spectrum

With the realignment of radio frequencies from SMC to PLDT and Globe, a whopping 91% of all frequencies assigned to telecom service companies are now in the hands of the duopoly. 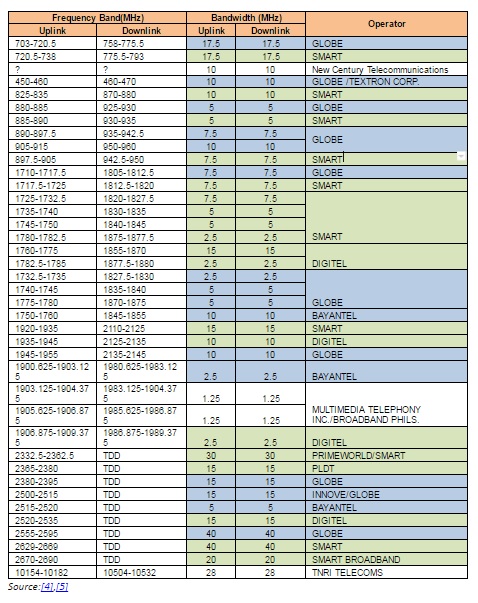 Having almost all of the available bandwidth for mobile communications, it is a wonder really how these are utilized to the fullest such that reliable and fast mobile internet access is made available to most Filipinos at affordable rates.