Is change forthcoming under the Duterte administration?

For the first time in recent years, the sitting president’s first State of the Nation Address (SONA) was met not by protests but by support for the change he promised during his campaign and right after winning the elections. It was also a first in recent years that the mass action during the annual SONA was able to go near the Batasan complex. Progressives were there to present their agenda for change. This was the same 15-point agenda that they earlier handed to President Duterte.

Did President Duterte’s first SONA outline his agenda for change?

Below is an enumeration of the main points President Duterte mentioned in his SONA:

1. Justice – President Duterte declared at the start of his state of the nation address that he would not engage in finger pointing while he would draw lessons from the past.

This was a welcome relief from the endless blaming game that the previous Aquino administration engaged in up to the last year of his term. While former president Gloria Macapagal-Arroyo did commit a lot of crimes against the Filipino people, it was much of a stretch that even the problems resulting from the policies and actions of the Aquino administration was blamed on Arroyo.

2. War on drugs and human rights – While President Duterte declared that his administration would uphold the rule of law and human rights, he appeared to be still justifying the extrajudicial killings of suspected drug pushers and addicts. He even urged the police to double, triple their efforts.

The drug menace is a serious problem in the country, as well as internationally. Stories of brutal crimes apparently committed by drug-crazed criminals populate the media. There were also cases of sudden deaths resulting from drugs, which reportedly have become more potent. Drugs have indeed been destroying lives and families.

But arbitrarily killing suspects is not the way to do it. The Duterte administration could not arrogate upon itself the power of life and death over people. Not only would innocent people be victimized, drug addicts who could still be rehabilitated would not be given a second chance at life. A thorough investigation into the drug trade and the prosecution of all those involved from drug lords, financers up to the level of pushers would be a more prudent and yet effective approach. No one should be sacrosanct, including government, military, and police officials involved in drug trafficking. 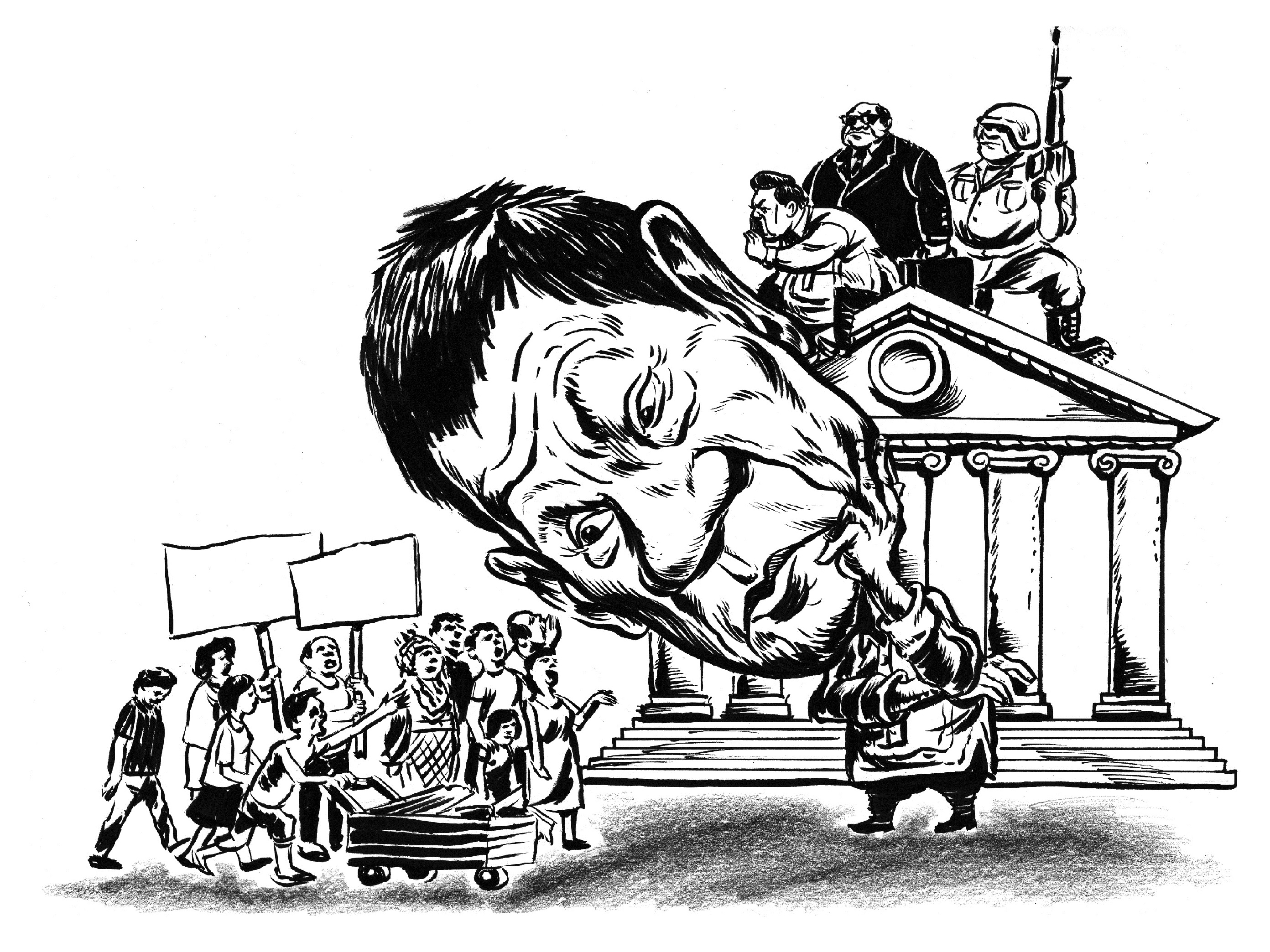 It is worth noting that President Duterte recognized the need for more drug rehabilitation facilities and has directed the Armed Forces of the Philippines to convert some of its facilities for rehabilitating drug addicts.

3. West Philippine Sea dispute – “We strongly affirm and respect the outcome of the case before the Permanent Court of Arbitration as an important contribution to the ongoing efforts to pursue the peaceful resolution and management of our disputes.”

4. Just and lasting Peace – President Duterte recognized that: “Enduring peace can only be attained only if we meet these fundamental needs of every man, woman and child.” In other words, peace could only be attained through addressing the roots of the armed conflict.

With regards the peace negotiations with the Moro Islamic Liberation Front and the Moro National Liberation Front, President Duterte declared his support for the Bangsamoro Basic Law (BBL) and a federal system of government.

President Duterte declared a unilateral ceasefire with the CPP-NPA-NDFP.

These measures are positive steps toward a just and lasting peace. But peace based on justice could only be attained through addressing the roots of the armed conflict. So the meat of the matter is how the BBL could approximate the aspirations of the Bangsamoro people for self-determination and how the Government of the Republic of the Philippines (GRP) and the National Democratic Front of the Philippines (NDFP) would arrive at an agreement on the two main substantive agenda in the peace negotiations, namely the Comprehensive Agreement on Social and Economic Reforms and the Comprehensive Agreement on Political and Constitutional Reforms.

If these are worked out, and in the process, “the fundamental needs of every man, woman and child are being gradually met,” then President Duterte would be able to fulfill his goal: “We will strive to have a permanent and lasting peace before my term ends. That is my goal, that is my dream.”

“We shall continue to attract investments that will generate thousands of jobs each year — jobs that are suitable for the poor and less skilled members of the workforce.”

“Reforms to ensure competitiveness and promote ease of doing business will be mandatory. Reacting to these needs, the restrictions on the economy will be needed to make more investments to come and to develop labor-intensive industries such as manufacturing, agriculture and tourism shall be pursued.”

“We must also invest in human capital and ensure equal access to economic opportunities.”

President Duterte’s thrust toward industrialization and the development of manufacturing and agriculture would hopefully create more jobs, make the country less vulnerable to the world economic crisis and provide for the needs of the country.

However, the Duterte administration would be pursuing the same neoliberal policies that the previous presidents implemented. These policies, while enabling the country to register growth, made the country vulnerable to the profiteering schemes of economically stronger countries and the vicissitudes of the global economy. It also worsened social inequities. Even the International Monetary Fund has come to realize the negative impact of neoliberal policies.

“Government Financing Institutions shall come up with out-of-the box financing packages to capacitate our small and medium entrepreneurs.” This has also been the thrust of previous administrations. However, in the absence of government protection and promotion, small and medium term enterprises have been folding up due to import liberalization. These enterprises could not even compete with the big malls. How could these then survive amid the flooding of imported products?

President Duterte’s announcement that his administration would lower personal and corporate income taxes received a lot of cheers inside and outside the halls of Congress.

6. Road building and infrastructure projects – This has been the thrust of previous administrations as well.

7. Agriculture – “Road development projects shall complement with our thrust to provide modern agriculture, infrastructural by expanding and improving the construction and rehabilitation of roads and irrigation and establishing modern harvest and post-harvest facilities to minimize losses.”

“We shall also conduct a nationwide soil analysis to determine areas most suitable for rice farming to optimize production with the use of effective soil rehabilitation and fertilization.”

“We shall strictly enforce fisheries laws, particularly on illegal fishing and promote aquaculture along river banks and in backyards.”

Sorely missing in the President’s discussion of agriculture is what it intends to do with regards land reform. A genuine agrarian reform program would result not only in social justice but also in stimulating the rural economy.

“What we want is genuinely to reduce the vulnerabilities of our people, build resiliency and empower individuals, and families and communities.”

“The beneficiaries of 4Ps shall be made to become independent and self-reliant after they have graduated from the program. But the aim is to present it with other forms of assistance, so that they can stand on their own two feet.”

“But now, I have decided to direct the DSWD to provide the rice subsidies to the poorest of the families.”

“We are planning to increase spending on basic education and incorporate mandatory education about the evils of drugs. We will also intensify and expand Alternative Learning System programs.”

“The government will also provide universal health insurance for all Filipinos.”

“The professional competence and operational capabilities of government hospitals and health facilities will be strengthened.”

The rice subsidy and the inclusion of programs to enable the beneficiaries of 4Ps to earn a livelihood is a welcome development.

For education, there was no mention of the K+12 program, the spike in tuition and other fees in higher education institutions and the decreasing subsidies for state colleges and universities.

9. Women’s rights – “Consistent with our international obligations, in keeping with national mandates, this administration vows to protect women’s rights and human rights abuses against our women.” He called for the full implementation of the Magna Carta for Women, as well as the Reproductive Health Law.

10. Indigenous people’s rights – President Duterte especially mentioned the Lumad and told them that the Certificates of Ancestral Domain, the Indigenous Peoples’ Rights Act, and National Commission on Indigenous Peoples are there for their protection and development.

11. Traffic – President Duterte mentioned several measures to address the traffic problem: addressing perennial flooding of the streets, improving public transport through more trains and longer operating hours of commuter trains, revival of the Pasig Ferry Service System, maximization of usage of existing roads to include mapping out secondary routes, and intensification of anti-colorum campaign and out-of-line apprehensions. The President also asked for emergency powers from Congress to address the worsening traffic problem.

The bad and ever worsening traffic problem in the country, especially Metro Manila, was largely ignored by the previous administration. It is about time that the government does something about this.

12. Environment – President Duterte talked about the need for balancing the need of the country for industrialization and its commitment to mitigating the impact of climate change.

President Duterte ordered the review of all mining and logging permits. While he is not against mining, he admonished these companies to follow government environmental standards. The same applies to coal-fired power plants.

There was no mention about banning extractive, destructive mining for export, such as open pit mining. There was also no policy pronouncement about developing clean energy sources.

13. Corruption and abuse of power – The Duterte administration issued an executive order on Freedom of Information and pushed for the Whistleblower Protection Act. President Duterte also declared that the doors of Malacañang are open for complaints.

14. Other issues and measures
– One-stop-shop for application of permits and licenses for OFWs and
– Speeding up processes for application of clearances
– Extending the validity of driver’s licenses from three to five years and of passports from five to ten years
– More outlets for selling commuter train tickets
– Decongesting NAIA through maximization of Clark airport, with the construction of a train system, and Sangley point
– Free Wi-Fi access in designated public places

Surely, the general public would benefit from these.

Two themes characterize President Duterte’s first SONA: trying to make the system work for the people and a call for unity. President Duterte’s first SONA may have fallen short of the expectations of different sectors. But if he has his ear on the ground, would be true to his word that he would listen to the aspirations, as well as the complaints of the people and would not yield to pressures from powerful forces, groups and institutions, which surround Malacañang, with interests in maintaining the status quo, then there may still be some changes forthcoming.