“It is our future that is at stake here that is why it is only right that we speak out against it (Marcos burial).”

MANILA — Teen spirit was high on Nov. 25, along Padre Faura street in Manila, as throngs of mostly youth protesters marched their way to Luneta (Rizal) Park to the Black Friday protest. Their banners called for justice for victims of martial law, and anti-Marcos slogans “Marcos, taksil hindi bayani” and “Marcos, Hitler, diktador, tuta” They chanted “Sumama na kayo” to bystanders and on-lookers in Taft.

The youth has been leading the protest since the sneaky burial of ousted dictator Ferdinand Marcos Sr. at the Libingan ng mga Bayani on Nov. 18. They were even bashed and bullied by Marcos loyalists and supporters of President Rodrigo Duterte, young and old, who questioned their opposition against the burial.

At the program in Luneta, greying martial law activists stood side by side with the rising, younger generation of leaders, in a symbolic passing of the torch of the people’s struggle.

For Fidel Feria, 19, a journalism student in Colegio de San Juan de Letran, knowing that people died fighting against tyranny is enough for him to stand against the hero’s burial of Marcos. For him it was an insult to the victims and relatives to bury a man whose regime murdered more than a thousand people.

He said that youths who are being misled should be educated, not insulted.

They said they were disappointed and felt bad for the victims after they have learned that Marcos was finally buried at the Libingan ng mga Bayani. They joined the protest in Katipunan without any second thought.

Andrea Dimayacyac, 20, an accountancy major from the University of the Philippines-Diliman has relatives who were at the historical 1986 People Power, and said it was from them that she learned about dreadful martial law stories.

“You don’t have to be actually there to have a stand on the issue. For us, hearing their stories are enough to believe that Marcos committed crimes against the Filipino people,” she told Bulatlat.

Diana Bai, 21, another accountancy student in UP-Diliman said their presence at the protest is also to break the impression that millennials do not know anything that happened during martial law.

“There is no excuse to be ignorant about the past,” said Bai, adding that true stories of martial law can be learned outside the four corners of their classrooms.

She said to be silent means favoring the dictatorship and letting the perpetrators get away with their crimes. “His burial is normalizing all the wrongdoings of the Marcoses in the past. It’s like, we are just accepting it and we cannot do something about it, and it’s frightening,” she added.

Dimayacyac said they joined the protest to let people know that they will not let another dictatorship happen again. “It is our future that we are talking about here,” she said. 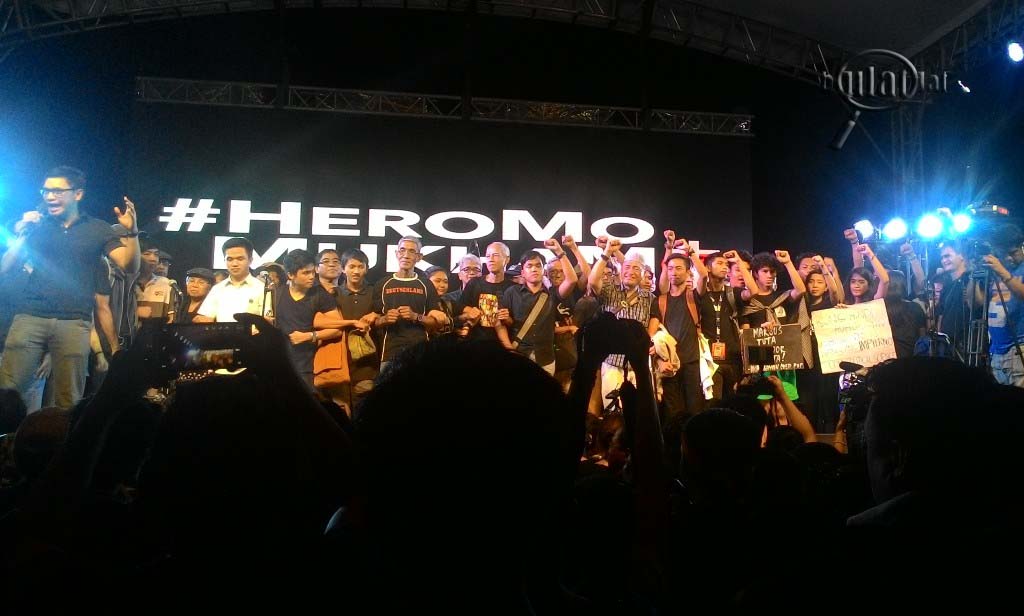 This is also the stand of Aya Escandor, granddaughter of Dr. Juan Escandor, a doctor who joined the underground movement to fight the dictatorship and got killed.

“It is our future that is at stake here that is why it is only right that we speak out against it (Marcos burial),” she said in a program at the Philippine General Hospital.

The next generation standing up for the truth

JC Mijares Gurango, 19, grandson of Primitivo Mijares, the chairman of the Media Advisory Council during the Marcos dictatorship, was also present at the protest. He said the youth of today who believes that martial law was good for the country are misinformed and misled. He said it is okay to be misled, but the youth should be critical. “They should seek the truth and if they find out what the truth is, they should stand for it,” he told Bulatlat.

Primitivo, the author of The Conjugal Dictatorship of Ferdinand and Imelda Marcos disappeared months after the book’s publication. His son, Boyet who was still a teenager then was brutally killed. The book exposed the truth about the Marcoses as the author worked closely with them.

In his speech at the program, Gurango expressed his anger that Marcos is buried as a hero. “This is about justice and what they did that were truly unforgivable,” he said.

Mark Belardo, 21, a film student in UP-Diliman said he read about stories and did his research of what truly happened during martial law. His parents were also present during the 1986 People Power.

“There is much information online. As a millennial, we should seek out the truth and stand for it. Otherwise we are just letting history repeat itself,” Belardo.

Al Omaga, chairman of progressive youth organization Anakbayan-UP Manila, said that youth should take their stand because they are still enduring the effects of policies imposed during the time of Marcos like deregulation, privatization of government hospitals and education, as well as the ballooning foreign loans that, he said, their children will also have to pay in the future.

He said the youth should continue what the youth of the martial law era has started, especially after Duterte allowed the burial of Marcos. “This is historical revisionism and there is a need for the youth of today to continue the progressive, legitimate and true struggle of the people.”