‘Political prisoners are not criminals’ – kin

“If he [President Duterte] really wants to release political prisoners, he could do so.

MANILA — Since December 3, Maria Ortiz, 73, has been keeping vigil at the foot of Chino Roces (formerly Mendiola) bridge. For three days, she has been skipping meals, eating rice only on Dec. 6 upon the advice of a doctor.

Ortiz, who travelled all the way from Macalelon, Quezon, is hoping President Rodrigo Duterte would fulfill his campaign promise to release all political prisoners. “Why is it that political prisoners like my sons remain in jail? ” she said in between coughs.

Ortiz said her sons who were accused of heinous crimes were not criminals but activists jailed for their convictions.

Navia, 62 and his wife Margie, 51, were arrested by intelligence agents in plainclothes on October 23, 2008 in Alaminos, Pangasinan. The couple, both peasant organizers, was charged with murder, frustrated murder, robbery, kidnapping and illegal detention and rebellion.

After seven years, all the charges against Navia were dismissed. “No complainants or witnesses came to court hearings,” he told Bulatlat in an interview. 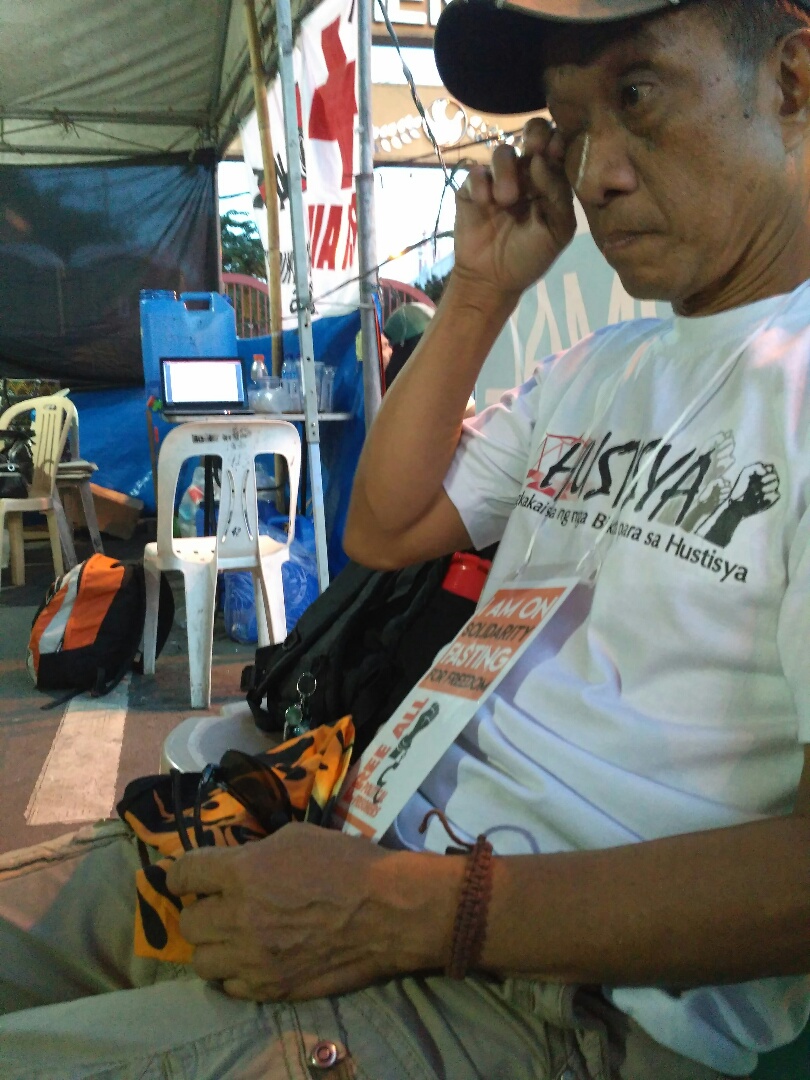 Meanwhile, one witness was presented in one of the cases filed against his wife. An Army officer claimed that Margie was one of the New People’s Army guerrillas who ambushed soldiers on Nov. 10, 2006 in Gumaca, Quezon. “The witness said he did not see her face but only her back. He also said that my wife used three different firearms. Our lawyer said my wife could have been Fernando Poe Jr,” Navia said.

Navia said he and his wife faced difficulties in prison. Both of them were detained at Fort Bonifacio, the headquarters of the Philippine Army.

They were subjected to mental torture. Navia said soldiers let them hear someone wailing in pain. Other times, soldiers said, “Are they the ones who killed our colleagues? Who should we deal with first, the man or the woman? ”

Navia, who was wearing shades during the interview, said his eyes hurt when exposed to brightness. For seven years, Navia and Margie were blindfolded whenever they were taken to court hearings. That meant ten hours of travel from Fort Bonifacio to Gumaca and back.

Navia was released Sept. 29, 2015 while his wife has been transferred to Camp Bagong Diwa in July this year.

Like Navia, Gloria Almonte was also imprisoned for almost two years. Not one complainant or witness came forward in court hearings for the charges filed against her.

Gloria has been released on bail but her husband Dionisio, 58, remains in jail.


The Almonte couple, both peasant organizers, was arrested on January 29, 2014 in Valenzuela City. Gloria said they just arrived home from Dionisio’s therapy for his slip disc when soldiers took them.

Besides back pains, Dionisio has diabetes, prostate disease and had acquired pulmonary tuberculosis in jail. Gloria said Dionisio’s medicines cost more than P2, 000 a month. Jail authorities provided only medicines for TB after the family sought assistance from the Department of Health’s TB DOTS. They rely on donations from supporters.

Gloria said the food in jail is not suitable for Dionisio. “He washes the vegetables, which were always salty. We bring him crackers, which he eats whenever he can’t take the food ration,” Gloria said.

“The government says we have to go through the process but their so-called due process is too slow,” Gloria said. “We are not criminals. We killed no one. We did not steal. We are only working to build a better future for the majority of Filipinos. ”

Gloria said she and her co-accused in rebellion charges filed in Gumaca local court have been expecting the dismissal of the charges. However, the hearing last October has been moved to March 2017.

“If he really wants to release political prisoners, he could do so, ” Gloria said.

Navia said they are ready to continue their protest actions to compel the Duterte administration to heed their demands.