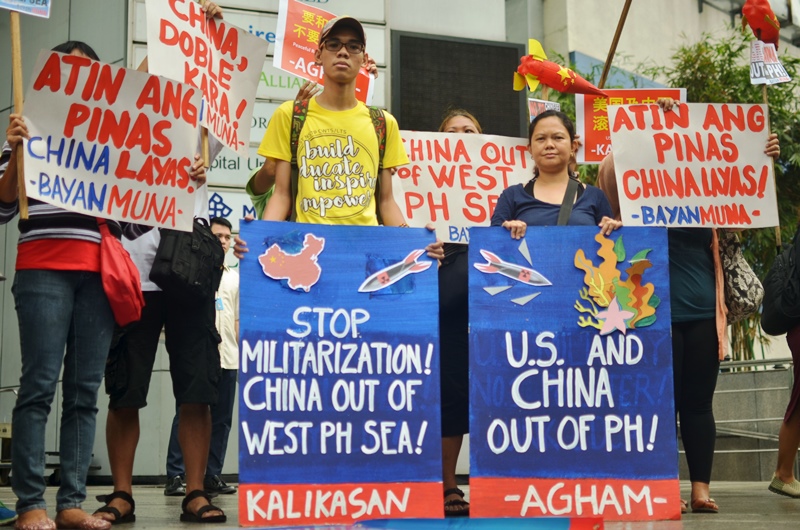 “The seven military outposts of China across the West Philippine Sea has put crosshairs on its various ecosystems and fishing grounds.”

MANILA – Green groups led by Kalikasan People’s Network for the Environment and Bayan Muna Partylist held a picket protest this morning, January 24, in front of the Chinese Consulate in Makati City. They are demanding the pull-out of Chinese military forces in the Spratlys Islands in West Philippine Sea (South China Sea). As an alternative, they are pushing the Chinese and the Philippine governments to settle the dispute concerning the area through diplomatic negotiations instead.

The environmentalists have been raising the alarm on the building of missile bases across various reefs in the Spratlys by the Chinese government. Clemente Bautista, the national coordinator of Kalikasan PNE, said this is not only provoking tension but also worsening the degradation of marine ecosystems.

China has reportedly reclaimed a total of 1,294 hectares of shoals and submerged islets, destroying precious coral reefs and other marine ecosystems in the process of building artificial islands and constructing military bases and missile defense systems in the Spratlys (Kalayaan Group of Islands). In April 2015, a Chinese Foreign Ministry spokesperson has confirmed that after finishing with the reclamation, they expected the islands and reefs to provide “comprehensive services to meet civilian demands and satisfy the need of necessary military defense”.

China has pursued these activities without the consent of the peoples in the surrounding states.

Kalikasan said reclamation and militarization do not bode well for the marine wealth of the West Philippine Sea, which is known to hold the third biggest expanse of coral reefs in the world. These reefs serve as home to 3,365 known species of fish and generate a yearly catch of 16.6 million tons of fish, according to various authorities.

Before the reclamation and building of Chinese military installations in the area, which Kalikasan branded as “an ecological time bomb” in 2015, the Spratlys group of islands contains one of the most preserved and biodiverse reefs in the world. The area is contiguous to Tubbataha Reef and part of the great Coral Triangle, the center of marine biodiversity in the world. More than 120 million people, mostly Asians, are the first to lose out as they depend on its marine resources for food and livelihood.

This year as the Chinese government ramps up the military use of Spratlys, the public losses can only increase because with the operation of a military installation are routine massive releases of toxic and other harmful materials on marine life. This is on top of added risks of armed confrontation between military forces, which again pose more risks of marine pollution.


“The seven military outposts of China across the West Philippine Sea has put crosshairs on its various ecosystems and fishing grounds. Even with China’s declaration that Filipino fisherfolk can now return to the various traditional fishing grounds across the disputed waters, it is unsafe to fish in an area where tensions could lead to armed conflict,” said Bautista of Kalikasan PNE.

They said forging a multilateral agreement with the different claimant countries on sustainably managing the region’s marine resources, promoting scientific research and development and ensuring peace and respect of sovereignty in the troubled waters should have been China’s priority if it really wants peaceful diplomacy.