Kin of victims of drug-related killings set to seek justice

Dee Ayroso February 12, 2017 drug related killings, Rise Up for Life and for Rights, war on drugs

“We are here. We are ready to fight for justice.”
By DEE AYROSO
Bulatlat

MANILA – After Ernesto “Eric” Tapang was shot dead by suspected police vigilantes outside his home in Sampaloc, Manila in late January this year, his community has since been gripped in fear.

Tapang, 51, was unemployed and had a liquor problem. But he did not have a drug problem, he had no criminal record or any known enemies, nor was he in the drug watch list. In fact, he was popular as “Brader” (brother) – a regular nice guy known for playing good music on his guitar and being helpful around his neighbourhood. At 2 a.m. on Jan. 25, he had dozed off on a bench in front of his home waiting for his son when four men in an SUV came by and took turns shooting him. He died from at least 18 gunshot wounds.

“Nobody is safe anymore…People are afraid, because they knew my brother was not an addict, and yet he was killed,” said Tapang’s sister, Beth Tapang-Generoso. “Kahit sino na lang (They will kill just anyone),” she told Bulatlat. Before Tapang, three other men were killed in the neighbourhood, also by suspected vigilantes.

This climate of dread prevails not just in Tapang’s neighborhood, but in many other urban poor communities where President Duterte’s war on drugs has taken its toll – now reaching up to 7,025 killed from July 2016 to Jan. 21 this year, said a report by Amnesty International. Of these, 2,500 were killed in police anti-drug operations.

Amid the terror and grief, families of victims have mustered the courage to call for justice for their kin, and to speak out against Duterte’s war on drugs, which, they said, has succeeded – not in curbing the drug problem – but only in violating human rights and dividing communities.

Generoso and her sisters were among the dozens of families from seven cities in Metro Manila who came to a gathering on Feb. 11 in Quezon City, led by Rise Up for Life and for Rights. Rise Up is a “network in defense of life and protection of human rights against drug-related extrajudicial killings and violations.” It was formed last year in response to the growing number of victims of Oplan Tokhang and Double Barrel – President Duterte’s war on drugs.

Nardy Sabino, Rise Up spokesperson and secretary general of the Promotion of Church Peoples’ Response (PCPR), said families of victims will soon become a gathering storm that will hold the government accountable for the killings. In a few weeks, they expect to file counter-charges against identified police perpetrators, he said. The National Union of People’s Lawyers (NUPL) provides free legal services to the victims’ kin.

Rise Up also unites efforts from various religious denominations and community organizations in the campaign against extrajudicial killings and to seek justice for the victims. It will also implement programs to support the victims’ families and help rehabilitate drug dependents.

On Jan. 30, Duterte halted Oplan Tokhang after police officers were exposed to have masterminded the kidnap-for-ransom and murder of a Korean national. But the momentum of the killings has hardly waned. Sabino said the network hopes to unite people against this climate of impunity and fear.

“We are here. We are ready to fight for justice,” said Sabino. 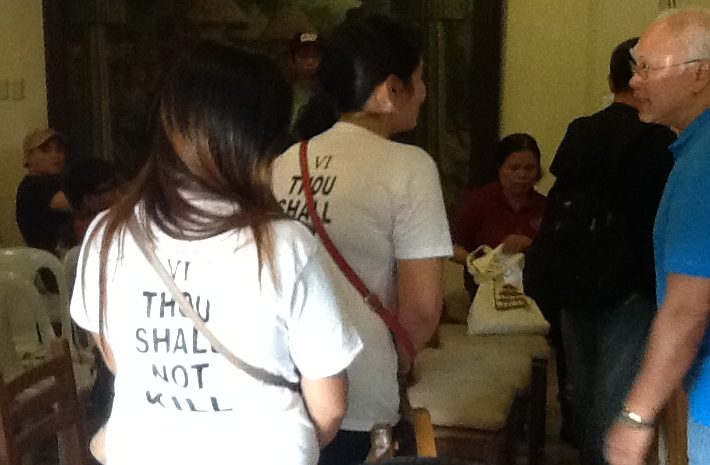 Women dominated the Feb. 11 gathering, mostly widows, mothers and sisters of slain victims. Some of them carried pictures of their loved ones. Several had small children in tow. Tears flowed as they recounted similar incidents of killings: victims felled in their own home, either by identified police men, masked motorcycle riders or barefaced gunmen.

It was a gathering reminiscent of those 10 years ago, under President Gloria Macapagal-Arroyo, except that the victims then were not branded as “pusher” or “addict” – they were activists tagged as “New People’s Army members or supporters.” Still, the methodology, brazenness and brutality were the same, as were the perpetrators.

Evan Hernandez of the group Hustisya was present at the gathering. She told Bulatlat that families of victims of the war on drugs can find solace and strength among themselves, just like how victims of human right violations under Arroyo united and found their voice as a group. She said victims’ families are afraid.

“We have to reach out to them. We have to raise their awareness,” she said.

Many of those at the gathering were heartened to hear about NUPL’s legal support to their possible counter-charges.
NUPL secretary general for the National Capital Region lawyer Krissy Conti spoke at the gathering and said many families of slain victims did not consider filing charges against police perpetrators.

“They have no money for filing fees, they just want to get things over with and move on with their lives. But then you realize: the same thing is happening to your neighbours, and the number of victims is increasing,” Conti said.

As victims’ families are emboldened to fight back, she said filing even just a few cases against abusive policemen will help shatter the climate of impunity. “We hope to break that,” she said.

Solution to drug problem should be a community effort

Fr. John Era, a US-trained psychologist belonging to the Congregation of the Mission, spoke at the gathering and said society should stop blaming the drug addict, and instead start to reflect on the accountability of the community, the social institutions and, of course, government.

He said being labelled as a drug addict carries a stigma that one is a “a bad person.” “We have forgotten that we are also part of the problem,” Era said.

He said the common perception of drug dependents is that they have genetic and psychological vulnerabilities, which make them prone to drug addiction. Maybe it runs in the family, or the person is prone to depression and turns to substance abuse. But, he said, an important third factor has been mostly overlooked: the environment, referring to the family, community, society.

Era said the link between protective and risk factors in the individual and in the environment determines one’s vulnerability to drug addiction. Protective factors refer to the child’s impulse control, parental monitoring, academic competence and strong neighbourhood attachment.

Risk factors refer to early aggressive behaviour, lack of parental supervision, exposure to substance abuse, availability of drugs, and poverty. If protective factors outnumber the risk factors, a child will most likely not turn to drugs, and vice versa.
Those without resources, or the poor, are at high risk to drug addiction, Era added.

Era cited the story of “Nicanor,” a former drug addict in Negros province who successfully rehabilitated himself. Nicanor was an abused child from an urban poor family, living in a community where drug addiction was prevalent. He was already a drug addict when he came to know of a group of outgoing youths in the local church. He joined their activities, and they became his friends, which made him happy enough that he no longer needed to get high on drugs.

Such success story can be replicated only if the government and the public look at “the bigger problem” surrounding drug addiction, Era said.