Seven Reasons Why We Should March for Science

Scientists around the globe are speaking out and standing up to defend science in the face of efforts to reject and silence scientific knowledge from public use. On Earth Day 2017, they will march, together with the people, to support the development of science and technology that truly serves the interests of the majority.

Donald Trump’s anti-science tirades and policies sent shockwaves across the US scientific community, prompting scientists to take a stance by organizing a protest action popularized as the March for Science. This initiative snowballed to what is now called the  #GlobalScienceMarch, with hundreds of satellite marches (517 as of writing) across the globe, including one here in the Philippines.

The local leg, led by AGHAM – Advocates of Science and Technology for the People, is dubbed the “March for Science, Environment, and the People,” cognizant of the interrelated and indivisible nature of the three. Filipinos will march for a pro-environment and pro-people science geared towards genuine development.

There are a million reasons why scientists, science advocates, and the people in general should join the march on April 22. Here are seven reasons for starters:

#1: Because science is under attack. Who else should defend it?

A blitzkrieg of attacks against science was unleashed by the Trump administration shortly after its inauguration. The actions — ranging from the silencing of research institutions and cutting back of research budgets to denying the existence of climate change — affect a wide range of scientific information which could have been used for the benefit of many people especially those from the marginalized.

The recent constraints on scientific knowledge in the US have long been happening in countries like the Philippines. Our underdeveloped science and technology have made us reliant on advanced countries to provide us with crucial scientific data, such as climated-related data, to craft domestic policies and plan disaster reduction and mitigation measures. Cutting the public’s access to information could significantly impair our efforts to increase community resiliency.

We should stand with our foreign counterparts in defense of science and everything it represents. As the cliché goes: if not us, who? If not now, when?

#2: Because Filipino science must be developed and supported.

Our march will not end with the celebration of science; we also call for its development.

The state of Filipino science and technology (S&T)  today is a far cry from what is needed by our country. Our share in global international research publications is negligible at 0.055% (2013), while domestic patent applications remain foreign-dominated. This is hardly surprising since our expenditure for research and development remains miniscule at just 0.14% of our GDP, a small percentage of the international standard at 1%.

At a ratio of 270 researchers per million population, our researchers are not enough to meet the needs of our people. This stems from our economic setup’s lack of ability to offer opportunities for Filipino scientists to work here in the country, pushing them to look for greener pastures elsewhere.

The few that choose to work here decry the lack of job security, benefits, and other rights. Many S&T workers are affected by contractualization and are denied of basic workers’ rights. In UP Diliman, for instance, around 2,000 S&T workers are employed on a per-project basis, with no assurance if they can continue working once their project ends.

#3: Because we need to reaffirm science as a public good.

Science has become more advanced but at the same time has become detached from and inaccessible to the majority of the people. This is sharply illustrated in the Philippine context: at a time where smartphones and social media are the norm in urban centers, farmers in the rural areas are deprived of such technological advances to improve agricultural production. They still employ carabao-pulled plows, a technology reminiscent of Mesopotamian times.

We must march to reclaim science to what it is supposed to be—a tool for societal development. As scientists, we strive to achieve this ideal, but our pursuit of this ideal is systematically impeded by the dominant social and economic structures that appropriate scientific knowledge and developments to the hands of an elite few. Reaffirming science as a public good must mean challenging this system to its core. 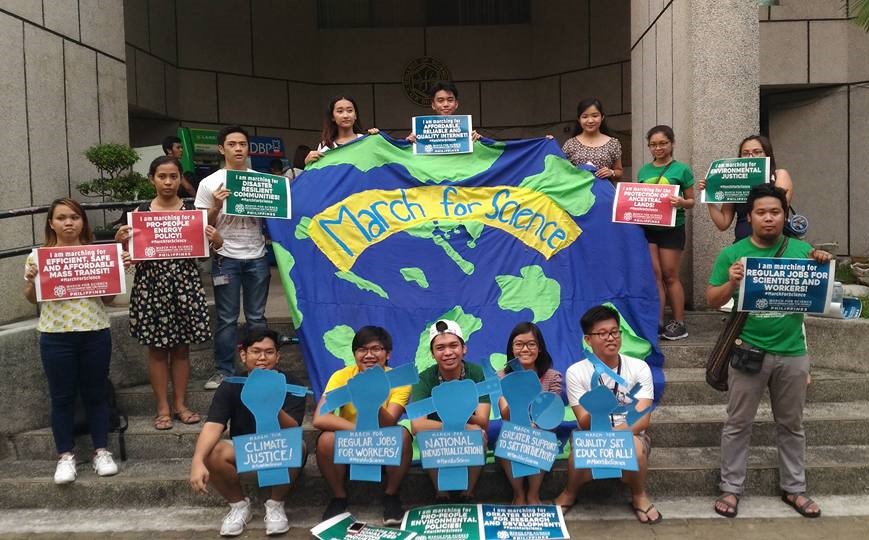 #4: Because our concern for science that serves the people is a concern for the environment.

Science is a double-edged sword. While we celebrate the good that it provides, we must also be cautious—or better yet vigilant—of the harm it could unleash to society. We need to actively ensure that S&T is being used to serve the majority.

One sad result of a profit-oriented economic set-up is the employment of technologies that lead to the destruction of the environment and the people it hosts. One stark example in the country is how mining technologies are used without regard for environmental and social consequences.

#5: Because we need to popularize science not just as a tool, but also as a way of thinking—as a culture.

Aside from emphasizing the economic importance of science and technology, we must also march for a science that permeates every aspect of our social being: how we think, act, and decide.

Our long and arduous history of colonial bondage has resulted to the prevalence of pseudo-scientific and outright superstitious beliefs, both in the cities and in the countryside. We will march to overturn this situation and promote a scientific mass culture that applies the lessons of science in everyday life.

#6: Because we owe it to the Filipino people.

Science was never meant to serve scientists alone. It is always the people that must ultimately stand to benefit from scientific breakthroughs and technological development. As a social good, science must be enjoyed and be of value to the masses of workers, peasants, ethnic minorities and other marginalized sectors.

Defending science will not be enough. We need to mobilize it for the benefit of the people.

#7: Because we have nothing to lose, but a universe to gain.

Marching for science will not make us less of anything. If anything, it will make us more human, especially to the eyes of the public. We need to shatter the idea that scientists are content with being cooped up in their sterile laboratories and being detached from society. Let us show them that we are active players in our collective struggle for a better society.

Marching for the development of science—a science that is oriented towards national development—holds a plethora of possibilities. One thing’s for sure: it will lead to a better life for the people who have long been denied of the benefits of scientific advancement.

The march on April 22 is by no means the start of scientists’ and the people’s fight, and it should never signal its end. We must celebrate this historic event with the view of continuing and strengthening our advocacy. March with us!

Below is the program for the March for Science, Environment, and the People. 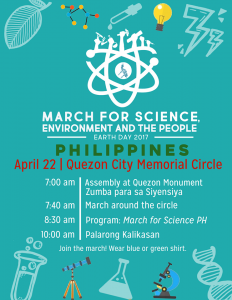