An update from Carl Olalo of Kilusang Mayo Uno in Southern Mindanao Region said that since 9:30 this morning, the armed men “brutally dispersed” the unarmed workers’ picket line in front of Shin Sun fruit packing plant. Reportedly present to witness the dispersal was Sheriff Medialdea of the Regional Trial Court in the area.

The attack on the picket line came a week since Martial Law was imposed on the whole island of Mindanao, and since elements of the Philippine Army’s 66th Infantry Battalion encamped inside the packing plant. 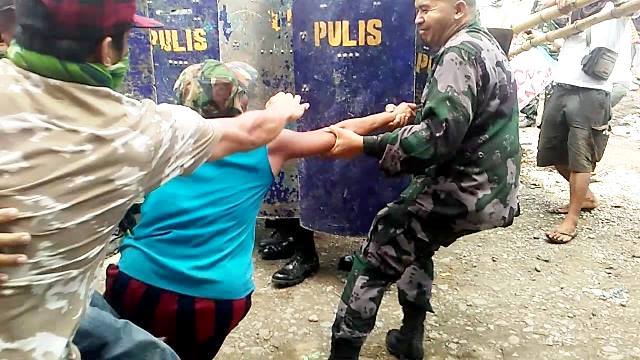 Olalo said the soldiers and police hogtied the arrested workers and beat them up. He added that the police hunted down the workers, giving chase to some or arresting strikers right from their homes. Before 11 in the morning, the police and the military have arrested and beaten up 14 workers, Olalo said.

As of this writing, members of the police force are still interrogating the workers, Olalo said.
The KMU-SMR strongly condemns this “barbaric acts” committed by the PNP and AFP against the striking workers.

On May 26 soldiers from the 66th IB of the Philippine Army had threatened the strikers with violence if they did not voluntarily removed their picket and stop the workers’ strike.
The said strike has been going on for nearly two months now. The union has over a hundred members among the 200-plus workforce of long-time contractuals. The company’s production has been shut down since the strike. The Korean management has reportedly not yet attended any scheduled negotiations with the workers, but it had taken in new contractuals under another manpower agency.