Bulatlat Contributors July 13, 2017 bombings, US intervention, US war on terror

The US bombing campaign is now the heaviest, nearly triple in amount of dropped bombs in Iraq and Syria alone, since the bombing of Vietnam, Cambodia and Laos in the 60s to 70s.

This is the state of war in the United States in July 2017.

The U.K.-based Airwars.org monitoring group has compiled reports of between 12,000 and 18,000 civilians killed by nearly three years of U.S.-led bombing in Iraq and Syria. These reports can only be the tip of the iceberg, and the true number of civilians killed could well be more than 100,000, based on typical ratios between reported deaths and actual deaths in previous war zones.

As the U.S. and its allies closed in on Mosul in Iraq and Raqqa in Syria, and as U.S. forces now occupy eight military bases in Syria, Islamic State and its allies have struck back in Manchester and London; occupied Marawi, a city of 200,000 in the Philippines; and exploded a huge truck bomb inside the fortifications of the “Green Zone” in Kabul, Afghanistan. 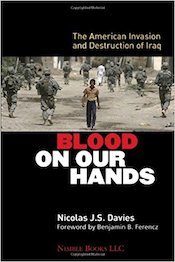 What began in 2001 as a misdirected use of military force to punish a group of formerly U.S.-backed jihadis in Afghanistan for the crimes of September 11th has escalated into a global asymmetric war. Every country destroyed or destabilized by U.S. military action is now a breeding ground for terrorism. It would be foolish to believe that this cannot get much, much worse, as long as both sides continue to justify their own escalations of violence as responses to the violence of their enemies, instead of trying to deescalate the now global violence and chaos.

There are once again 10,000 US troops in Afghanistan, up from 8,500 in April, with reports that four thousand more may be deployed soon. Hundreds of thousands of Afghans have been killed in 15 years of war, but the Taliban now control more of the country than at any time since the U.S. invasion in 2001.

The US is giving vital support to the Saudi-led war in Yemen, supporting a blockade of Yemeni ports and providing intelligence and in-air refueling to the Saudi and allied warplanes that have been bombing Yemen since 2015. UN reports of 10,000 civilians killed are surely only a fraction of the true numbers killed, and thousands more have died from disease and hunger.

Now Yemen is facing a humanitarian crisis and a raging cholera epidemic due to lack of clean water or medicine caused by the bombing and the blockade. The UN is warning that millions of Yemenis could die of famine and disease. A Senate bill to restrict some U.S. arms sales to Saudi Arabia was defeated by 53 votes (48 Republicans and 5 Democrats) to 47 in June.

Closer to home, U.S. Southern Command (SOUTHCOM) recently hosted a conference with the presidents of Guatemala, Honduras and El Salvador in Miami. This signaled a further militarization of the U.S. war on drugs in Central America and efforts to limit immigration from those countries, even as a report by State and Justice Department inspector generals held State Department and Drug Enforcement Administration (DEA) agents responsible for the killing of four innocent civilians (one man, two women and a 14-year-old boy) by machine-gun fire from a State Department helicopter near Ahuas in Honduras in 2012.

The inspector generals’ report found that DEA officials repeatedly lied to Congress about this incident, pretending the Hondurans were killed in a shoot-out with drug traffickers, raising serious doubts about accountability for escalating U.S. paramilitary operations in Central America.

Right-wing opposition protests in Venezuela have turned more violent, with 99 people killed since April, as the protests have failed to mobilize enough popular support to topple the leftist government of Nicolas Maduro. The U.S. supports the opposition and has led diplomatic efforts to force the government to resign, so there is a danger that this could escalate into a US-backed civil war.

Meanwhile in Colombia, right-wing death squads are once again operating in areas where the FARC has disarmed, killing and threatening people to drive them off land coveted by wealthy landowners.

Looming over our increasingly war-torn world are renewed U.S. threats of military action against North Korea and Iran, both of which have more robust defenses than any that U.S. forces have encountered since the American War in Vietnam. Rising tensions with Russia and China risk even greater, even existential dangers, as symbolized by the Bulletin of the Atomic Scientists’ Doomsday Clock, whose hands now stand at 2-1/2 minutes to midnight.

Although our post-9/11 wars have probably killed at least 2 million people in the countries we have attacked, occupied or destabilized, U.S. forces have suffered historically low numbers of casualties in these operations. There is a real danger that this has given U.S. political and military leaders, and to some extent the American public, a false sense of the scale of U.S. casualties and other serious consequences we should look forward to as our leaders escalate our current wars, issue new threats against Iran and North Korea, and stoke rising tensions with Russia and China.

This is the state of war in the United States in July 2017.

More articles by NICOLAS J S DAVIES
Nicolas J S Davies is the author of Blood On Our Hands: the American Invasion and Destruction of Iraq and of the chapter on “Obama At War” in Grading the 44th President: A Report Card on Barack Obama’s First Term as a Progressive Leader.