The 2018 budget for public hospitals was cut by P1.5 billion.

MANILA – Progressive health groups warned of more deaths among poor Filipinos, as they denounced how the proposed 2018 budget for direct health services was slashed by P1.5 billion ($29 million), which, they said, impairs delivery of critical health services.

While the proposed budget for the Department of Health (DOH) increased from this year’s P148 billion to P164 ($2.9 billion to $3.2 billion) in 2018, the Alliance of Health Workers (AHW) said, a big chunk of it is allocated to PhilHealth and lump sum funds centralized at the DOH.

The budget for maintenance and other operating expenses (MOOE) was cut, and there is zero allocation for capital outlay. The group is demanding that government gives significant increase to the health care delivery system, as well as to public hospitals, for the benefit of the poor majority.

“MOOE is the lifeblood of the hospitals as it is the main source of funding for the basic hospital needs of the patients,” said Robert Mendoza, AHW chairperson said in a press conference on Aug. 30, Wednesday.

Funds for patients’ hospitals needs such as medicines, IV fluids, reagents used for diagnostics, laboratory procedures and others essentials to patient care is sourced from the MOOE. With a smaller MOOE budget, public hospitals are forced to collect fees to augment its budget for operations.

The Coalition for People’s Right to Health (CPRH) has criticized government spending on PhilHealth, which has been increasing every fiscal year. The group said it could benefit more people if PhilHealth’s budget is allocated to direct services in public hospitals.

The MOOE of 66 DOH-retained hospital was cut by P1.5 billion for next year’s budget, as the budget for public health care system was also reduced by P17.5 billion ($342 million).

The Research Institute for Tropical Medicine (RITM) is one of the government hospitals to receive lower MOOE budget.

Romeo Garcia, president of the RITM employees association said the hospital is now collecting P125 ($2.45) for first-time patients, while consultation fee for every follow up check-up is at P50 ($1). Unlike at the Philippine Orthopedic Center where most of the services are for free, Garcia said, almost all services in RITM now have fees.

The RITM specializes in infectious diseases. This is also the go-to hospital for animal bite treatment. Garcia said many of their patients are not only from Metro Manila, but from other regions, most of them indigent. While PhilHealth has a subsidy package for animal bite patients, Garcia said, many still shell out money for other services.

“Services in public hospitals should be free. But this is not happening,” said Garcia in an interview. But instead, the hospital management is instilling the notion to people that if you have money, you should pay. 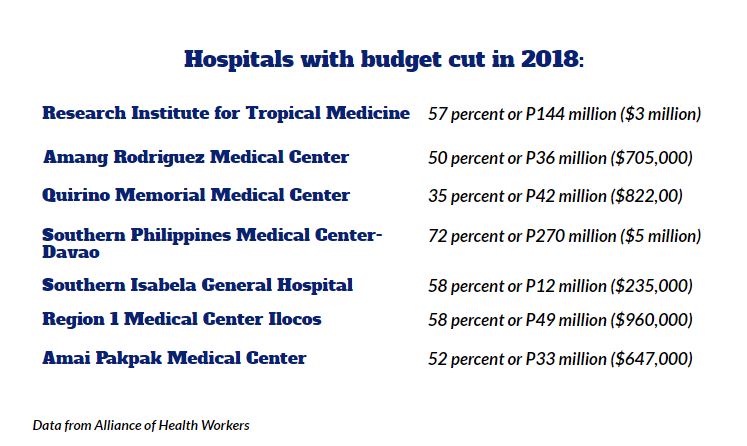 The AHW also criticized the huge allocation to the lump sum budget that is centralized in the DOH. These items are: purchase and allocation of drugs and medicines, which is P18 billion ($352 million) and vaccines and assistance to indigent patients, at P4.3 billion ($84 million).

Mendoza said it is up to the DOH’s discretion where this allocation would be spent. “There is no guarantee that this will be for the benefit of the Filipino people,” he said.

There is zero budget for capital outlay, hospital improvement and purchase of hospital facilities.

“What is the use of your PhilHealth card, if the hospital lacks equipment, laboratories and pharmacy supplies?” said Dr. Eleanor Jara, CPRH co-convenor.

She said cardholders have reported that PhilHealth cards in certain cities and rural areas are useless as government or local hospitals are still ill-equipped.

“Patients and their relatives are forced to buy prescribed medicines in private pharmacies outside the hospital and spend for laboratory and other procedures in privately-owned facilities,” said Jara.

“Of the claims paid to indigent-National Household Targeting System sponsored program, only six out of 10 were paid by the PhilHealth in 2016,” she added.

Dr. Joseph Carabeo, Health Alliance for Democracy (Head) secretary general also cited an incident in a government hospital in Iloilo where a patient’s bill worth P200,000 ($3,915) was not paid in full under PhilHealth’s No Balance Billing.

“Only 14 percent was reimbursed by the hospital because the balance was to be deducted from the hospital’s MOOE,” he said, adding that hospital directors have no other choice but to collect fees. “As PhilHealth’s own data show, patients’ out-of-pocket expenses are still at 58 percent,” he said.

“Instead of allocating P57 billion to PhilHealth, why not realign it to direct services?” asked Mendoza.
Meanwhile, Jara said that while the government boasts of its health insurance which supposedly covers the poorest of the poor’s medical and hospital needs, many Filipinos are still dying of infectious diseases which are preventable and curable, such as tuberculosis and pneumonia.

Quoting former Social Welfare Secretary Judy Taguiwalo, Carabeo said, the government has enough money to spend for basic social services. But unlike Taguiwalo, he said, Ubial has no intention of utilizing these funds to provide social services to the poor.

“She said in media reports that she cannot do anything about these budget cuts, but the truth has come out from former government official Judy Taguiwalo: that government has money. It just has to be spent in the right direction, we want a health secretary who will stand with us,” Carabeo said.

However, health services would be far from reach by the poor majority as the government targets to corporatize public hospitals. Mendoza said this is all in line with the DOH Healthcare Financing Plan which by year 2020, government will no longer subsidize government hospitals.

Jara said the CPRH is determined to fight for the people’s right to health.

“We believe that the state should provide free health services to the people using government funds. Doing otherwise, or creating laws that will shortchange this premise, deprives Filipinos of their right to health as enshrined in the Constitution,” she added.