“The people are fed up with the killings and continuing plunder of the country’s resources.”

MANILA – Blaan leader Minda Dalinan, 38, sports a ready smile and moves with the musical ping of tiny handmade brass bells in her belt. She may not look like it, but she has suffered from militarization in the course of defending with her community their ancestral lands. Dalinan is secretary general of Kaluhhamin (Kahugpongan sa mga Lumad sa Halayong-Habagatang Mindanao or Unity of Indigenous Peoples in Far-Southern Mindanao). She has experienced being under surveillance as she moved from one lumad community to another in Mindanao. Her organizing efforts among her fellow lumad, their collective defense of their ancestral lands in Mindanao, have frequently been questioned and threatened by state troops.

She grew up as a bakwit. Her father was a lumad leader who, in 2004, asked her with his dying breath to never let up on defending the tribe’s ancestral land and sources of livelihood. Her father was killed allegedly by members of the Civilian Armed Forces Geographical Unit, with soldiers from the Army’s 39th Infantry Battalion looking on.

After years recounting the incidence of her father’s death, Dalinan can now recall parts of it without tearing up. She remembers how she had rushed out of their house to help her father, the vain scramble to stanch the flow of his blood as he lay on the ground dying from multiple gunshot wounds. Her father was active in their community’s defense of their ancestral land against attempts of a mining company and a pomelo plantation to enter and exploit it.

Dalinan told Bulatlat that despite the killing of her father, their community went on to resist the attempted mining operation and plantation.


But the killing continues, as do the attempts of various corporations to encroach into their lands. In 2012, Dalinan and her fellow Blaan tore up forms of the so-called free, prior and informed consent brought to their community by the staff of the National Commission on Indigenous Peoples. The said forms, when signed, would have paved the way for the mining and plantation projects which would displace the indigenous communities.

Now under the Duterte administration, she said, their situation has worsened with martial law in Mindanao. “The military has more power now, trumping even the town and city mayors,” Dalinan said.

“Lack of an identification card could land you in jail, bring torture, bring a risk of being forced to serve the military as a guide or a snitch against the rebels,” she said. Martial law restricted their movements because many don’t have an ID. “It is costly and time-consuming for the indigenous peoples to get any government-issued ID.”

Dalinan herself had to spend up to P150 ($3) for transportation, travel 127 kilometers, just to get to a government office to apply for an ID.

Every person on the road and on the farm becomes suspect if he or she has no ID, and that restricts their movement, she said. Members of the community can’t work on their farm. They go hungry. More become evacuees. She said martial law is being used to drive away the people from their lands and forcibly bring the environmentally destructive projects into their ancestral lands.

A day before the planned big rally to commemorate Martial Law, advocates for the environment launched on Wednesday, September 20, a broad coalition against extrajudicial killings and the return of Martial Law.

“Environmental advocates have come together under EARTH (Environmental Advocates against Repression and Tyranny in defense of Human Rights) to expose and oppose human rights violations and tyranny under the Duterte Administration. Too many of our fellow environmental defenders have been killed and our communities displaced by Duterte’s bloody wars against the people,” said Clemente Bautista, national coordinator of Kalikasan People’s Network for the Environment and co-convener of EARTH.

As of Duterte’s first year in power, members of the EARTH coalition noted that 23 people active in issues concerning the environment have been killed.

“It is not surprising since the government is arming groups and forces to protect investors in mining,” said Lia Alonzo of Center for Environmental Concerns (CEC).

Duterte’s triple wars (war against drugs, against Muslims and “insurgents”) are actually wars against the people, said Fernando Hicap, chairperson of Pamalakaya. He traces to poverty and joblessness the growing problem of drugs, and to landlessness the growing “insurgency” and the Moro question. To these problems, Hicap said, the Duterte administration should have been responding with real solutions such as genuine land reform, genuine jobs generation, peace talks.

“Instead, he resorts to war and tyranny,” Hicap said of Duterte. He cited the killing of 19 peasants in Kilusang Magbubukid ng Pilipinas-Southern Mindanao Region from June 2016 to this month; the killing of a couple opposing reclamation in Negros, the bombing of communities in Cordillera. All of which, he said, stemmed from land disputes.

The solution is not war and killings but genuine land reform, Hicap reiterated at a press conference and launch of EARTH coalition. He said the country’s drug problem will not likely become as worse if the people had decent-paying jobs, livelihood, and housing.

Hicap condemned President Duterte’s “hypocrisy” with regard to Sept. 21, the anniversary of former strongman Ferdiand Marcos’ declaration of Martial Law.

Thousands are gearing up to protest martial Law and President Duterte himself has branded the day as “a day of protest.” He was reported to have welcomed and encouraged government employees to join the Sep. 21 protests. But, Hicap said, Duterte has only been pretending to be taking the cudgels for the people even if in reality he is working against the people’s interests.

“It is clear he is sabotaging the growing protests against his tyranny,” Hicap said as he noted the actions of other government offices which try to sow terror and inconvenience the protesters. For example, the reported unwillingness of the National Parks Development Committee (NDPC)to allow the protesters to use the bigger part of the park on Thursday, Sept. 21; and the reported threats to declare martial law if the protesters stirred up more trouble during the rally.

“The people are fed up with the killings and continuing plunder of the country’s resources,” Clemente Bautista of Kalikasan said at the launch of EARTH coalition. He warned that Martial Law will not only endanger the people but also the environment.

He recalled that under Marcos’ Martial Law the most environmentally destructive projects were implemented – “300,000 hectares of forest lands were cleared every year; thousands of coastlines were reclaimed, damaging mangroves and swamps; dams were built submerging villages and destroying rivers, farmlands were forcibly converted to give way to export processing zones.

All these, unfortunately, may be copied or repeated under the Duterte administration. According to Cleng Julve of Agham (Advocates for Science and Technology for the People), Duterte’s “BBB” or Build, Build, Build is slated to revive the mothballed and protested destructive projects such as the Laiban Dam, Chico Dam, Bataan Nuclear Power Plant, and big reclamation projects.

She warned that much like in Marcos’ Martial Law, the Duterte administration is leaning more and more to “quick fix” to ‘peace’ and quiet via repression, fascism, and military harassment. 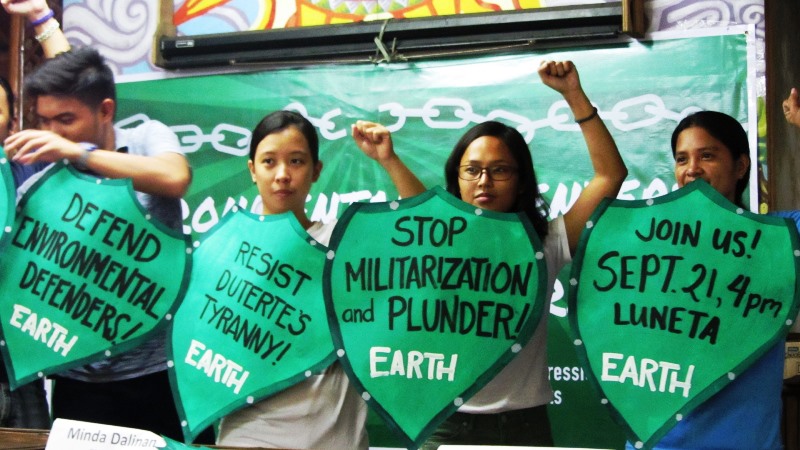 Thirty environmental activists have been killed under Duterte as they opposed his so-called development projects, Julve said. She added that they formed EARTH coalition to help stop the killings. It groups environmental organizations and environmentalist individuals who believe that “the people have the right to express their dissent against projects or policies they believe will lead to environmental deterioration and destruction of communities.”

EARTH conveners said at the press conference that they will join the Sept 21 protests, among others, and invited the public to join future actions in defense of the environment.

As for Dalinan, she said their Lakbayan ng Pambansang Minorya is also set to join the Sept 21 protests. After Sept 21, they are set to go back to Mindanao where, she hopes, martial law will someday be lifted.

Resource-rich Mindanao is the site of environment-related killings at a rate of six in every 10 cases. Where Dalinan lives in North Cotabato, the tribes are battling mining giants such as the likes of Sagittarius Mines and its foreign mining partners. Its commercial operations have been pushed back several times by people’s protests. Dalinan said the company may or may not transfer their stake to another company, but the fact remains that the indigenous people will continue to defend their ancestral lands against the continuing attempts to start commercial mining operations.