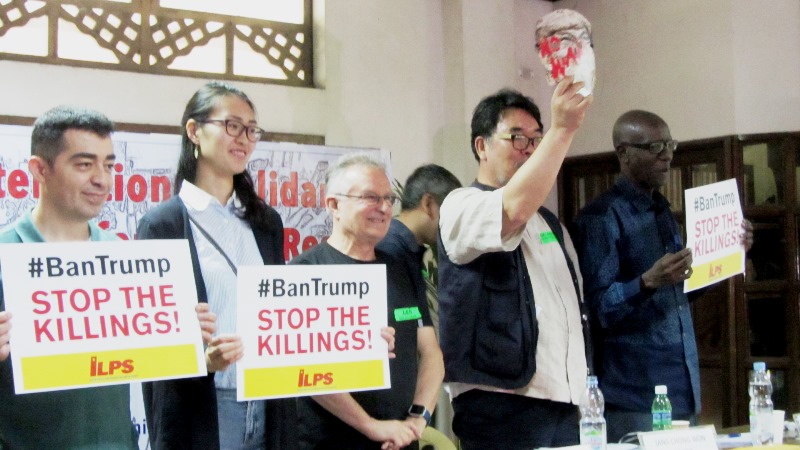 Dubbed as the International Solidarity Conference to resist US Imperialist-led War and Build Just Peace, panelists from the International League of Peoples Struggle (ILPS) tackled the different faces of militarism and war.

MANILA – The same week the ASEAN leaders were meeting in Manila, another international conference was held in Quezon City tackling topics which the Philippine police did their best to prevent the ASEAN heads from hearing. As members of activist groups marched to the venues of ASEAN meeting each day from November 12 to 14, the police blocked their way and used sophisticated equipment to drown out their programs. The groups were trying to bring up the results of peoples workshops. It included alternatives to the policies the ASEAN leaders and visiting US president Donald Trump are cobbling together.

Dubbed as the International Solidarity Conference to resist US Imperialist-led War and Build Just Peace, panelists from the International League of Peoples Struggle (ILPS) tackled the different faces of militarism and war. Among others, their members from the Asia-Pacific discussed updates on militarism in Japan, the Korean peninsula, Indonesia, and the Philippines. They also had guests and members who discussed the US-led militarism and wars in Africa and the Middle East.

At the opening of the solidarity conference, Len Cooper, vice-president of ILPS, said they held this meeting here at this time also “to seize the opportunity to protest the policies they (ASEAN and US) are doing.” He said these policies of militarism and neoliberalism have a bearing on the people, affecting their wages and conditions and undermining their democratic rights.

He noted that before this week’s ASEAN meet and the arrival of US President Donald Trump, there were massive mobilizations in South Korea and Japan against the policies of neoliberalism and militarism.

Neoliberalism is a set of policies promoting free-market capitalism as the best, or to them the only way, to ensure growth and prosperity, albeit for a few. But to the progressives, this is mere propaganda. “How can there be a free market under monopoly capitalism?” they asked.


Neoliberal policies were crafted to save capitalism following its failure to continue increasing profits and amid protests and revolutions seeking a change from capitalism. Toward ‘free market,’ governments and global financial institutions proceeded to remove market controls and central or government intervention in the economy. It adopted policies of liberalization, deregulation and privatization, moves which gave capital greater freedom in doing business and reaping profits. Saying it’s seeking market freedom, government-owned public utilities, for example, are being privatized, and it was immediately followed by price hikes and various levels of user pays principle. Unions are being attacked and the security of tenure removed through contractualization schemes. Wages are being set by ‘market forces’ but these forces were not freely competing but monopolized by private business groups. Resources that used to be publicly owned were increasingly commodified or made available for private leasing or selling. Government subsidies for social services such as education, health, housing, among others were drastically reduced.

Because of neoliberal policies, the gap between the rich few and the poor majority in the world has been widening exponentially, at a scandalous rate. Development agency Oxfam’s 2017 report revealed that the top eight billionaires have as much wealth as the bottom half of the global population.

What imperialist governments did not remove but tried to hide, from the world and from each other, are the subsidies it continues to provide agro-industries, oil companies, and the military-industrial complex.

To curb and stifle protests that normally greeted these moves in countries adopting neoliberal policies, governments led by the US coupled neoliberalism with intensified militarism. Wars are also a source of profits for the military-industrial complex, as well as oil companies. The International League of Peoples Struggles (ILPS) is one of the responses of progressive groups of peoples from various countries. In meeting this week in the Philippines, Cooper said they hoped not just to protest together when the ASEAN leaders gathered but also to improve their organizing and coordination.

The US, which still has military dominance over other capitalist or imperialist powers, holds the largest number of military bases, war technology and troops. To members of ILPS and progressive groups in the Philippines, US President Donald Trump is just the new CEO of capitalist interests. They anticipated his Asian tour as meant to ensure US dominance in the Asia-Pacific region by pushing for economic policies and flexing its military might.

During the media event at the opening of ILPS conference, leaders of various organizations from Asia-Pacific countries, joined by guests from the Middle East and Filipinos, discussed the policies which, they said, make life more difficult to the majority of the people and prompt these people to organize and hold protest actions. They asserted that it is part of their human rights, but they are grappling with increased militarism.


Ellorin highlighted the increased militarism even of the police. In the US, she said, more and more Afro-Americans and Latinos are dying at the hands of the militarized police. This is happening as funded by the US defense budget.
Considering the problems of people in the US, Ellorin said at the ILPS, this is not the time for the US government to be making threats against North Korea. Nor is it the time to be expanding a militarist agenda in countries where the people are not posing threats against the US.

Similar to other leaders of peoples’ organizations from other countries, she said it is time to address the problems the people are suffering from – “a crisis of imperialism, more and more militarization abroad.”

Yuri Yuki from Japan joined the ILPS conference in Manila to deliver the message that the Japanese people “fully supports the Philippine people against Trump.” She called for the removal of all US troops in Japan and support for the other countries’ struggle to reject all US troops from the Asia-Pacific.

Before flying to Manila, Trump met with Japanese Prime Minister Shinz? Abe, a US puppet, according to Yuri Yuki. “After the Abe-Trump meeting, there’s a demand to buy more arms from the US,” she said.

She condemned the way Abe and Trump have been “propagating the DPRK threat (North Korea).”

“Abe is using the North Korea’s supposed threat as propaganda to institute change in Japan’s Constitution toward allowing the Japanese government to intensify militarization,” Yuri said.

The US maintains military bases in Japan with 30,000 personnel, Yuri said. The US also has military bases in neighboring South Korea, and currently meeting strong protests from the Koreans because it has been dredging parts of their lovely Jeju Island to build another military base. At the ILPS conference, South Korean Jang Chong Won showed mock skulls to depict the deaths resulting from US wars.

Mr. Rudy Daman of ILPS Indonesia, meanwhile, described his country to the ILPS conference as “a semi-colony of the US,” and their current president, Joko Widodo as “a spokesman of US imperialism.”

Indonesia has 17,508 resource-rich islands. It is twice as populous as the Philippines with over 200 million people. Daman said their government gave the US free ports and mining in Papua in the 1970s. For joint training and war exercises with the US, Indonesia, and the US are spending more than $700 million yearly, he said. Their country’s military budget has also been increased for next year.

Daman said their military has been using arms and their troops to force the accommodation of US policies and protect investments in Indonesia. In 2016, he said some 66 farmers were killed by these troops, more than a hundred rights violations of protesters were treated as criminal cases, and 844 were arrested.

In Africa, Demba Dembele from Senegal related to the ILPS how the US imperialism has also been assaulting their people. He said US imperialism has been in Africa for a long time now, and the US is very much involved in all parts of Africa.

“It has been there during the cold war, being always on the wrong side of history against the people and supporting reactionary fascist forces during Portuguese colonialism, apartheid regime, the fascist apartheid regime in South Africa,” Dembele said.

Over the past few years, China is rapidly piling up investments and presence in the continent, surpassing even that of the European Union. In the face of this, Dembele said, the US actions in the continent seem to be telling China to back off.

In the Middle East, US imperialism is creating chaos or conflict and using it to launch proxy wars, sell arms and gain a greater foothold in the fossil fuel-rich countries. From the Kurdistan National Congress, Erdlan Baran told the ILPS about the struggle of Kurdish people who historically live on lands now covered as territories of Turkey, Iran, Iraq and Syria.

It is mostly the fighters of the Kurdistan National Congress who have pushed back the presence of Isis in Syria, at a huge cost to their fighters. Baran told the ILPS conference that the imperialists “had not predicted that ISIS will be out of control.”


Based on the various accounts Baran gave to Filipino activists, it looked like the ISIS has only been using Islam to establish its own power. It is similar to how the Jews in Israel have also been using religion to impose its will and military might on groups of people, such as the Palestinians. Given the extreme suffering and discrimination being suffered by Muslims, there is always an opportunity for extremists to exploit the desire for justice and revenge.

While the members of Kurdistan National Congress are fighting the various cruelties of ISIS in Syria, their fighters, meanwhile, are being attacked by Turkey, a close ally of US imperialist. Baran said Turkey was spending $100 million per week to attack the Kurdistan liberation movement. In a message that resembles what recently happened in Marawi, Baran shared how the US-allied Turkish forces destroyed eight cities and displaced some 500,000 Kurds.

Unlike the Turkish government, the Kurdistan liberation movement is opposed to US imperialism and building unities with other peoples in the same situation. Baran urged the ILPS and the Filipinos to beware of the US and its allied government leaders’ speeches against “terror.”

He said the Turkish state is behind the extra-judicial killing of 17,000 Kurds and Turks supporting the Kurds’ struggle for autonomy.

In the Philippines, the Duterte administration has launched a drug war, a war against so-called terrorists in Marawi, and a war against the people dubbed as counter-insurgency, patterned and armed by the US military. According to Renato Reyes Jr., secretary general of Bagong Alyansang Makabayan, the US continues to arm institutions with a horrible reputation, for example, the Armed Forces of the Philippines. He said Duterte’s all-out war declaration against the revolutionary forces is just one of their means to terrorize the people into submission to neoliberal policies.

With these different faces of US-led or instigated wars in Asia-Pacific, Middle East, and Africa, the ILPS held workshops and made plans hoping to better coordinate and organize their struggles.


“We’re here in this international gathering because we believe we’re part of the worldwide struggle against imperialism,” ILPS Vice chair Len Cooper said.