The selling price of the new jeepneys the government wanted the operators to purchase ranged from P1.5 million to P1.6 million ($27,840 to $31.82). Under a seven-year loan package with interest, the final price would be more than P2 million each, making the government-vetted jeepney as costly as a sports utility vehicle.

In a press conference at the National Press Club, the drivers’ groups appealed for public understanding and support, saying the jeepney phaseout is not just about the drivers and small operators losing their livelihood to corporations but also the riding public losing an affordable option in transportation.

“Once the jeepneys fall under corporations, and considering the price of the new government-approved jeepneys, the minimum fare will no longer be P8 ($0.16),” said KMU Secretary General Jerome Adonis.

The selling price of the new jeepneys the government wanted the operators to purchase ranged from P1.4 million to P1.8 million ($27,840 to $31.82). Under a seven-year loan package with interest, the final price would be more than P2 million ($39,771) each, making the government-vetted jeepney as costly as a sports utility vehicle. If that is how much it costs and if the jeepneys are under corporate control, the drivers’ and workers’ groups warned that fare hikes are sure to happen.

As any fare hike would eat into the already low minimum wages, Adonis said the KMU will be supporting the transport strike. They will launch nationwide workers protest action on December 4 and 5.
“Our member unions and alliances will join the drivers and operators in their designated protest centers during the strike,” Adonis told the media.

Women’s group Gabriela will also lend their support to the striking drivers. Nora Calubaquib, Gabriela chairperson in Metro Manila, said feeding the family and budgeting for other needs will be more difficult under a corporatized jeepney system. She anticipated higher fares.

Piston and the No To Jeepney Phaseout Coalition are confident that aside from their member and allied transport associations, other drivers and operators under transport leaders who expressed support to the ‘fake modernization’ will also go on strike. George San Mateo, national president of Piston, expressed a suspicion that the leaders of Pasang Masda, Acto, 1-Utak and other similar groups often praised by LTFRB for agreeing to its phaseout program most likely personally benefited in return for declaring that support. “But their members among drivers and small operators are against the phaseout,” San Mateo said.

In next week’s strike, not just drivers of jeepney but also drivers of other public transport vehicles are set to protest, said Modesto Floranda, Piston chairman in Metro Manila.

Last October President Duterte suspended school and work during the two-day strike. It is an attempt to minimize the effect of the strike, San Mateo said. He declined to speculate on whether the Duterte administration will again suspend classes and offices. But from their end, the groups opposing phaseout are targeting “a more intense” strike participation. Their past strikes saw streets nearly emptied of public utility jeepneys; policemen bodily trying to hide from public view the presence of the strikers and supporters on the streets; and the president issuing accusations against these transport and support groups.

“This is what I will do, either you modernize next year, sell your jeeps to the junkyards. Next year, I don’t want to see any single PUJ (on the streets) because if I see one, you will be arrested. Do not resist anymore because I am telling the truth, this is the law,” Duterte has said October 17 in a speech before troops operating in Marawi City.

“President Duterte himself is violating the DOTr’s issued Omnibus Franchising Guide,” San Mateo noted. This is the order that details the jeepney phaseout and seeks to bring it under corporate control. It is also the order the transport strike hoped Duterte will scrap. This OFG will scrap the jeepney in three years, but President Duterte is threatening to scrap it all in January 2018, San Mateo pointed out.

Against the threats not just of President Duterte but also of the Department of Transportation and of the Land Transportation Franchising and Regulatory Board — from mass arrests, “guyuran” or scrappage of jeepneys, to franchise cancellation — the drivers said the strike remains their only recourse.

“LTFRB’s threat of denying our franchise is clearly meant to frighten us from joining the strike, but we will not be deterred,” said Misael Melinas, spokesperson of No to Jeepney Phaseout Coalition. “Ganun Lang din naman, mapapatay din kabuhayan namin.” (All the same, our livelihoods will be massacred.)

From Southern Tagalog, the transport group Starter- Piston president Teodoro Elevenciong condemned how, for ‘a fake modernization,’ “All government agencies are being used by the government.”

All their transport leaders have been threatened with arrest if they strike against the phaseout and corporatization of jeepneys. But similar to the drivers and operators in Metro Manila, he said the jeepney drivers in Southern Tagalog are not afraid anymore.

In Metro Manila, the LTFRB has filed a case against San Mateo at Quezon City, but San Mateo said he has not received any document concerning this. Along with the “show cause” orders that his fellow drivers received, he said the drivers will not be cowed.

“We also want modernization, but Duterte’s is fake. It will only give way to monopolies,” San Mateo explained. He belied President Duterte’s thinking that the drivers don’t want to improve their jeepney or the public transportation. He said that in fact, they have been proposing to cooperate with the government in rehabilitating the jeepney and improving the country’s mass transportation. They want any planning concerning this to be done in a democratic and transparent manner.

Adonis of KMU said there is no other just and appropriate response but a new strike and a nationwide protest against a government that seeks to function as a salesman of TNCs and big corporations. 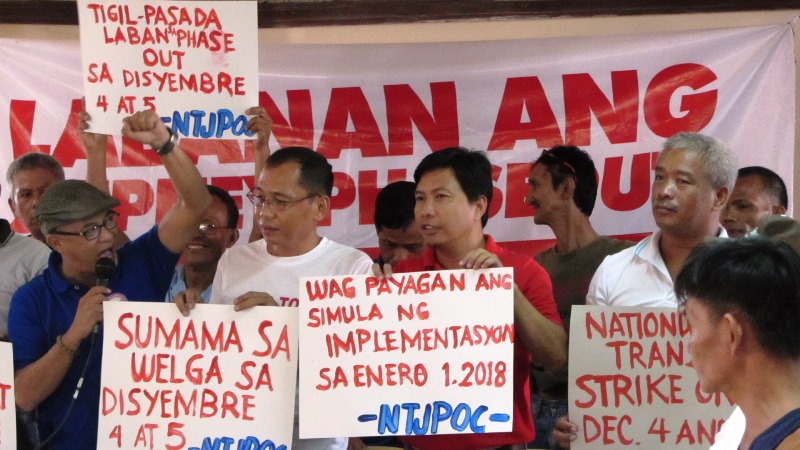 Instead of serving as a marketing strongarm for the likes of Chrysler and Toyota, and for the emerging transport monopolies as well under the likes of the Ayala’s and Pangilinans, the transport groups asked the government to junk the jeepney scrappage/phaseout program.

“We are for an omnibus franchising guide that won’t destroy livelihoods but will introduce a safe, reliable and affordable mass transport in secondary feeder routes,” said Melinas, the spokesperson of No To Jeepney Phaseout Coalition. He urged the government to allow stakeholders like them to be part of a genuinely democratic crafting of the omnibus franchising program.

Against comments that the striking drivers are forcing other drivers to join the strike, Melinas said the drivers are already willingly supportive of the strike. “Hindi na namin kailangan mangharang Dahil bukal sa loob namin ang paglahok.” (We don’t need to block the drivers on the road because they sincerely want to participate.)

Melina said it their “policy” to encourage the drivers and operators’ participation in the strike because the issues at stake concern their future.

Like in October 16-17, the protest centers in Metro Manila will include Cubao, Alabang and Monumento. The regional chapters of piston and KMU will announce other protest centers as the date of the strike nears.