MANILA — Different from past November 30 commemoration of Bonifacio Day in Metro Manila, the protesters who marched from Liwasang Bonifacio after holding a program there were prevented by policemen a block away from Mendiola (Chino Roces) Bridge. The police hit the rallyists with their shields, truncheons, and blasts of water from their firefighters. But the latter stood their ground and remained on Claro M. Recto Avenue where they eventually held the second part of their Bonifacio Day commemoration.

Marching to Mendiola typically follows a November 30 program at Liwasang Bonifacio where various progressive groups mark the birthday of Andres Bonifacio by taking inspiration from the national armed uprising he led in the final decade of 19th century. In going near Malacañang, they aim to condemn its occupants’ latest policies and actions which they say directly contradicted the principles and aspirations of Andres Bonifacio. 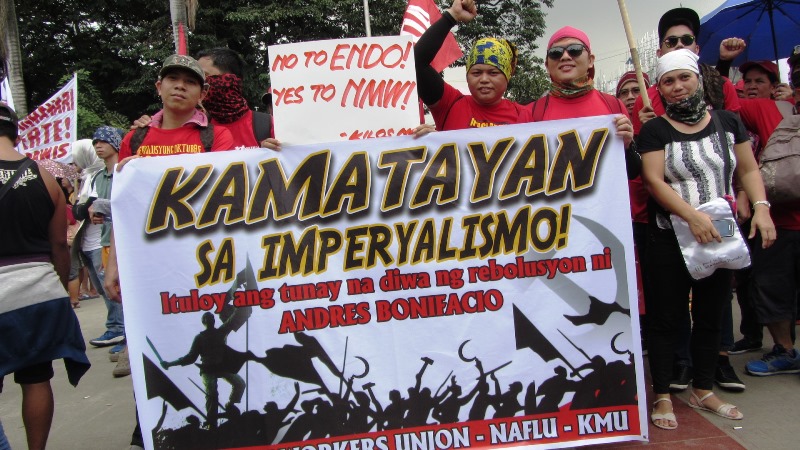 Bonifacio fought for a society that’s truly serving the people; President Duterte is seeking to serve only himself and a handful of exploiters and oppressors, Labog said.

Labog cited contractualization which President Duterte promised to put an end to when he was wooing the people’s votes. “Contractualization was institutionalized rather than ended, he said. He added that Duterte also has not acted on the housing problem — it was Kadamay who took action. And there also remains no new law on land reform. Other trade unionists denounced the new burdens being imposed by the Duterte government on the people. Lito Fadriquelan of Ilaw-Buklod ng Manggagawa (IBM-KMU) criticized the Duterte government’s efforts to impose additional taxes.

“Even the simple problem of traffic this government has not yet solved,” Labog said during the program at Liwasang Bonifacio.

Far from being a revolutionary, Duterte is all for “patay, patay, patay,” (kill, kill, kill) said Bayan secretary-general Renato Reyes Jr. He said Duterte has five more agreed locations with the US for military bases in the Philippines. “Duterte is launching an all-out war.” 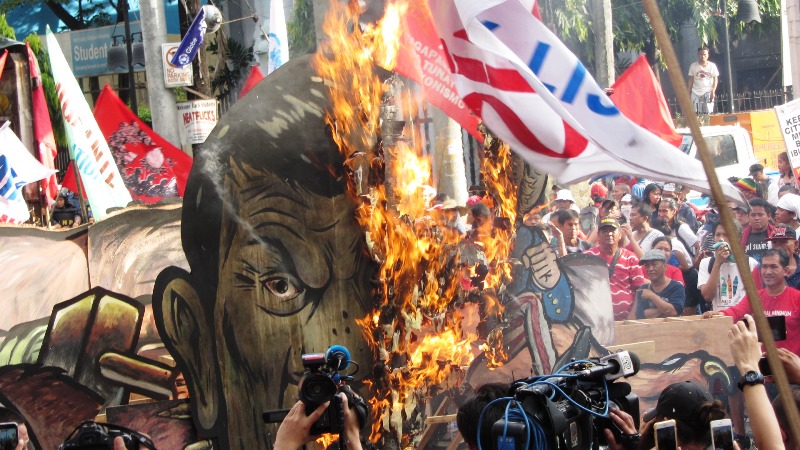 Rather than gaining peace and prosperity, the people under Duterte are suffering and set to suffer further due to his adoption of tested as flawed policies of neoliberalization. “Despite his all-out war, despite his threats of a crackdown, Duterte himself is pushing the people to fight back,” said Jerome Succor Aba, president of Suara Bangsamoro.

Often unreported, many communities continue to be bombed as we speak to give way to large-scale mining activities, said Joms Salvador. With this ongoing injustice, “Can we blame our compatriot if they take up arms?”.