“For us, they might not be the murderers of our children, spouses, or kin, but they represent the thousands of killings that have not reached as far as putting the perpetrators to jail.”

MANILA – As Dr. Gerry Ortega’s death anniversary approaches, a suspected mastermind in his assassination was freed by the Court of Appeals. The court decision drew outrage from rights advocates, journalists and environmentalists.

A wildlife veterinarian, environmentalist, and broadcaster in Palawan, Ortega was killed on January 24, 2011 as he was coming out of his just-concluded radio broadcast. His family and supporters have since done their best to bring his killers to justice, with the result, so far, that some of the direct assailants were arrested and evidences and testimonies were gathered pointing to the Reyes brothers as suspected masterminds in the killing.

Ortega’s death was suspected to have been planned by former Palawan Governor Joel Reyes and his brother ex-Coron Mayor Mario Reyes. Their suspected motive was their desire to silence Ortega’s broadcasting about the corruption in the Provincial government of Palawan on the Malampaya funds and his opposition to mining projects which were reportedly supported by the suspects.

The Reyeses successfully evaded arrest for much of the time under the Aquino administration. They went out of the country under false names, an escape which the Kalikasan PNE blamed on the Aquino government’s inaction on the case. In 2015 the Reyes brothers were finally “captured” or arrested.

The environmentalists lauded the arrest. But at the same time, the Kalikasan PNE noted that the timing of the “arrest”– just a few months before the national elections – also meant that there was only a slim chance for the two to be swiftly tried and sentenced. On top of the pending technical questions in the courts that have stalled the prosecution of the two, the then Justice Secretary Leila de Lima was about to resign when the two were brought to jail.

Indeed, just a year later, Mario Reyes was released on bail ahead of his brother Joel who followed this January 5. The two were in jail for just a year and less than three months.

Yesterday the Kalikasan PNE expressed their “utmost disgust” over the Court of Appeals’ release of former Palawan governor Joel Reyes. “The CA’s questionable decision sets the tone for more emboldened killings of environmental defenders and the unfettered expansion of destructive projects throughout 2018,” said Leon Dulce, deputy national coordinator of Kalikasan PNE.
Despite the numerous technical setbacks thrown in the way of the Ortega family as they try to bring Dr. Gerry’s killers to jail, Dulce said that when compared to other cases of killings of environment defenders, Ortega’s case has made the most progress. That is, up to the point where the CA exonerated Reyes.

The group has monitored at least 158 cases of environment-related killings since 2001. A year ago, while lighting candles for Dr. Gerry, their monitoring registered 108. Under the Duterte administration, they said 60 people defending the environment have been killed. 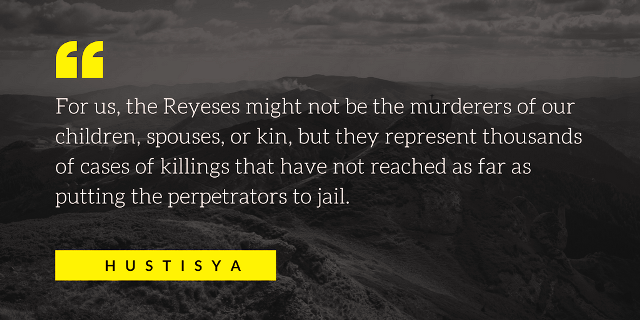 Of the 158 killed environment defenders, Kalikasan said 16 died while protecting Palawan and its “the last ecological frontier’s unparalleled old growth forests and other natural wonders from big mines and other destructive projects.

The fisherfolk group Pambansang Lakas ng Kilusang Mamamalakaya ng Pilipinas (PAMALAKAYA) warned in another statement that “The release of Palawan ex-governor Joel Reyes is a clear go signal for murderers and perpetrators to continue persecuting environmental defenders and critics who expose government anomalies.”

News reports quoted Reyes’ lawyers as saying the appellate court has prohibited the Palawan Regional Trial Court Branch 52 from proceeding with the case against the former governor. Still, the National Union of Journalists of the Philippines (NUJP) notes that “avenues remain for Doc Gerry’s family, friends and colleagues to seek to right this grievous wrong.” The journalists’ group vowed to continue standing with them and supporting their continued struggle for justice and free expression.

Meanwhile, the human rights group Hustisya said in another statement that it is gearing for actions to continue demanding justice for Ortega and other victims of extrajudicial killings under previous regimes and under Duterte.

Evangeline Hernandez, chairperson of human rights group Hustisya, called for public support in fighting impunity. Citing the acquittal of Maj. Harry Baliaga, accused in the abduction of Jonas Burgos, and now Reyes, Hernandez appealed to the public to bolster their calls for justice. “We attain justice in not letting the perpetrators escape accountability and public clamor to make them pay for their crimes,” she said.

Hernandez is appalled by the CA decision releasing Reyes also because of its dire implications to the other families seeking justice for their loves ones who were also killed. “For us, they might not be the murderers of our children, spouses, or kin, but they represent the thousands of killings that have not reached as far as putting the perpetrators to jail. If such a case as Ortega’s or Burgos’ cannot attain justice, what more the poor Filipinos who fall victim to killings, to abductions, and other violations?” explained Hernandez.