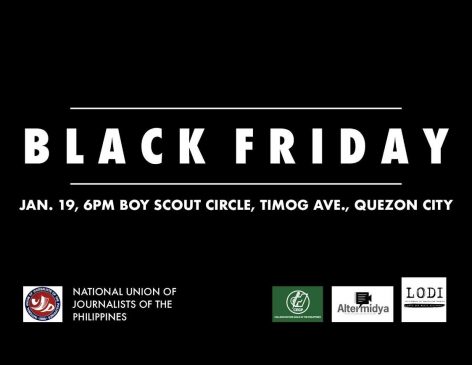 MANILA — Journalists and press freedom advocates are calling on all citizens to join the #BlackFriday protests amid the intensifying attacks on press freedom and plans to dilute the progressive provisions in the 1987 Philippine Constitution.

The media and artists alliance, Let’s Organize for Democracy and Integrity (LODI), the National Union of Journalists of the Philippines, Altermidya network and the College Editors Guild of the Philippines (CEGP) will be holding a protest action tomorrow, 6 p.m. at the Boy Scouts Circle in Quezon City, against “the Duterte administration’s crackdown on media and its planned charter change that attacks citizens’ political, social and economic rights.”

In Bacolod City, members of the NUJP local chapter will hold a program at the Fountain of Justice, 6 p.m.

At least 54 radio stations are also in danger of being shut down as the application for the renewal of ranchise of the Catholic Media Network (CMN) remains pending at the committee level of the House of Representatives.

In the past, Duterte also threatened to block the renewal of ABS-CBN’s franchise, which expires in 2020. He also castigated the Philippine Daily Inquirer for issuing editorials critical of his administration.

The alternative media outfits and the community press have also been targeted. A columnist of Northern Dispatch, Sherwin de Vera, was arrested Dec. 12, 2017 and detained on rebellion charges. Another community journalist based in Davao City, Kathyrine Cortez, received death threats last December. Bulatlat was also labeled by Manila Times columnist, and former press secretary of the Arroyo administration, Rigoberto Tiglao as being run by “Communist party propaganda cadres.” Student publications under the banner of CEGP have also decried harassment and red baiting.

Moreover, allies of Duterte in the House of Representatives have been pushing for charter change amendments that would limit the exercise of inalienable rights. The proposed amendment inserts the phrase “responsible exercise of” to Article 3, Section 4, making the freedom of speech, expression, and of the press conditional on what the government would determine as “responsible exercise.”

In a statement, LODI said, “The Duterte regime aims to silence the press and clamp down of citizens’ right to free expression as prelude for an indefinite period of one-man rule. That is what the whole governance pivot aims for.”