A non-government organization, the Tarabang para sa Bikol, Inc. (TABI), noted that evacuees complain of inadequate food supply. During the first week of evacuation, each family received only ten kilos of rice.

MANILA — More than 55,000 people are taking shelter in 59 evacuation camps in Albay, Bicol since Jan. 15 after the Philippine Institute of Volcanology and Seismology (PHIVOLCS) warned against Mayon Volcano’s eruption.

On Jan. 22, PHIVOLCS raised the alert level to four, which means that hazardous eruption is imminent. Lava fountains measured as high as 200 meters. On Jan. 23, two explosions were recorded. The country’s most active volcano has been emitting an average of 992 tons of ash per day for the past week.

Classes were suspended in 17 cities and municipalities in the provinces of Albay and Camarines Sur. A total of 11 international flights and 45 domestic flights were cancelled since Jan. 23, according to the National Risk Reduction and Management Council (NDRRMC)’s latest update.

A non-government organization, the Tarabang para sa Bikol, Inc. (TABI), noted that evacuees complain of inadequate food supply. During the first week of evacuation, each family received only ten kilos of rice.

In its rapid assessment, TABI observed overcrowding in evacuation centers, with 20 to 30 families cramped in one regular sized classroom.

The NGO noted that while most evacuation centers have enough drinking water supply, domestic water supply is limited and those with small water containers are not able to store enough water. 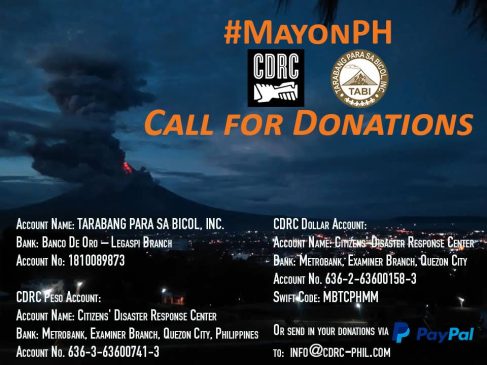 Moreover, some evacuation centers are not safe from ash fall. According to the local Department of Health (DOH), 65 percent of their patients in the affected areas suffered from acute respiratory infection.

Evacuees have no source of income to address non-food needs like transportation, educational needs of students, and household supplies, TABI said.

In the past, evacuees stay in evacuation centers from two weeks up to four months.

Mayon had 51 eruptions in the past four centuries.