As of December 2017, Karapatan has already documented 126 cases of extrajudicial killings in the whole country — at least half of which committed in the Southern Mindanao Region (SMR).

To launch a general information campaign about the effects of martial law on indigenous peoples and peasant communities in Mindanao, the International Coalition on Human Rights in the Philippines (ICHRP), Ecumenical Voice for Peace and Human Rights in the Philippines (EcuVoice), Karapatan Alliance for the Advancement of Human Rights (Karapatan), Sandugo, and Mindanaoans for Civil Liberties (MCL) hosted a forum on the real impact of martial law in Mindanao on February 26.

“Consistent with the militarist and fascist tradition of state security forces who came up with the cruel and inhuman wheel of torture, Duterte cooks up his own upgraded and vicious version – the wheel of terror. State terrorism has become more rampant, more apparent as martial law ravages Mindanao. With Duterte’s counterinsurgency program compounded by military rule, the wheel of terror has been set in motion, fully implemented by the state’s entire machinery,“ said Karapatan Deputy Secretary General Roneo Clamor said in a statement. 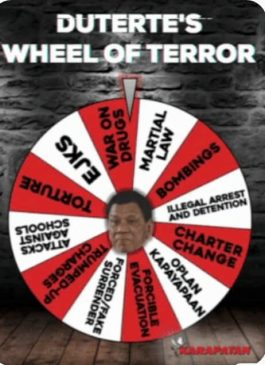 As of December 2017, Karapatan has already documented 126 cases of extrajudicial killings in the whole country — at least half of which committed in the Southern Mindanao Region (SMR). Trumped-up charges, militarization of areas leading to forced evacuations, and cases of torture are also prevalent in Mindanao.

“What is evident is that the state and its machinery remain as the number one violators of people’s rights, deliberately defying national laws and agreements, and international human rights instruments that aim to protect and promote human rights. Like the wheel of terror, the violations come in different forms, but it is every bit as destructive, as brutal, and as negligent of the people’s welfare,” Clamor commented.

Norma Dollaga of EcuVoice and the Rise Up for Life and for Rights (Rise Up) called to render the Duterte regime accountable for all its transgressions against people’s rights.

“Duterte and his government will hear resounding protests – in waves that that will gradually resonate in the comfortable and guarded ivory towers of this government and all its institutions. This will be led by the victims who this regime has incessantly tried to silence. The wheel of terror will be put to rest by the deafening call of the people to make the perpetrators, foremost Duterte himself, accountable,” concluded Dollaga.