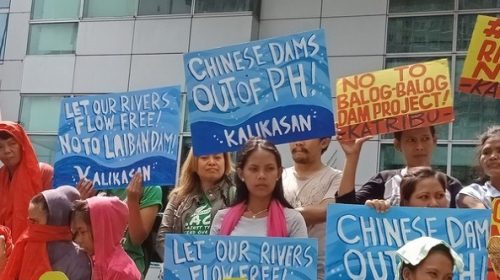 The dam projects will flood communities, drive away residents and redirect the river’s water away from farming communities.

MANILA – Last month it was Benham Rise and the West Philippine Sea; this time it is some key river systems.

Environmentalists and indigenous peoples composed of the Ayta and the Dumagat marked the International Day of Action for Rivers this March 14 with a colorful picket in front of the Chinese Embassy. The Aytas, the Dumagats and farmers in Central and Southern Luzon have been campaigning to save the rivers and their communities from dam projects. Their protests have stalled the projects. But here comes the Duterte government and with Chinese funding, they are reviving and fast-tracking mega-dam building projects.

In Central and Southern Luzon today, the Chinese have stakes in the Philippine government’s construction of Balog-Balog and Kaliwa-Kanan dams. The Duterte administration is hastening the building of these dams and other infrastructure projects, some of which have been planned by previous administrations and stalled by peoples’ protests, Kalikasan-PNE said. Aside from Kaliwa and Balug-Balog, other dam projects being fast-tracked include the Alimit Dam and Jalaur Dam.

The dam projects will flood communities, drive away residents and redirect the river’s water away from farming communities. In return, the projects are touted to generate electricity, irrigation and water supply.
But to the Philippine Task Force for Indigenous Peoples’ Rights (TFIP), these “purported” benefits are not worth the invaluable lands, lives, livelihoods, and cultures that will be lost. Their experiences showed the dams had not helped the farmers. On the contrary, it brought disasters, and costly electricity and water. It also deprived them of their land, their water source, and their livelihood.

Kaliwa-Kanan is the same Laiban Dam project that has been stalled for years by the opposition of the Dumagat and Remontados in Rizal and Quezon.

Late last year, Arnel Delos Santos of Balatik told Bulatlat that more than 10,000 families of farmers and indigenous Dumagats and Remontados will be driven away, their communities in seven villages of Tanay and two villages of Gen. Nakar in Quezon would be submerged, if the dam of many names (Laiban, Kaliwa, Kanan) pushes through.

The massive dam project will straddle an estimated 20,000 hectares of indigenous peoples’ land, Delos Santos said. Not only that, he said, the people living downriver between Laiban and Gen. Nakar, and these include Infanta and Real Quezon, will also be affected.

In the Balog-Balog dam project in Central Luzon, some 29 sitios (sub-villages) covering at least 1,650 families mainly of indigenous Aeta will be wiped out. Another 14 sitios or around 700 families will face heightened flood risks as a result, Kalikasan PNE warned.

Because of the dam projects, some indigenous communities are already losing their water resources.

Meanwhile, the New Centennial Water Source Project, also known as the Kaliwa-Kanan or Laiban Dam, is said to already have a committed P10.9 billion fund from the Chinese government’s Official Development Assistance (ODA) to be coursed through Duterte’s Build-Build-Build program.

In defense of rivers

For decades, groups of peoples worldwide, much like the Philippines’ Aytas, Dumagats, Remontados and those from the Cordillera and Iloilo, have resisted what they call as the government’s “obsession” with dam-building.
“On this day, March 14, we celebrate the struggles of peoples around the world fighting against large dams,” Jill Carino, Executive Director and Convenor of Task Force for Indigenous Peoples’ Rights (TFIP), said.

Demanding to stop the construction of these gigantic structures, they cited the dismal experience of indigenous peoples with the construction and operation of the Ambuklao, Binga, Pulangi IV, Pantabangan, Casecnan and San Roque dams.

These teach us lessons not worth replicating in other communities, Cariño said.

She cited the actual and expected displacement, flooding, soil erosion, siltation of rivers and loss of biodiversity as enough reasons to stop the building of these mega-dams. Up to now, for example, the Ibaloi and Bugkalot tribes displaced by Binga dam had not been compensated for their losses. In Umiray, Quezon, Quierrez, a Dumagat leader, told Bulatlat how, when Sumag dam was being built, the indigenous peoples were promised that “everything will be done for them.”

They were promised education, scholarships, health center. “But after the dam, we lost the water and there was still no school,” Quierrez said. Sumag River’s water in Umiray, Gen. Nakar, Quezon is being diverted to augment water in Angat Dam.

For the indigenous people, another concern with mega dam-building is the direct violation of their right to self-determination. Cariño said much of the dam projects are being implemented by the Duterte government without genuine free, prior and informed consent (FPIC) of the affected indigenous communities located upstream and downstream of the dams.

Over the years, the struggle to save the rivers from massive dam projects have delayed and even stopped such projects. It had also resulted in the killings of community leaders.

Mayumi was vocal against the hydropower project of Sta. Clara Power Corp. He was killed in his house in Ambabag, Kiangan Ifugao on the evening of March 2.

“Our continued opposition is an assurance that the sacrifice of their lives will not go to waste,” Cariño said.
“Big dams are proven not only as major land grabbers but also ecological disruptors,” Dulce of Kalikasan PNE said. Adding to reasons why the dams have to be opposed, he explained that it will reduce the fish catch in these rivers, create dangerous microclimates upstream and downstream, and aggravate flooding. “These dams are also situated near geo-hazards, and no sufficient scientific evidence have been presented to the public to prove that these projects are safe,” Dulce said.

The rallyists appealed for greater support in stopping the construction of large dams. Cariño proposed the building of renewable energy systems instead, saing these are small-scale, community-based, community-initiated, environment-friendly and culturally appropriate.