MANILA – Women from Vitas, Tondo trooped to the House of Representatives when Gabriela Women’s Party Reps. Alrene Brosas and Emmi de Jesus filed a resolution seeking to address their housing woes. Carrying handwritten placards and their children, too, the women asserted their right to shelter. Most are supporting themselves and their families on odd jobs linked to the budget shopping haven that is Divisoria.

Lynette Loyola, 60, said many of them work as mangangalakal (small trader) or tambakero (attending to junk). As their jobs spring from what the area offers, they’d rather stay living there, she said, than in the proposed relocation site where their chance of getting a job is very slim. They all currently live in a dilapidated “temporary” relocation housing in Vitas, where they were herded to after their former dwellings in Smokey Mountain or in other informal settlements in the city were demolished years ago.

“I hope the government will just help us in fixing the buildings,” 69-year old Celia Sejane, a laundry woman, told Bulatlat. She is referring to the cluster of two-storey housing units that were constructed in the 1990s as “temporary” relocation for evicted families. Since then, the housing units had been neglected but the families living there did not get the promised in-city resettlement. Most relocation sites are in far-flung areas outside of Manila, far from their sources of livelihood, the women told Bulatlat. 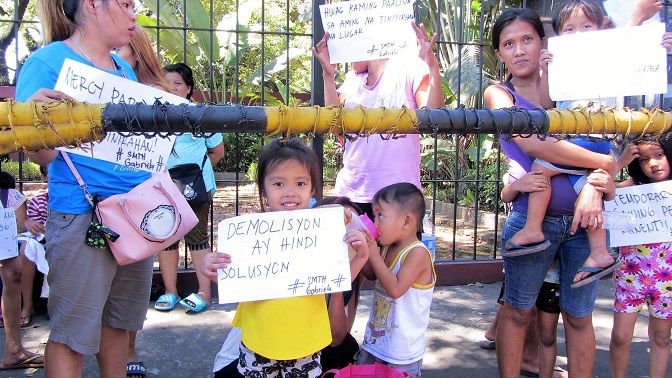 On these women’s behalf, the Gabriela representatives are seeking a review of the implementation of Executive Order 1086, which was issued on the final days of the Marcos regime and is now being used by the National Housing Authority (NHA) to evict over 6,000 poor households from Tondo.

Gabriela also seeks the suspension of the EO 1086 pending the review of its implementation.

Gabriela’s Proposals for the urban poor threatened by Marcos EO

Gabriela Women Reps. Arlene Brosas and Emmi de Jesus filed their resolution early this month directing the House of Representatives committee on housing and urban development to review the implementation of EO 1986, recommend measures to secure the shelter and livelihood of around 6,000 poor households in Vitas, Tondo, Manila who are under threat of displacement, and recommend to the National Housing Authority to suspend the implementation of the said executive order pending the review.

The said Marcos EO is entitled “Fixing the Boundaries of the Reclamation Area of the Vitas in the Tondo Foreshore and Transfering to the National Housing Authority the Title and the Administration of the said Area.”

The Tondo Foreshore area gained international recognition as a model for Nationwide Slum Improvement and Resettlement Program decades ago, the Gabriela Women representatives said. Vitas reclamation area is part of the Tondo Foreshore Development Project that EO 1086 authorized the NHA to oversee the “development” into a port-oriented commercial/industrial area. That path of development, meanwhile, is a conditionality in the loan agreement entered by the Marcos government with the World Bank.

Marcos issued the EO with the justification that since the project beneficiaries are experiencing economic hardship, “there is a need to make certain adjustments in prices and amortization payment being paid thereby emphasizing the need to generate more revenue for cross-subsidy purposes.”

Under the EO, Vitas reclamation was designed to be sold or leased to investors as a major source of revenue to subsidize the Tondo Foreshore Development Project. The EO transferred to the NHA an area of 440,268 square meters, which included the 11-hectare Smokey Mountain Temporary Housing Project in Vitas and the Reclamation Industrial Area along Radial Road-10 North Harbor, which is a part of Barangay 105, Vitas, Tondo.

Most of the women who rallied with Gabriela Representatives on March 5 live in the “Temporary Housing Project” called Aroma, Helping complex and some in Road-10. They held the picket to remind the government of the continuing necessity of an in-city relocation, which is supposed to be what’s being built as their permanent housing instead of the “temporary” housing or “staging area” where they were brought to live in after they were removed from various slums such as the Smokey Mountain. In trooping to Congress and demanding a review of Marcos’ EO 1086, the women are asserting thee original promised in-city relocation.