“The local government is claiming our land but our elders know the land where they and the elders before them had lived. We put up this barricade in front of the marker delineating our CADT (Certificate of Ancestral Domain Title).

Porac, PAMPANGA – After eight years of intense quarrying in Ayta ancestral lands in the village of Camachiles in this town, the Aytas have had enough of being ignored by the government and the quarrying companies. Their ancestral land is being gobbled up by various land conversions and now even their settlement in Sitio Pidpid is at risk. Surrounded as it is now by quarrying operations, they are losing their access to water sources and even to nearby parts of their land.

Last January 30 they started a barricade against the quarrying activities of four companies. These include the quarrying operations of a local political family of the Clarete’s, which the Aytas said began the quarrying frenzy in 2010. The Claretes were soon followed by T.A.G. Mineral Resources Incorporated and the most recent, the Powerzun Quarrying and Trading Inc. and Sandglo Inc. The latter has recently built a bigger site of operation higher up the hills closer to the settlements of the Aytas. It has electricity and bigger equipment for faster processing of sand and gravel.

The Aytas’ barricade has been up the whole month of February and it’s ongoing as of this writing. By now, they have built a checkpoint near a marker on a hill in Camachiles, the boundary of their ancestral domain. With their families taking shifts to guard the barricade, they are blocking the trucks of quarrying companies from further bringing out of their lands their haul of gravel, sand and stones. 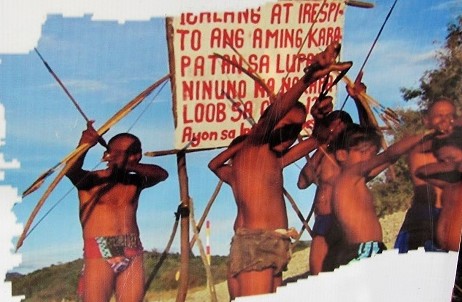 On the first day of the barricade, some of the elders brought out their indigenous weapons such as bows and arrows. At one point, they jumped on board a stalled truck and manually unloaded piece by piece the rocks it had come to bring out of the village.

By second half of February, the Provincial Government Environment and Natural Resources Office (PGenro) chief Engr. Art Punsalan was reported as saying that there is a shortage of supply of sand and some quarry materials in the province. He didn’t mention the Ayta barricade. Instead, he blamed the lack of sand on “natural compaction of the province’s upstream portion.” Punsalan reportedly suggested that immediate measures and interventions would have to be put in place to strictly regulate quarrying operations. This is to ensure they will have the finest quality sand for the Pampanga Megalopolis Plan and the Clark Green City.

Meanwhile, the Ayta barricade is being “visited” daily by policemen and representatives of the local government asking them to dismantle the barricade.

Pampanga’s quarry collection in January this year, before the Aytas began their barricade, was reported to be P31.42 million, higher than the P31.36 million collected in the same period last year. In 2017, quarry revenues were recorded at P375 million. Since July 2010 (corresponding to the time the Clarete family bagan quarrying in Aytas’ Camachiles) to December 2017, the province of Pampanga’s total quarry income is more than P2.354 billion.

The Aytas we interviewed, however, said they remain poor. They have received no share at all in any earnings from the province’s “white gold.” They don’t even have a public school near their community which some of them recalled as promised to them.

Before their barricade, they said, one of these companies were taking out as much as 120 truckloads of sand and gravel everyday.

The result of eight years of quarrying shows in the cratered sandy hills surrounding their settlement. The quarrying activities have leveled down these hills. If this continues unabated, their settlement atop the next hill will soon be surrounded by quarrying. The hill still stands today but with quarrying at its base it is a question how much longer it will remain standing.

Missing the animals and clean water

Ramon Sibal, 72, told Bulatlat that before the quarrying, their soil up the hill was wet, enabling them to plant crops such as papaya, sweet potatoes, watermelon, taro and other root crops. With the water drying up, with the river redirected away from their settlement, the ground is turning into harder packed earth and unproductive for planting. The tribe has also less water to drink now.

Worse, they found themselves fenced off from a part of their own ancestral land nearby, where Sandglo Inc. had built a processing site.

From Sitio Pidpid, the sight of the excavated ground and the mounds of sifted sand awaiting hauling in the near horizon readily assault the eyes. The resulting lack in water and difficulty with their old crops, and the inaction they met from government agencies they had approached with their Certificate of Ancestral Domain Title, galvanized the community to put up the barricades.

Life in the barricade

At the start, the Aytas’ barricade consisted of just a few makeshift tents. To accommodate the families of Aytas that guard the barricade in shifts, they added huts with dried cogon for roof. It provides them shelter from piercing heat, but not much protection when it rains. Their barricade has evolved into a conference room of the Aytas and a pavilion of sort when they welcome different groups of supporters arriving for solidarity visits, exchanging stories and calls, and bringing some support such as medicines, tarpaulin and food for sharing.

After a month of forced stoppage of quarrying, the Aytas happily noted that some of the river water has started flowing again.

But in the barricade, they said, the water is no longer as clean as before there was quarrying. The children who came with their parents to stay in the barricade reported suffering from diarrhea. On separate occasions in the past month, the Aytas had rushed ten (10) children to the hospital. 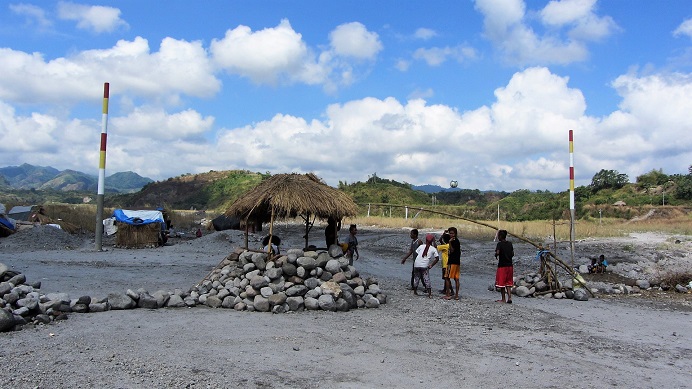 “Even we, elders, feel gas pains from the water. It no longer tastes as sweet but has traces of oil, probably from the backhoe,” an elderly Ayta told Bulatlat.

It’s not only the clean water that has retreated away from the Ayta settlements. Some elderly Aytas also rued how, since the quarrying, they have missed the birds, monitor lizards, civet cats, among other animals that have disappeared in what’s left of the greenery.

Before the Aytas themselves are forced to leave their ancestral land for lack of water or livelihood due to damaged agricultural land, they are seeking compensation, and to have their say in the comings and goings into their land. They also seek the government’s help in regulating the quarrying and stopping the land conversion that shrinks their territory. Their CADT says it covers 18,659.73 hectares. At present, after what the peasant group AMGL calls as landgrab of the Ayalas (Hacienda Dolores), Clark Development Corporation (New Clark City), the DENR (National Greening Program), and then these quarrying operations, the Aytas have less than 600 hectares now.

Julio Serrano, spokesperson of the Sitio Pidpid Brigada, said that if the quarrying activities were allowed to go on to feed the construction of the New Clark City, it’s not only the indigenous peoples living on the mountain who will be affected but also those living downstream.

“The local government is claiming our land but our elders know the land where they and the elders before them had lived. We put up this barricade in front of the marker delineating our CADT (Certificate of Ancestral Domain Title).”

Less than a half-hour of bumpy ride up to their Sitio Pidpid, where the barricade and the quarrying-cratered foothills could be seen when one looks down the hill, one of the oldest Ayta women alive told us how they have lived in these parts for as long as she and her parents before her could remember.

They have yet to welcome back other fellow Aytas who evacuated because of the eruption of Pinatubo. She recalled how there was still a thicker forest behind her when the World War 2 broke out and they ran to the forest to hide from the Japanese  troops.

The Ayta elders explained that the name of their sitio — Sitio Pidpid — built by the Aytas who returned from various settlements after the Pinatubo eruption, means, in their language, as a place where the things the river failed to carry away are left lying around.

Now the Aytas liken themselves also to Pidpid. With their collective decision to erect and maintain a barricade in defense of their land and water, they declared they will not let themselves be forced into a situation when they will have to be carted off and dumped somewhere else far from their ancestral land.