Women workers on the picket frontline: Why workers of NutriAsia go on strike 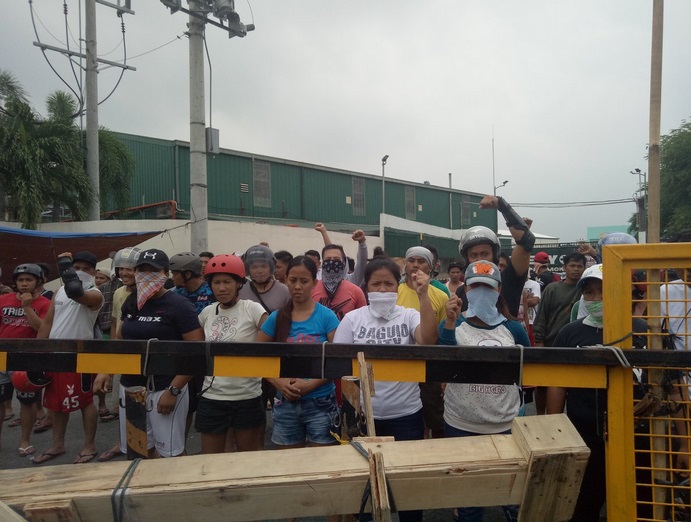 To them, it is no longer just about wages –- it is a bigger fight they need to win to regain their dignity as workers after their rights have been trampled upon for so long.

MARILAO, Bulacan —When the workers’ strike began at the local food condiment giant NutriAsia in Marilao, Bulacan, Marissa trembled in fear. It is the first strike to hit the industrial area in nearly 13 years. The last was in 2005. The police immediately stationed themselves near the picket line, disregarding the policy that they should not loiter within 50 meters of the workers’ picket. Some were openly carrying long firearms.

Tensions rise and wane at the picket line as uniformed armed men try to intimidate and provoke the protesters. Between both sides the air feels heavy with unrest.

But as Marissa recited a poem she wrote at the cultural night held in the picket area six days into the strike, her voice was no longer shaking. Instead, she read every word with conviction and purpose.

Marissa Momo, 31, had worked for NutriAsia for nine years before she was dismissed September 2017 with everyone in her “line.” They were the first batch of workers terminated by the company without prior notice.

“They told us they had acquired new machines and they needed to cut the number of workers,” Marissa said.

Because of her experience, it was not hard for Marissa to decide whether or not she would support the strike. Though she now works in a different job, she came to support fellow women workers whose rage was fueled by years of unfair treatment at work.

Jerose Gabonada, 34, used to go to work at 6 a.m. to attend a “toolbox meeting” where they were assigned tasks. Members of her line, however, often get distributed to other lines, forcing them to do jobs they were not accustomed to.

“We’ve been assigned to tasks usually done by men such as “palletizing” and packaging and lifting heavy boxes,” Jerose recalled.

“You can’t say no because they would get your time card and then the office will call you in and make you explain,” said Christine Emeterio, 40. She has worked in NutriAsia for four years.

Aside from being forced to work multiple tasks in one day without compensation for the additional work they did, they also experienced having to do the job of two people at the same time.

Sometimes they were forced to match the speed of the machine running alongside that of an absent or unavailable worker. When a line did not have the expected number of workers normally running it, the workers on the job are required to make up for the absent worker, forcing him or her to move faster to produce the regular quota.

‘You are free to go. You can resign. The doors are open.’ This is what the management would tell them when they question its policies, said Christine.

The company is keen to maintain its “zero-accident” record. But in truth the workers get injured on the job. They risk getting fired if the management got wind of it. The company would deny that it habitually removes the injured workers. But they would reassign these workers to a factory inconveniently far from their home, leaving the workers little choice but to resign.

And so, to keep their job, the workers just keep the work-related injuries to themselves. Christine said the standard has become like this: “If you’re hurt, keep it to yourself. If you’re wounded, endure the pain.”

Some of the most common accidents were burns, scalds, falls, and machine-related injuries. Recently, an individual fell while carrying with a coworker a drum of sizzling Mang Tomas. The injured person is now an active member of the union on strike.

NutriAsia workers are paid a meager P380 ($7.13) for eight hours of work with an additional P59.75 ($1.12) per hour of overtime. Out of the 1,500 workers in NutriAsia, only 100 are regularized. The rest have to deal with lack of job security and benefits and even discrimination at the workplace.

Christine and Jerose are employed by NutriAsia under B-Mirk Enterprise Inc., a third-party toll packer company that provides services to other local and multinational firms.

Like many of their coworkers, Christine and Jerose have been urged to take part in various schemes set up by the company banking on their hopes of earning extra money. But it has turned out differently from what they hoped it was.

The two of them used to invest in what they call Besla. From Christine’s description, it’s a fund from workers’ savings handled by the company. The workers can borrow from the fund after a year and derive from it their “separation pay” in case they decide to resign. The company would deduct from their pay the amount the worker elected to save. The company also deducted a monthly interest. When an employee decides to borrow a certain amount from his or her Besla share, the company earns that interest.

“In short, they are already profiting from our work. And when we borrow from our own funds, they profit from us again.”

After the Department of Labor and Employment interfered, the workers’ money was returned. But the company has not paid them the rest of their Service Incentive Leave (SIL). They received it only once. The company also continues its hold on their share in the cooperative.

Christine and her husband’s combined bimonthly income amounts to P11,000 ($206.50). She has long found out that it is not enough to sustain the needs of her family. She’s sending three of her children to a public school.
“We cannot even afford a box of cooking oil with our daily wage, yet we produce so much more than that in 12 hours of working,” Christine said.

Jerose, on the other hand, manages a backyard piggery to make up for their insufficient income. Her husband, a tricycle driver, has to stay at home to take care of their two-year-old daughter until she finishes her shift at NutriAsia. With this setup, they strive to maximize their options to earn extra for their family of four.

Christine dared the National Economic Development Authority (NEDA) officials who came up with the hypothetical P10,000 ($187.72) budget for a family of five to try this amount themselves. A NEDA undersecretary put forward an estimate of P10,000 which can supposedly already be enough for a family of five. Amid public uproar, the NEDA has since then tried to backtrack, saying P10,000 ($187.72) is just “hypothetical.”

Because of the unjust treatment of workers in NutriAsia, workers have learned to rely on one another.

From 2016 to 2017, the company was coercing its employees to work 16-20 hours straight. Those who reported at 6 a.m. can only go home at 2 p.m. the next day. They were allowed to go out, but their time card would be withheld.
This practice was only halted after two incidents of bangungot (dying in their sleep). The workers who went to sleep after such a long workhours did not wake up and died, Christine and Jerose recounted.

Aside from the issue with their time cards, the two women said they opted to stay to avoid passing the burden to co-employees who would assume their workload. “It’s also consideration for your fellow workers.”

When Marissa got fired last year and found herself studying the labor code and workers’ rights, it was also her co-employees she first thought of.

“When we got terminated, we also thought of our colleagues still working in that condition because they didn’t know their rights were being violated.”


The oppression of NutriAsia workers is what brought them together at the picket line. Arm in arm, they stand unfazed by the constant threat of police stationed nearby. Women has taken positions at the frontline. Like in their job at the factory, they struggle now for their rights collectively, standing with the same power and calls as their male counterparts.

More than a week has passed but Marissa, Jerose, and Christine, along with other NutriAsia workers, remain at the picket line. To them, it is no longer just about wages –- it is a bigger fight they need to win to regain their dignity as workers after their rights have been trampled upon for so long.

“We were afraid of them before, we just obeyed whatever they say. But when we learned we have rights, we feel brave and hopeful that something will change if you struggle for it.”