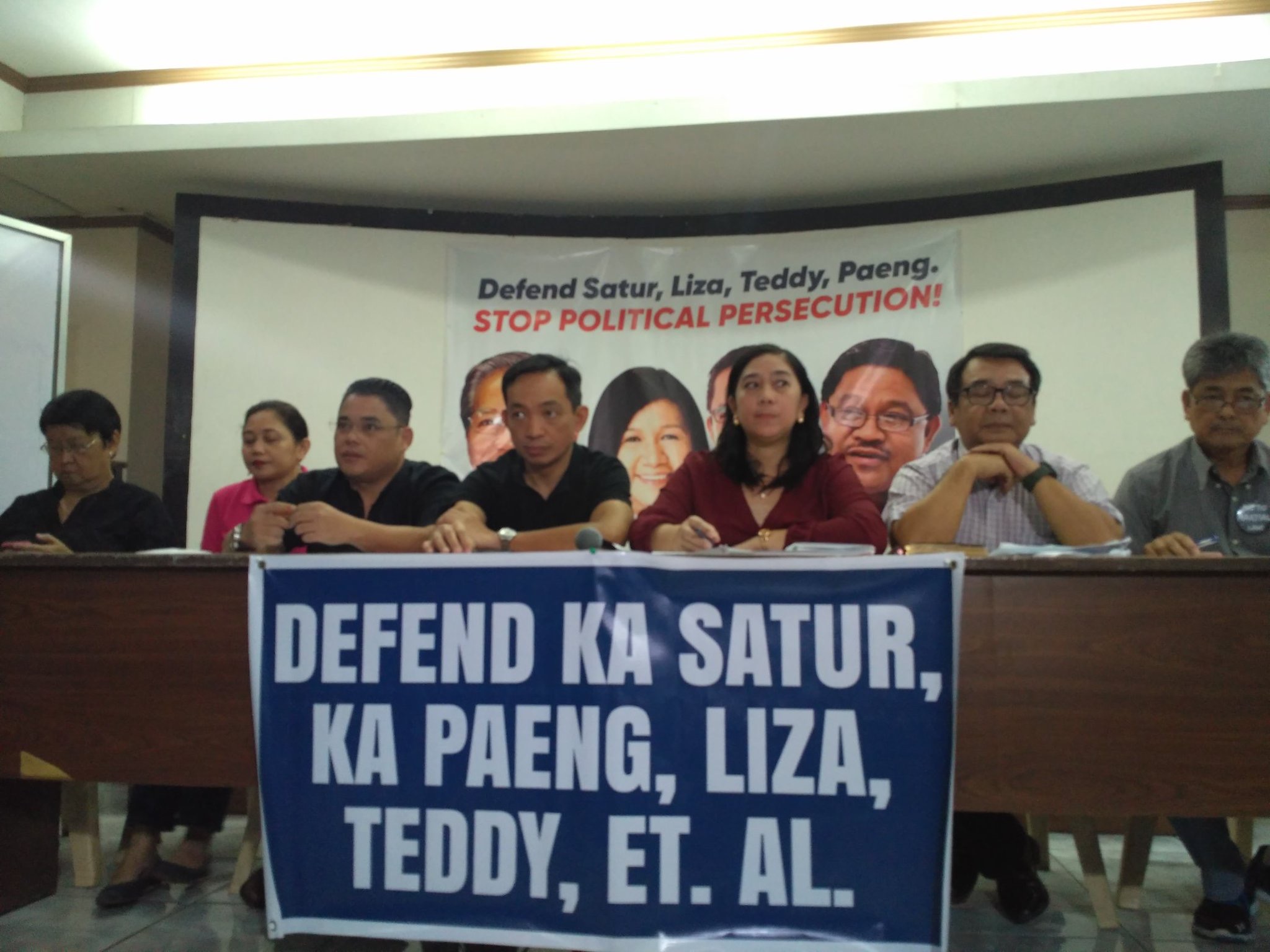 “This attempt to curtail my liberty and stop me from my advocacies and social involvement is happening in the shadow of Duterte-Arroyo-Marcos alliance.”

MANILA – Former lawmakers of progressive partylist groups decried the issuance of arrest orders against them by Palayan Regional Trial Court Branch 40 Judge Evelyn Atienza-Turla over a double murder charge filed against them way back 2006.

In a resolution released on July 11, Turla opined that there is probable cause on the charges filed against Bayan Muna Representatives Teddy Casino and Satur Ocampo, National Anti-Poverty Commission Convener Liza Maza, and former Agrarian Reform Secretary Rafael Mariano and therefore ordered the arrest of the four leaders. A double murder charge is a non-bailable offense.

In their statements, the four strongly condemned the revival of the case. Casino called it a “desperate and reckless witch-hunt by the Gloria Macapagal Arroyo regime against the progressive partylists.”

“This attempt to curtail my liberty and stop me from my advocacies and social involvement is happening in the shadow of Duterte-Arroyo-Marcos alliance,” Casino added.

Mariano said the case is “baseless, malicious, and fabricated.”

Lawyer Rachel F. Pastores, managing counsel of the Public Interest Law Center (PILC), said, in a press conference on Friday July 27, that the case is a remnant of the cases filed against the Batasan 6. The Batasan 6 were Maza, Ocampo, Casino, Mariano, former Bayan Muna Rep. Joel Virador and the late Crispin Beltran of Anakpawis Partylist.

Ocampo, in his statement, said the case filed against them were “patently baseless.”

She cited the rejection of Mariano as Agrarian Reform Secretary and Judy Taguiwalo’s re-appointment as Social Welfare Secretary.

“Ka Paeng Mariano’s attempts at wide-scale land reform and strong policy against land-use conversion were met with stiff resistance from landowning families, most of whom are also in positions of power, and rejected his appointment as Agrarian Reform Secretary. Judy Taguiwalo’s crusade against political patronage in the delivery of services also ended in her removal as Secretary of Social Welfare and Development,” she said.

As NAPC secretary, Maza said, she “have endeavored to transform the agency into a more faithful and active champion of the Filipino poor, pushing for meaningful policy reforms that are necessary to end poverty with the broader participation of the basic sectors.”

“Political persecution under the Duterte regime is part of the worsening attacks on the fundamental rights and freedom of genuine agrarian reform advocates and human rights defenders,” said Mariano.

The Makabayan bloc also condemned the warrant of arrest against their four former colleagues saying that this is a “classic move of Arroyo when she was in power.” ACT Teacher Party Rep. Antonio Tinio said that during the Arroyo regime, there were a number of activists who were persecuted with trumped up cases such as the 72 activists in the Southern Tagalog region who were charged with murder in relation to an ambush incident in Mindoro Oriental.

Former Bayan Muna Rep. Neri Colmenares said that charges against the four should be dropped as it was proven that the claims were false.

Supporters of the four leaders were also present during the press conference and expressed their support and vow to protect them if police would act on the warrant.

“Let’s help our former colleagues and call for the dropping of the case immediately,” said Taguiwalo adding that attacks against progressive leaders should also be stopped.

Satirist Mae Paner of #BabaeAko campaign said it is ironic that those who help the poor are the ones who will be detained while those who “plunder the nation’s resources and public funds” remain at large.

“Can we imagine them inside jail? If they think that imprisoning them will silence us (critics) they are wrong. We will further unite and we will be stronger because we are with them in fighting for the truth,” she said in Filipino.

Former Congressman Lorenzo Erin Tanada also questioned the timing of the arrest order. “We don’t know if this has got to do with the successful unity of different groups in last Monday’s state of the nation address (protest). But we will not waver in our struggle,” he said.