You Are Here: Home → 2018 → August → 24 → ‘Something fishy in galunggong importation’ | Fisherfolk group warns of impact of fish importation on prices, food production and security

‘Something fishy in galunggong importation’ | Fisherfolk group warns of impact of fish importation on prices, food production and security

Citing the experience with rice importation, Pamalakaya warns that contrary to government claims, fish importation would eventually increase prices of fish and would not prevent shortages.

MANILA – “There is no shortage of fish in the Philippines… The problem of inflation and rising prices of fish can be resolved but not through importation, which will only worsen it.”

These, among others, are the messages the fisherfolk group Pambansang Lakas ng Kilusang Mamamalakaya ng Pilipinas (Pamalakaya-Pilipinas) tried to deliver this Wednesday to the central office of the Bureau of Fisheries and Aquatic Resources (BFAR). They picketed its gate and ate a packed lunch of rice and galunggong (round scad) to demonstrate how our local fishes and galunggong are tastier, fresher and safer to eat than any imported, likely chemical-treated, frozen fish.

Worse, they warned, the imported fish would most likely be coming from our own fishing grounds, only frozen in the countries of source and brought back to the Philippines to the detriment of not only the Filipino fishers but also of consumers.

Since the newly installed House Speaker and former president Gloria Macapagal-Arroyo floated the idea of allowing fish imports, fisherfolk and peasant groups have been up in arms against it. But, Agriculture Secretary Emmanuel Piñol went ahead and approved the importation of 17,000 metric tons of galunggong through Fisheries Administrative Order 195.

On the government justification that importation will stabilize local prices, the fisherfolk group warned that on the contrary, similar to what has been happening with rice, fish importation starts a new chapter in degrading the country’s production base for the sake of liberalization policies being pushed by the country’s creditors and the World Trade Organization. Based on Bulatlat’s discussion with fishers and farmers, the order allowing the start of fish importation will, similar to rice, result in increasing prices of fish, further insecurity in food and in the livelihood of the country’s farmers and fishers.

Allowing fish importation is just the next logical bad step the Philippine government is taking against Filipino fishers and consumers, the fisherfolk said. 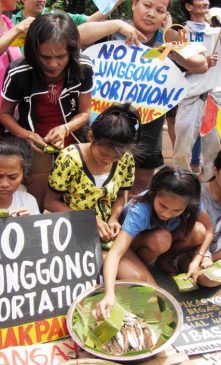 According to leaders of Pamalakaya from Central Luzon to Southern Tagalog, the first bad step the government made was when it restricted local and small fishers from the country’s municipal waters, yet allowed the entry into these same waters of more and more giant commercial fishers. Eventually, these giants who are better equipped are hauling tons upon tons of fishes per trip while the small fishers’ catch dwindled to barely enough for their family’s needs.

Pamalakaya blamed the loss of fish stocks in the sea to the giant commercial fishers who, they said, have monopolized the country’s abundant fishing grounds.

The resulting crisis of seemingly depleted fish, in turn, has become the Philippine government’s diving board for further marginalizing small-scale fisherfolk right in their own municipal fishing grounds. Citing as justification the need to address the wanton depletion of fish, the Philippine government has imposed strict fishing regulation and closed fishing season, fisherfolk said. But it has largely trained its guns on small-scale fisherfolk, regional Pamalakaya leaders told Bulatlat.

But if the government is indeed concerned about the rapidly depleting fish, it should instead correct the liberalized entry of big and often foreign fishers as per the Fisheries Code, Fernando Hicap, chairperson of Pamalakaya, said.

One of the biggest reasons there is runaway inflation today in the Philippines is the imposition of Tax Reform for Acceleration and Inclusion (TRAIN), which expanded and increased indirect taxes. But rather than address the growing people’s clamor to scrap the new tax law, the government is “addressing” the higher prices with measures that make the leaders of fisherfolk, farmers and consumers group cringe. Hicap reiterated the need to scrap TRAIN. At the same time, he described as baseless the other justification being raised in favor of allowing fish imports, the supposed fish shortage or the need to stabilize fish supply.

“We’ve heard that before,” said Cathy Estavillo of Bantay Bigas alliance. The country has been importing rice since 2000s, but prices have also increased and the rice cartel continues to exist, stronger than ever, Estavillo told Bulatlat.

Hicap warned that the same thing will happen with fish once importation begins. “This is the start,” Hicap said, of non-stop increase in price of fish products, like the price of rice that increased and rice shortage that continued from time to time despite rice importation.

Why import when the Philippines has rich biodiversity including in marine life, when, as an archipelago, it has abundant coastal resources? “We have the most beautiful, plentiful and delicious species of fish, why hand it to large, frequently foreign commercial fishers and restrict poor Pinoy fishers?” Hicap asked.

The fisherfolk group said it is not true that there is an ongoing shortage of galunggong. They said the current shortage is artificial, because the government has strictly banned fishing in certain areas supposedly to allow new fish to grow. But, Pamalakaya said, if the government would restrict just the giant commercial fishers who monopolize the catch of our various fish species from municipal waters, the country will not suffer from loss of fish stocks in the sea.

These big fish firms usually export the fish they caught in our waters, unlike municipal fishers who directly supply marine and aquatic products to the local market for the consumption of the Filipino people, Hicap explained.

“We are the one who must be given support and subsidy by the government and not commercial fishers and giant traders,” the Pamalakaya leader added.

Based on Pamalakaya research, galunggong accounts for less than a fifth of commercial fisheries production; it’s only 6.2 percent of municipal fish production. Given the apparent small share of galunggong, Hicap wondered why the rush to allow importation of this fish.

The fisherfolk group also called for the resignation of BFAR Director Eduardo Gongona, for having allowed and justified the flooding of imported galunggong.

“The BFAR should be the last government agency to agree with this liberalization policy but apparently, both the Department of Agriculture and BFAR are serving as instruments of giant traders and importers in raking profit from importation while leaving the local food producers behind,” Hicap also said.

The fisherfolk expected leadership from the BFAR to address the plight of the fishing sector and develop the fisheries industry. During their picket in front of BFAR, fisherfolk from Cavite and Bataan expressed disgust that on the contrary, the country’s fishing sector is getting more and more marginalized in the government’s moves and plans.

“We call on Director Gongona to step down from his post as he is obviously not suitable to lead the agency that is supposed to address the plight of the fishing sector and develop our fisheries industry,” said Hicap.