More than 1.7 million people were affected by the typhoon-enhanced monsoon rains that have battered Luzon over the past months. The torrential floods that take weeks to recede, and the mud and debris it leaves over everything, felt like Typhoon Ondoy all over again.

In Metro Manila, questions abound as to why nothing much has changed in the region’s perennial vulnerability to extreme rainfall and its chain of hazards. Nine years after Tropical Storm Ondoy, this vulnerability sends a chilling warning of the climate crisis we are facing. Here are four major persisting problems that point to why floods and disasters in the capital region won’t be going away anytime soon.

Scientists have predicted that with human-induced global warming comes wetter precipitation events (more rains or snow). Given today’s business-as-usual levels of emissions of greenhouse gases, this won’t likely be the last time our country will experience more frequent and very extreme rainfall events.

Though some of the recent typhoons did not directly make landfall, various areas in Metro Manila have experienced above-average amounts of rainfall. It happens especially when a storm outside of the Philippine mainland is enhancing the monsoon. The 24-hour rainfall amount measured by PAGASA (Philippine Atmospheric Geophysical and Astronomical Services Administration) in its station at the Science Garden was 270 mm, at the peak of the monsoon rains, last August 11. It was already more than half of a month’s worth of normal rainfall that got dumped in Quezon City alone.

As the planet also heats up, the meltdown of the coastal ice shelves, polar ice caps, and seawater expansion will accelerate and add more mass of water unto the oceans. This in turn would help increase sea levels, posing flooding and storm surge risks to more and more coastal communities. Extreme rainfall and sea-level rise make a one-two punch that is surely going to strike at the gut of the poorest of the poor, the most vulnerable sector to climate change.

Sea level around Manila has been reported to have risen by 80 centimeters (0.8 meters) since the 1960s. By 2050, the mean sea level along Manila Bay is expected to rise another 50 centimeters. It might not look much, but an increase of 0.8 meters translates to almost three feet increase in coastal water levels. A rushing flow of water just two feet deep is enough to knock down a standing adult. This sea level rise does not bode well in terms of coastal Manila’s storm surge hazard risk and saltwater intrusion of its aquifers.

Even as poor countries like the Philippines contribute very meager amounts to global carbon dioxide emissions (it emitted a mere 0.00369 percent of global carbon dioxide emissions in 2017), the habagat floods and the suffering of the poor which got affected by the floods show the continuing gross injustice as the richest, largest emitters such as the United States, stubbornly refuse to cut down their emissions while the poorest continue to bear the brunt of their refusal to cut down emissions.

Another contributor to flooding along Manila Bay areas are the fishponds and reclaimed areas along estuaries which prevent the rapid draining of floodwater from the inlands. The urban poor are definitely not the ones which own and construct the large reclamation areas and fishponds that block the flow of floodwater.

Massive, unhampered series of quarrying projects, as well as the expansion of real estate projects, and continuing illegal logging in the Sierra Madre, all contribute to the degradation of our watersheds. Rodriguez and San Mateo, among the most affected by the mudflows triggered by excessive rains, lies within the Upper Marikina River Basin (UMRB) area. This watershed encompasses 26,126 hectares and five areas in Rizal province, namely: Rodriguez, San Mateo, Tanay, Baras, and Antipolo City.

In Rodriguez, Rizal alone, there are three quarrying firms with approved Mineral Production Sharing Agreements (MPSAs) operating within a combined area of 409.29 hectares. For all towns straddling the UMRB, there are a total of 11 firms mining for construction or quarry material, in a combined 1,509.61 hectares. This figure does not include quarrying firms that are illegally operating despite having no permits from the government or are have permit applications that have yet to be approved by the government. 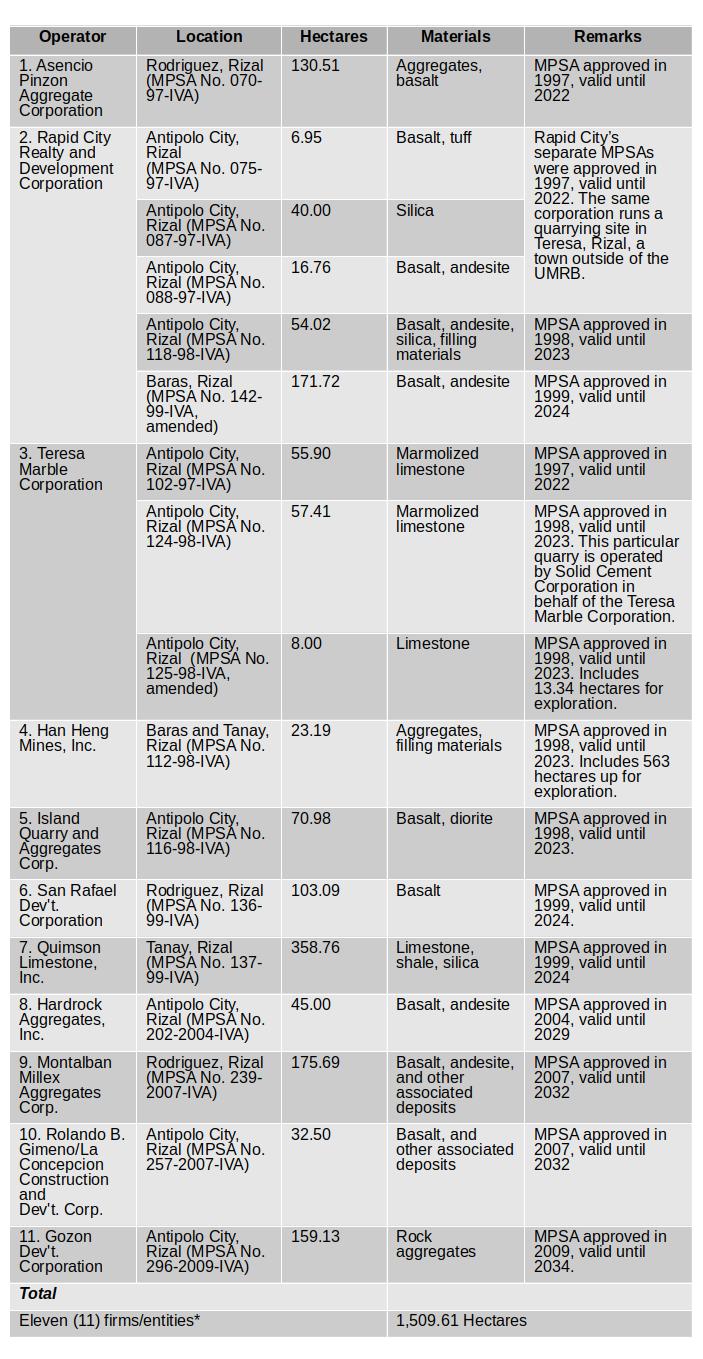 From the online records of the Housing and Land Use Regulatory Board (HLURB), there are at least 29 real estate development firms in Rodriguez which have been issued licenses to sell (Table 3). Rodriguez is a prime real estate destination for developers because of its scenic views. Some projects have been set up in slopes with steepness levels beyond that is permitted by law, further aggravating topsoil loss and rendering more unsuspecting buyers vulnerable to landslide hazards.

Table 3. List of developers in Rodriguez, Rizal issued licenses to sell by the HLURB

Some of the biggest listed properties in the town include the 4,479-hectare Marigold Subdivision Phase 2 project by Borland Development Corporation; the 2,143-hectare C.A. Mountainview Villas by a certain Erlinda Mallari; and the 5,107-hectare San Agustin Subdivision project by a certain Felicidad Suba.

The DENR itself reports that the Upper Marikina River Basin’s forests and that of its adjacent Kaliwa Watershed are losing 408 hectares a year. With the boom in real estate and construction projects, the demand for more aggregates for construction projects will spur more quarrying activities, more clearing of forests and vegetation, and more real estate construction activities, in turn leading to more degradation in the watershed areas.

When heavy rains come, the quarry sites, bereft of trees, become sources of loosened silt and boulders that get washed off by floods and eventually end up downstream as thick mud deposits.

The concretized subdivisions in the highlands will worsen flooding downstream as their concrete lanes and structures would block rainfall from getting absorbed by the soil, thereby turning the excess water runoff into floods. In an era of extreme rainfall events becoming the new norm, these are unwelcome developments.