Fourteen years after the Hacienda Luisita massacre, farmers still fight for their land. The Cojuangco-Aquinos have regained control of the vast sugar plantation with the aid of the Department of Agrarian Reform, military and police.

HACIENDA LUISITA, Tarlac — Pastor Gabby Sanchez of the United Church of Christ in the Philippines (UCCP) was among the first to arrive at the site where his eldest son Juancho was killed exactly 14 years ago.

On Nov. 16, 2004, Juancho was at the picketline, providing support to the striking sugar workers when state security forces opened fire. When silence came, Juancho and six others lay dead.

“He would have been 34 years old today,” the 68-year-old pastor told Bulatlat. Juancho died at 20, not fulfilling his dream of becoming a mechanical engineer. He was already on his third year at the Tarlac State University when he was forced to stop schooling to help augment the family’s income.

Sanchez continues to honor his son’s memory by not giving up the fight for land. He rejected several offers from what he said were Cojuangco-Aquino dummies to rent his one-hectare of land. “They were forcing me but I did not budge,” Sanchez told Bulatlat.

While the parcels of land beside Sanchez’s farm lot in barangay Balete are now devoted to sugarcane, Sanchez has opted to plant corn and eggplant.

Cojuangco-Aquinos regain control of the land

Sanchez is one of the few who was able to resist temptations to lease or sell his land after the Supreme Court’s April 24, 2012 decision ordering the distribution of 4,916 hectares of Hacienda Luisita land to the original 6,296 original farm-worker beneficiaries.

Today, trucks were parked outside the Central Azucarera de Tarlac (CAT), with workers hauling sugarcane. According to Alyansa ng Magbubukid sa Gitnang Luson, at least 80 percent of the land are back to sugarcane production. 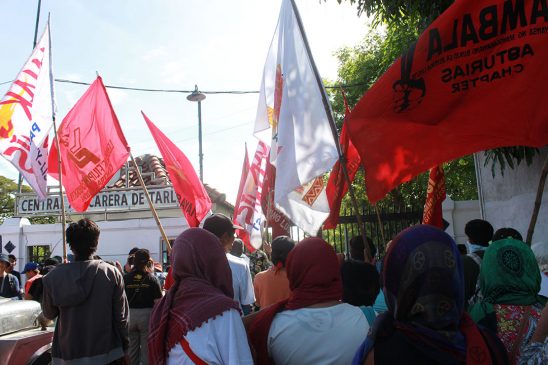 After the SC decision, Dizon said the DAR formed agrarian reform beneficiaries organizations (ARBO) to pit against Ambala. He added that instead of providing the much-needed facilities and financial support for their bungkalan (cultivation for food production), the DAR pushed for sugar block farming, benefiting the sugar mill of the Cojuangco-Aquinos.

“Without money to pay for amortization, the DAR officials themselves enticed the farmworker-beneficiaries to work with sugarcane financiers linked to Cojuangco-Aquinos,” he said.

Meanwhile, areas tilled by Ambala for bungkalan were destroyed by security guards and goons hired by Cojuangco-Aquinos, often with the aid of DAR officials. After the demolition of huts and destruction of crops, hired men fenced off bungkalan areas with barbed wire and concrete walls. Soldiers would roam around the villages.

The farm workers and supporters staged a protest in front of the Camp Servillano Aquino, headquarters of the Northern Luzon Command, to denounce the military presence in villages.

While the program was going on, 64-year-old Milagros Gonzales became teary-eyed. She told Bulatlat in Filipino, “I remember how the soldiers hang one of the victims’ bodies at the gate [of CAT].”

“I’m tired already. I would have wanted to stop but my granddaughter reminded me of what I told her years ago, ‘Walang iwanan.’ (No one’s quitting. We’re all in this together),” Gonzales said.

Her granddaughter, 12-year-old Angela Tuviera, was the one who pushed her to join the protest today. In her speech the night before, the girl called on Hacienda Luisita farmworkers to unite once again amid reports of demolition of their homes to pave the way for commercial establishments.

“We were crying after listening to her,” Gonzales said. “She wants to become a lawyer and fight for justice for all us.”

Asked why she joins her grandmother, the Grade 8 pupil told Bulatlat, “Because I know that what the Cojuangco-Aquinos are doing is wrong.”