You Are Here: Home → 2019 → February → 25 → How redbaiting triggers the killing of activists in the Philippines

How redbaiting triggers the killing of activists in the Philippines

When is it acceptable to red tag an activist in the Philippines? Never, unless you are among the rabid state-backed forces advocating the prohibition of communist philosophy and the violent persecution of individuals and groups accused of advancing communist causes. It is politically-incorrect even if the intent is to ridicule the supposedly ‘obsolete’ politics of the Communist Party. It is never a harmless act in the context of Philippine politics.

Redbaiting was aggressively used to attack Leftist and Left-leaning forces during the Cold War era. Even nationalist leaders like Senator Claro M. Recto were tagged as communists for espousing an independent foreign policy in the 1950s. Congress replicated the McCarthyist witch hunt trial which targeted suspected communists but was described as a campaign to expose “anti-Filipino” activities in the academe and the bureaucracy. It is ironic that this anti-communist drive led to protests organized by students who would later re-establish the CPP in 1968.

The dictator Ferdinand Marcos invoked the communist specter to justify the imposition of Martial Law. He tapped the strong anti-communist sentiment in the military hierarchy to hunt down and silence the burgeoning opposition led by communists and their alleged sympathizers. This unleashed a wave of violence across the country, victimizing thousands of civilians accused of resisting Marcos’ New Society and collaborating with communists who were called enemies of the state.

Marcos was ousted in 1986 but the anti-communist doctrine that guided the growth and actions of the military remained intact.

The Martial Law implementer Fidel Ramos repealed the Anti-Subversion Law which means membership in the CPP is no longer a crime. This legal reform is a sham since, in the eyes of the military and other reactionary forces, the CPP is a criminal network and a security threat which must be vanquished.

The rise to power of Gloria Arroyo saw the government parroting the “war on terror” of the United States which led to the branding of the CPP as a terrorist group. It was during this period when the counterinsurgency program identified the liquidation of the supposed civilian support system of the New People’s Army as a key link in defeating the armed struggle in the countryside. It enabled the likes of Palparan to consider the work of activists as equal to what NPA combatants are doing which resulted in the surge of extrajudicial killings and enforced disappearances. 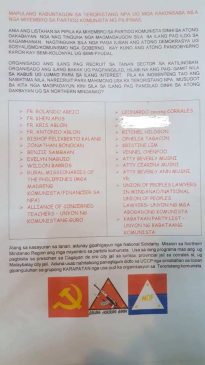 Hundreds of activists were reportedly included in the military’s Order of Battle. Their names and faces were plastered on wanted posters. They were demonized in black propaganda operations in schools, churches, and communities. They were slapped with trumped-up cases and subjected to intense surveillance and arbitrary arrests.

The human rights situation deteriorated into an alarming level which forced the Supreme Court to promulgate the Writ of Amparo and Writ of Habeas Data as legal protection measures. Human rights became a major election issue in 2007.

If these counterinsurgency tactics seem familiar, it is because a similar model was applied in the brutal implementation of Tokhang in 2016 and 2017. Drug users in government watch lists, drug dealers demonized as subhuman by no less than the president, and soon the drug suspects were killed by the police, vigilantes, and riding in tandems.

Arroyo’s henchmen are back as trusted subordinates of Rodrigo Duterte. They are whipping anti-communist hysteria to normalize “all-out war” operations while deceptively talking about peace and reconciliation. The CPP is still considered as a terrorist group, anti-Filipino, and security threat whose leaders and members are outrightly denounced as murderers, extortionists, and arsonists.

The black propaganda machinery of the state has polluted the Internet with content intended to obfuscate the intensifying attacks against activists and other critics of the government. The ‘red menace’ is conveniently blamed for destabilizing the government.

Redbaiting reflects a lazy mentality but it is a tried and tested lethal weapon. Politicians point to communist infiltration every time they ran out of arguments in debates. It is convenient for them because they know the enduring legacy of ‘red scare’ in the country and the ideological support they can get from various influential opinion-making institutions.

That is why it is disheartening to see non-state actors echoing the military propaganda about the work of activists. Not content with rejecting the campaigns of activists, they had to insinuate that these activists are CPP and NPA fronts. This is classic redbaiting extracted from a page in the counterinsurgency playbook of the military.

It is a partisan statement articulated in a way to project objectivity. A seemingly inoffensive argument that has fatal consequences. It ignores the history of what the anti-Left establishment is capable of doing to preserve its hegemony.

A redbaiter thinks he or she is merely asserting an academic statement but it is irresponsibly naïve because it assumes that the words uttered have no deadly impact in our political context. That a redbaiting statement will not be documented, recorded, archived, and can be easily revived by the state and state-funded ideologues to harm activists. At a time when the tools of disinformation could reach millions in an instant, there is a real danger of converting a redbaiting meme into a vicious spin to provoke violence against activists.

Some resort to redbaiting out of spite against activists without thinking that what he or she did could be weaponized against a group of people who may be full-time activists and lifelong change advocates but are not part of the underground movement.

There are redbaiters who experienced the horrors Martial Law but have no qualms in calling activists as CPP cadres. There are those who preach about political-correctness and the careful consideration not to offend the sensitivities of vulnerable individuals but are callous in tagging their ideological rivals as CPP automatons and appear to be oblivious to the fact that an increasing number of activists are being harassed and killed by state forces.

There are redbaiters who demand transparency and challenge the CPP to go legal and adopt the practices of the so-called New Left and other social movements in the world. But they speak as if the political situation in the countries they mentioned is the same with what we have in the Philippines. They refuse to recognize the particularity of the national liberation movement. They claim to represent a disinterested position even if their political advocacy and affiliation are biased against the national democratic movement.

No one has stopped them from lampooning the CPP in local and international platforms. But they turned their valid right to criticize into a cheap redbaiting ploy to attack activists. It is therefore not a surprise to learn that the state has used their work to develop a propaganda material and even legal evidence to persecute militant activists while praising the politics of the moderates.

No one has stopped them too from mocking the methods and aims of activists. But perhaps they think they can quickly accelerate their personal and political careers by naming the CPP-NPA supporters in public. Some believe it is an exercise in truth-telling, some assume they are being witty, while others equate redbaiting with defeating the “undemocratic” Left.

They might think they have sophisticated reasons and motivations but in the end it is all in the aid of counter-revolution in real existing politics. It is essentially an act to weaken the people’s resistance. It is a choice, political standpoint, and deliberate act of taking side and thus it is ultimately reactionary in a society where there is a sharpening political conflict.

In other words, a redbaiter exposes his personal and political degeneration.

What can we learn from the history of redbaiting in the Philippines? That it is a potent tool in legitimizing violence but at the same time ineffective in stifling dissent. And that it is about defending the present but it has never succeeded in preventing the people from struggling for a different future.