Filipino, foreign lawyers demand a stop to the killings. pic.twitter.com/vUDN8rvbq6

“We cannot expect to be able to fight for justice if we cannot protect the peoples’ lawyers.”

MANILA — Alarmed with the attacks on lawyers, judges and prosecutors in the Philippines, nine foreign lawyers from six different countries have come to the country to conduct their own investigation.

The fact-finding mission is composed of lawyers from Belgium, Italy, Japan, Korea, the Netherlands and United States.

Suzanne Adely of National Lawyers Guild (NLG) of the U.S, and International Association of Democratic Lawyers (IADL) said the delegation is hoping to collect information and answers from government institutions about the alarming rate of extrajudicial killings of lawyers and judges.

According to the Integrated Bar of the Philippines (IBP), 38 lawyers have been killed under the Duterte administration. On March 14, another lawyer, Rex Jasper Lopoz, was gunned down in Tagum City. 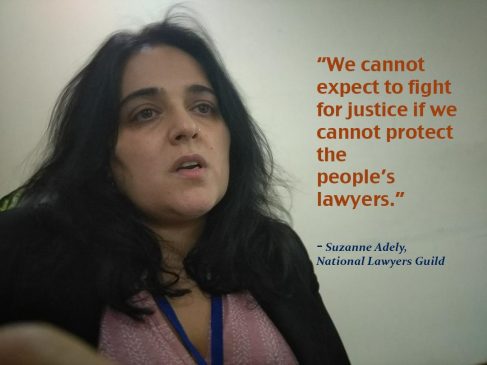 Adely said their mission will focus on the extrajudicial killings of lawyers. “We cannot expect to be able to fight for justice if we cannot protect the peoples’ lawyers,” Adely told Bulatlat in an interview.

A trade unionist based in New York, Adely said she has been active in solidarity work with Filipinos in the U.S. and has learned about the political situation in the Philippines from her Filipino friends. “I always knew that I would come at some point,” she said.

Also joining the delegation is Johannes Karel Geesbaak, director of the Foundation for the Day of the Endangered Lawyer, who joined similar missions in the country during the Gloria Macapagal-Arroyo administration.

“The situation has not changed since the last time,” Geesbaak said during the colloquium held at the IBP building, March 15.

International fact-finding missions investigating the attacks on Filipino lawyers were conducted in 2006  and in 2008.  The 2008 mission noted little or no progress has been made in the cases investigated in 2006.

This time, the mission will look into 15 incidents of attacks against lawyers, judges and prosecutors, according to Edre Olalia, president of the National Union of Peoples’ Lawyers (NUPL). These include the murder of Benjamin Ramos and the red tagging of NUPL members in Panay.

The foreign lawyers are scheduled to meet with government offices, law enforcement agencies, bar associations, law professors, non-government organizations, and victims and/or their families. They will release their findings next week.

Gaasbeek said they will try to bring the issue to the Philippine government and even to international institutions.

Want to read stories like this? More lawyers are braving it out, facing difficult conditions to defend and advance human rights. Help us keep up with their activities and cases.