“By deliberately using those photos with the status ‘Communist NPA CPP NDFP supporters’, the lives and security of those persons are placed in danger.”

(UPDATED: May 11, 2019, 7:40 p.m.) MANILA — Health workers, professionals and advocates held a protest action in front of Facebook Philippines office in BGC, Taguig City on Thursday, May 9 for the latter’s inaction on their complaints against certain pages that peddle lies.

In particular, the groups cited Nurses for Change Movement and Stop Communists in the Health Sector* Facebook pages which tagged health organizations as supporters of the New People’s Army, Communist Party of the Philippines and National Democratic Front of the Philippines (CPP-NPA-NDF).

In a statement, Dr. Joseph Carabeo, secretary general of Health Alliance for Democracy, raised hell over the use of pictures of their colleagues without their knowledge and consent. “By deliberately using those photos with the status ‘Communist NPA CPP NDFP supporters’, the lives and security of those persons are placed in danger,” said Carabeo. 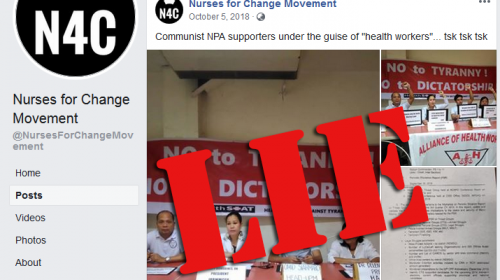 Carabeo said they have done the necessary measures like reporting the said Facebook pages but there have been no action so far. The Facebook pages remain active because apparently, according to Facebook, the reported pages and posts “do not go against its ‘community standards.'”

Carabeo said they also went to the Facebook Philippines office on March 20 to formally request for an appointment with its representatives but to no avail. They were met by the security guards who explained that no staff or officer can meet them at that moment. The security guards explained that the request for appointment will be responded to by Facebook’s Singapore office. The guards also refused to receive their letter saying that they only receive documents from courts. Carabeo’s group has not received any response from Facebook up to now. 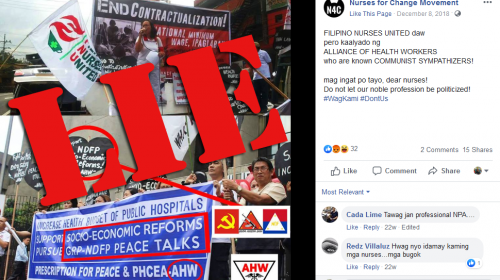 “Our colleagues felt as though Facebook is only interested in raking-in money from its users worldwide but refuse to take action when users report a page that they find offensive or propagates harassment, disinformation, and threat to life and safety,” said Carabeo.

The groups called on Facebook to “seriously take action on posts and pages that perpetuate red-tagging, disinformation and impunity.”

“We are appalled at how Facebook is used by the people behind this page whose motives are obviously malicious, to brazenly attack persons and organizations simply for exercising their right to free expression on issues that are legitimate or valid,” Carabeo said.

Carabeo said that they will exercise all legal remedies to expose the people behind the said Facebook pages.

Meanwhile upon checking of the said Facebook pages, the Stop Communists in the Health Sector Facebook page is no longer searchable in the said social media platform while the Nurses for Change Movement and its contents are still accessible.