“As a matter of policy, we cannot tell patients to buy medical supplies. But at the same time, we cannot provide it to them. We are caught in a bind.”

MANILA — Violeta Arcella sat quietly at one of the dengue express lane tents just outside the emergency room of San Lazaro Hospital in Manila when Bulatlat reporters chanced upon her. Traces of exhaustion and sleeplessness swept across her face, in stark contrast to a cat sleeping soundly at a nearby table as rain clouds began to gather and the wind less humid in the afternoon of Wednesday, July 31.

Arcella’s 10-year-old granddaughter is among the 46 patients in the pediatric section of San Lazaro afflicted with dengue fever. More than 100,000 dengue cases were recorded this year, according to the Department of Health.

Since Monday, their family, who hailed from Biña, Laguna, has been busy looking after her granddaughter. They have decided to take her to a Manila hospital after a local facility in Sta. Rosa, Laguna said the patient’s platelets were too low for them to handle.

A nurse of 13 years at the San Lazaro Hospital, Jaymee De Guzman told Bulatlat that they may be prepared knowledge- and skills-wise, but their aspirations of providing quality health services hang in the balance with the constant lack, if not sheer absence, of medical supplies.

Forecasting medical needs during bidding periods seem to be a constant struggle for their hospital, she said, even when it is quite common to see a spike in both dengue and leptospirosis cases during rainy months of July to October, year in and year out. As such, hospital officials almost always have to resort to emergency bidding.

Under President Rodrigo Duterte, the Commission on Audit has repeatedly called the attention of the DOH over millions-worth of un-utilized, overstocked, and expired medicines and supplies. 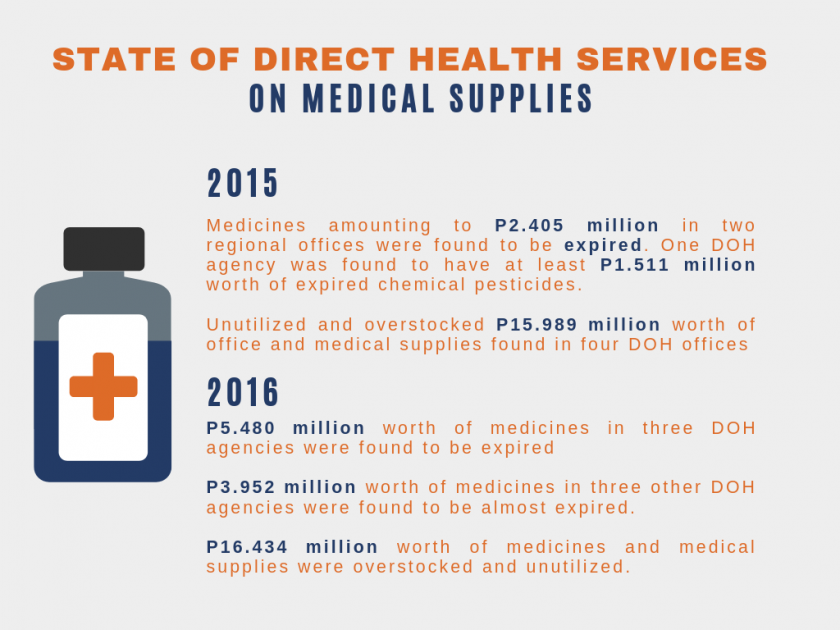 For one, De Guzman said that in the past, they have experienced having no IV fluid catheter, which is needed to ensure that dengue patients are well-hydrated. The hospital, too, has no proper blood bank, leaving families on their toes whenever there is a need for blood transfusion.

“As a matter of policy, we cannot tell patients to buy medical supplies. But at the same time, we cannot provide it to them. We are caught in a bind,” she said.

At times, nurses and staff pool funds to buy these medical supplies to give to indigent patients.

With such situation at the San Lazaro Hospital, which is a Special National Hospital Medical Center for Infectious Diseases, more harrowing tales might be heard from those in rural areas, receiving less government support.

The DOH has been implementing its “4S Kontra Dengue” to spread word about the disease. However, carrying out the program proves to be difficult, with local health centers and regional health units understaffed, said Dr. Joshua San Pedro, co-convenor of the Coalition for People’s Right to Health, in an e-mail interview.

Implementing the said program, he added, will depend on how local health workers will carry it out and the support they will get from their respective local government units.

Citing government data, San Pedro said, only 43 percent of barangays or villages in the country are equipped with health centers. This poses a big problem for those residing in the countryside, where their health centers are situated far from their homes and even farther away from hospitals and regional health units.

As such, patients could not get their much-needed treatment.

De Guzman, who is also the secretary of the San Lazaro Employees Union, an affiliate of the country-wide Alliance of Health Workers, said hospital officials must assess how their response to dengue outbreaks may be improved.

“We really have to have better planning, which may be translated through proper procurement. Suppliers who have failed to carry out their commitments must be sanctioned if not banned. Else, this scenario will repeat over and over again,” she said.

Health workers, too, she added, are demoralized as the release of their monetary incentive as a front-liner of the government’s health services continue to be stalled.

With her granddaughter fast recovering, they now start to worry over the realities they will soon have to face – paying off all the debts they have incurred for the past days.

But for now, Arcella’s fervent wish is to just see her granddaughter walk out from the hospital well. (With reports from Dawn Peña)