Lining up for health care services

Lack of sleep and at times a gnawing hunger make lining up harder for many seeking medical assistance.

The queue begins in the wee hours of the morning, with mostly relatives of those who are in need of financial assistance lining up. It’s worse for those from nearby provinces who have to travel all the way to Manila the night before to make it in time. They have with them application forms and several documents to prove their claim – with no amount too big or too little.

In fact, the queue for financial assistance under PCSO’s Individual Medical Assistance Program did not ease a bit even at the height of President Rodrigo Duterte’s pronouncement declaring lotto and other games illegal, only to be revoked two days later.

“We heard from the news that the medical assistance will continue despite Duterte’s pronouncement. But it was still worrying because, after all, we get most of the money we need for medical expenses from the financial aid from those games,” 64-year-old Zeny Magbanua told Bulatlat in Filipino.

The queue, however, for Magbanua’s family does not end here in PCSO’s charity department. The lack, if not sheer absence, of a proper public health system in the country pushes those in need to go to other government offices offering similar financial aid, or even knocking on doors of public officials and their well-off relatives and friends.

Magbanua’s daughter-in-law Tess was recently diagnosed with stage 3 breast cancer. And though they hailed all they way from Laguna, a province south of Manila, her daughter-in-law has been seeking treatment at the Philippine General Hospital. They consider themselves as among the “regulars” at the PCSO’s charity department. Of the P30,000 amount they need per treatment, the government agency pays for the P20,000.

Lack of sleep and at times a gnawing hunger make lining up harder for many seeking medical assistance. Buying at a nearby food stall can be considered a luxury for some, as they worry about the growing medical bills at the hospital.

Josephine Somejo, 48, said her cousin’s doctors’ fees alone is already pegged at P700,000 in a private hospital in Quezon City.

This is Somejo’s first time to seek PCSO’s medical assistance, after her cousin Shella Mancera’s accident in Lipa City on June 17. Mancera was crossing the street along with her husband when a bus rammed the pedestrians. Her husband was unfortunately killed in the said accident. Mancera survived but suffered serious spine injuries.

Somejo shared that the bus company refused to provide them their due financial assistance unless they sign a waiver, stating that no charges would be filed against the company. Apart from the hospital bills, the family will still have to cough up money for Mancera’s treatment and physical therapy long after she is discharged from the hospital.

They arrived 12 midnight to line up at the PCSO’s charity department, accepting gratefully whatever comes their way.

Magbanua and Somejo are like many families in the Philippines who have to find ways to cover the health expenditures of their loved ones.

Dr. Joshua San Pedro, co-convenor of the Coalition for People’s Right to Health, said most of the patients seeking help are those who are in need – without means to pay their hospital bills and other health-related concerns.

“It is saddening that many Filipinos have to ask for alms when the people have right to health,” he told Bulatlat.

San Pedro noted that in 2017, at least 54.5 percent of Filipinos are not covered by either mandatory or voluntary health care financing schemes. As such, they pay hospital bills and other related costs from their own pockets. 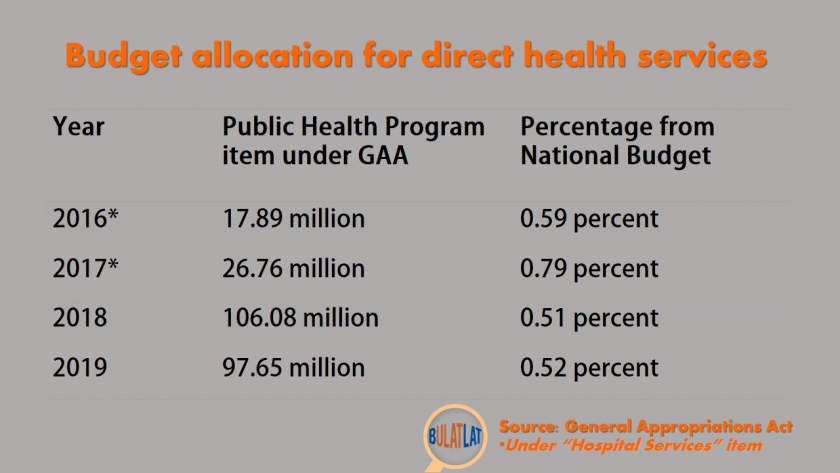 “It would be cost-effective to be pro-active. Funding preventive and community efforts, apart from allocating proper funds to public hospitals, will raise the bar of health care in the country,” said San Pedro, adding that it will prevent the spread of diseases.

Amid the stopping of the PCSO games and the eventual pronouncement that it will be allowed to continue, the pressing concern for a public health system that will truly benefit the people continues.