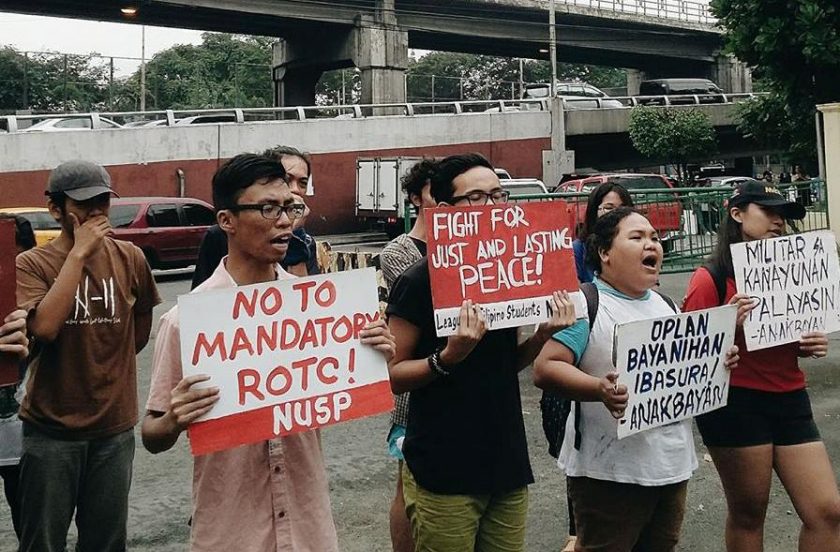 MANILA – For progressive youth groups, the death of a military student is enough proof that the proposed revival of the mandatory Reserve Officer Training Course among senior high students must be opposed.

Dormitorio’s death came in light with the proposal to make ROTC mandatory. In the recently-concluded commemoration of the 47th year since the martial law imposition by Ferdinand Marcos, students arrived with a strong call opposing the return of the mandatory military training.

Mariel Rugas, a respresentative from Girls for Peace, said,”If hazing is happening in the Philippine Military Academy, how much more if ROTC is revived?”

In light of calls for investigation, PMA graduates Sen. Ronald dela Rosa and police chief Oscar Albayalde defended hazing, saying that it has taught them discipline and that it is only a matter of “perception.”

In a social media post, National Union of Students of the Philippines President Raoul Manuel said that such statements confirm the longstanding tradition of violence in PMA.

“That is why many are worried if the Duterte administration will insist on its plan to let fascists into our school campuses to facilitate mandatory military training of minors through ROTC,” said Manuel, adding that parents “fear for the safety of their children in the hands of abusers and violators of basic rights.”

Reeya Magtalas, convenor of One La Salle for Human Rights and Democracy, stresses the relevance of commemorating Marcos’s Martial Law for it teaches the Filipinos that true nationalism does not rely on the strictness or hardships suffered under military training.

Magtalas said that “it is unfortunate and at the same time alarming that in the month where we remember the atrocities of a dictator against the Filipino people, we are shaken by similar grave violation of human rights perpetrated by another tyrant.”