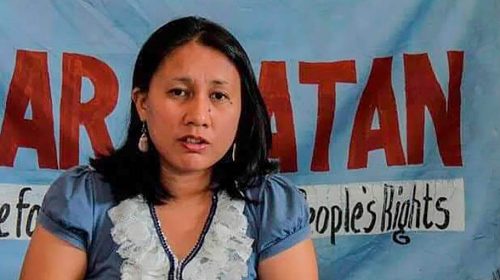 DAVAO CITY, Philippines — A human rights worker in Southern Mindanao has been reported missing, according to rights group Karapatan.

In a Facebook alert, Karapatan-Southern Mindanao Region said that Honey Mae “Hanimay” Suazo, who is also the group’s former secretary general, has been reported missing since on Saturday (Nov. 2).

In an initial report from her relatives, Suazo had left her residence early in the morning of Nov 2 to pay a visit to her departed loved ones in Panabo, Davao del Norte province. She was last seen on board to a tricycle on her way home.

Suazo previously complained of experiencing harrassment and surveillance by alleged elements of the military.

Last April, Maj. Gen. Antonio Parlade Jr. and the Armed Forces of the Philippines (AFP) accused Suazo of supposedly being a member of a communist front organization.

Suazo was also among the 15 human rights activists who were charged with kidnapping and illegal detention of indigenous people evacuees encamped at the United Church of Christ in the Philippines Haran compound in Davao City.

These charges were dismissed by the Department of Justice on 2016. (davaotoday.com) Reposted by