Aaron Macaraeg January 26, 2020 attacks on Lumad, United Church of Christ in the Philippines

The Regional Peace and Order Council of Region 12 released an order for the closure of UCCP Haran.

MANILA — Lorena Mandacawan nearly bursted into tears when she spoke early afternoon of Jan. 25, in a protest action in front of the Department of Interior and Local Government’s (DILG) head office in Quezon City.

Mandacawan, a community leader and chairperson of Lumad women group Sabokahan, was joined by various indigenous people and human rights groups to assail the forcible entry of suspected members of paramilitary group Alamara.

Among the over 500 internally displaced Lumad currently seeking sanctuary in UCCP compound are her two children, aged six and eight, and her husband.

Related story: Alamara militia works with, and for the military – Lumad

She worries for her family in Haran. They were with other over 500 indigenous lumads who left their ancestral lands from Cotabato, Davao del Norte, and Compostela Valley.

“The UCCP Haran has become our second home,” the IP leader said, “Seeking refuge does not mean backing down, as long as we are with our brothers and sisters standing with us, defending the land that sheltered us through the years, that already means home.”

Mandacawan’s fear for her family’s safety is not surprising.

Before fleeing their ancestral land in Talaingod, Davao Del Norte in 2014, her tribe, the Manobo-Matigsalong, has been subjected to harassment and red-tagging by elements of the Armed Forces of the Philippines (AFP). 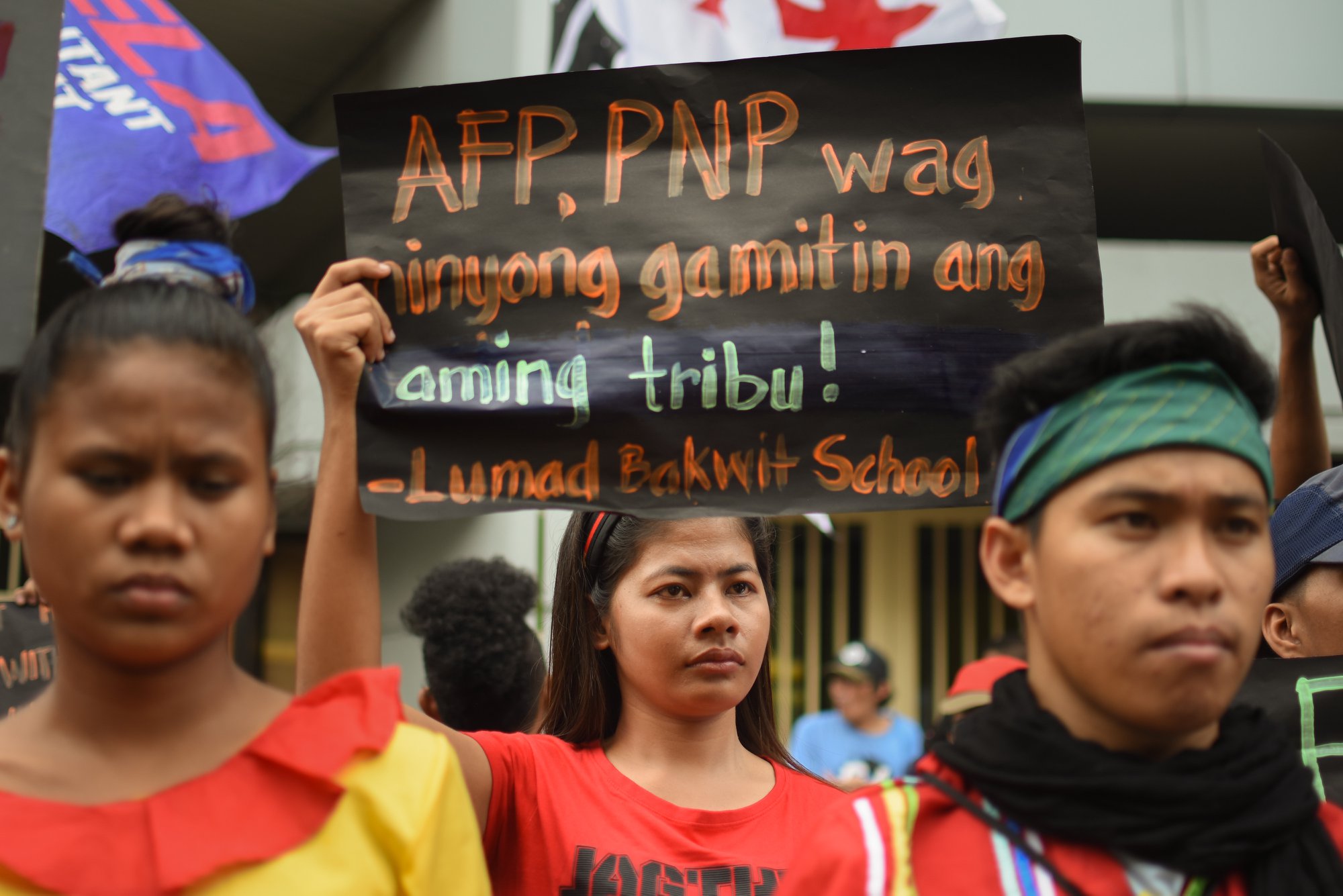 “Whenever they come to our village, they always force us to surrender purportedly as members of the New People’s Army (NPA),” Mandacawan told Bulatlat in Filipino.

Her family since then decided to seek another home, and were welcomed at the UCCP Haran compound.

Mandacawan also recalled the 2017 killing of her nephew, Obello Bay-ao, who was shot by members of the Alamara group, who claimed that the sixth grader was an NPA member.

Martial law in Mindanao, too, made things worse, with the military having the “upper hand” on the “truth,” she said.

A day after she left Davao City on January 20, along with her other seven children to go to Manila, the Regional Peace and Order Council of Region XI released an order for the closure of UCCP Haran.

“It really angers me that they will force us to go back home when they [paramilitary groups and state forces] were the ones who bastardized it in the first place,” she said.

She thanked the groups present in the protest action and those who supported the bakwits.

Bayan Muna Rep. Eufemia Cullamat, a Lumad, defended the UCCP Haran, in a statement, and called for the arrest of the members of the Alamara group.

“Isn’t it enough for them to drive us away from our ancestral lands? And now, they could easily muster the gut to drive us again out of UCCP Haran,” Cullamat said.

She also lambasted the National Taskforce to End Local Armed Conflict (NTF-ELCAC) as anti-people and was never a solution to address and resolve the roots of armed conflict.

She challenged the RPOC of Davao to instead advocate for peace.

“We’re the only ones who defend our lands,” Mandacawan said.

“And obviously, not those at the other side of the fence who force their way through.”