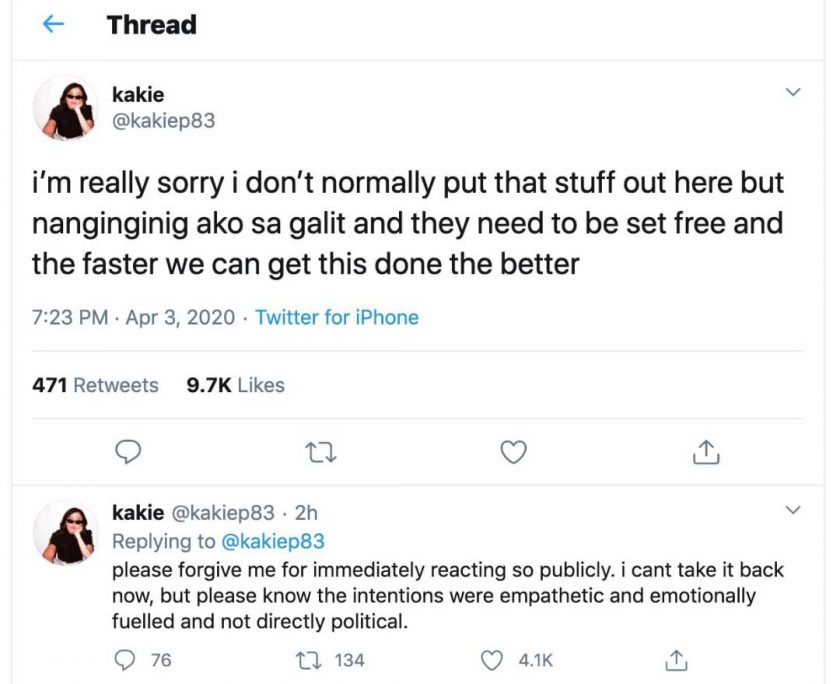 MANILA — The family of Sen. Francis “Kiko Pangilinan and actress Jodi Sta. Maria offered to shoulder the bail of 21 San Roque residents who were arrested April 1.

Initially, Frankie (with Twitter account @kakiep83) said she would sponsor the bail of one of the 21 arrested San Roque residents. She replied to the post by Bagong Alyansang Makabayan (Bayan) Secretary general Renato Reyes Jr.about the charges filed against Quezon City’s urban poor, and the bail recommended for the 21.

Frankie posted, “i’m really sorry i don’t normally put that stuff out here but nanginginig ako sa galit and they need to be set free and the faster we can get this done the better.”

Shortly after, Frankie said her parents Sen. Kiko Pangilinan and megastar Sharon Cuneta agreed to shoulder the rest of the bail, amounting to P330,000.

i’ll sponsor one. please give the details. https://t.co/R5C8Uqzqzo

Ma. Kristina Conti of the National Union of Peoples’ Lawyers (NUPL) confirmed that the office of Senator Pangilinan already got in touch with them for the San Roque 21 case.

Meanwhile, Sta. Maria also replied to Reyes’ post asking how much more is needed for the temporary liberty of San Roque 21. She pledged to pay for the bail of four residents.

May nag pledge na po for the 2 senior citizens, si @kakiep83 nagpledge na rin. So 18 to go. This appeal is from their lawyer. pic.twitter.com/ZXav3l7s6C

The 21 were arrested April 1 while queuing up for assistance outside their community. Since the start of Metro Manila-wide enhanced community quarantine until that day, sitio San Roque residents in barangay Pag-asa, Quezon City did not receive help from both the national and local government. They have been charged with violation of the public assembly law; non-cooperation under Republic Act 11332; disobedience of a lawful order or violation of Article 151 of the Revised Penal Code; spreading of false information under the Republic Act 11469 or Bayanihan to Heal as One Act; and, impeding access to roads also under RA 11469.

The 21 are currently detained at Camp Karingal. Their bail is expected to be processed on Monday.

In a statement, the NUPL which provides pro bono services to the accused, set the record straight against efforts to malign urban poor group Kadamay. “..[t]hey were not “rioting,” “agitating for trouble” or “challenging the authorities” for “political ends.” They just want to line up their stomachs with whatever crumbs they could grovel for,” the group said.

“We ask the government, where is your sense of humanity, if not justice? Your poor people are dying of hunger and you treat them as criminals,” the NUPL further said.