You Are Here: Home → 2020 → May → 1 → Rage despite physical distance’ | Groups assail gov’t failure to aid Filipino workers amid pandemic 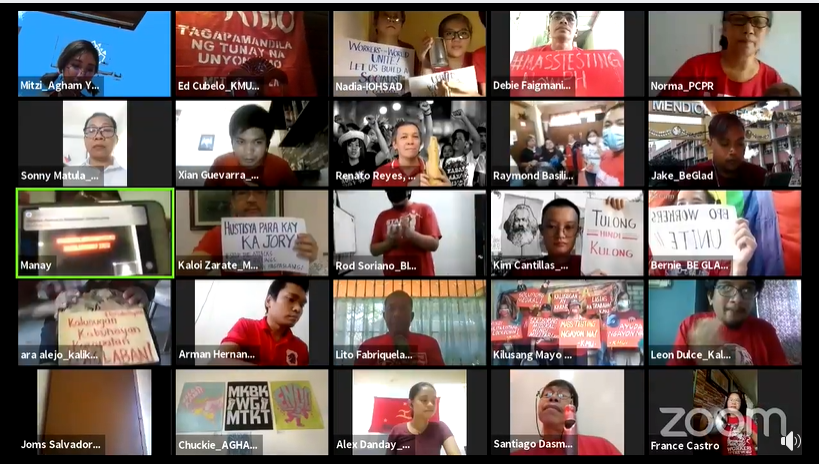 “We mourn behind the face mask. We rage over the token relief promised but not received. We rage despite the physical and social distance.”

MANILA – On International Labor Day, progressive groups here assailed the Philippine government for treating workers like criminals instead of upholding their rights and welfare as the country continues to bat the spread of the COVID-19 pandemic.

In a statement, Kilusang Mayo Uno chairperson Elmer Labog said the Duterte administration has “blatantly taken advantage of the pandemic to push their own political agenda.”

“We mourn behind the face mask. We rage over the token relief promised but not received. We rage despite the physical and social distance,” Labog said in a statement.

With a lockdown still in place in Metro Manila and several provinces, progressives marked the International Labor Day with a live program aired via Zoom and Facebook Live instead of the usual big mobilization.

Labog said that while workers are separated by social distancing, they “stand together in solidarity as they urgently call for mass testing and treatment and adequate relief and support for workers, quarantined communities, and others affected by the lockdowns.”

No aid for Filipino workers

Among the most affected in the community quarantine here are minimum wage workers, who goes on a “no-work, no pay” basis.

Ibon Foundation said 7.7 million workers and their families who were displaced due to the lockdown have yet to receive government aid, despite pronouncements by the labor department that workers will be provided their due cash aid.

This, the group added, is pushing million of Filipinos into “deeper poverty.”

The government supposedly has several line agencies providing cash grants to affected Filipinos – the biggest of this come from the Department of Social Welfare and Development, with at least P18 million at its disposal. Such aids, however, have earlier been criticized for being too slow and for falling below the government’s own poverty line of P10,727 a month.

Ibon Foundation said the Duterte administration should give their “full support to and aid those displaced” by removing “bureaucratic hurdles to accessing social amelioration and address inefficiencies.”

Labog belied that the government does not have resources to finance measures needed to provide ample support to Filipino workers.

The entire social wealth produced last year, he added, was already at $376.7 billion, per the gross domestic product data in 2019. Tax revenues, too, have increased under the Duterte administration’s Tax Reform for Acceleration and Inclusion (TRAIN) Law.

The COVID-19 pandemic has also showed the vulnerabilities facing workers in the health sector.

In a statement, the Alliance of Health Workers reiterated their long-standing demands for the implementation of a national minimum wage, the regularization of contract-based health workers, and the provision of their benefits as they serve in the frontlines against the COVID-19 amid chronic understaffing in the public health system.

“Our frontline health workers are tired and exhausted by working 12 hours duty a day, without additional benefits and living wage. Thus, we urge the DOH to immediately hire and train more permanent health workers now before its too late,” said Robert Mendoza, national president of the AHW.

The Filipino Nurses United, for its part, has earlier reiterated the current working conditions of health workers, adding that the filling up of vacant plantilla positions for health workers as part of the government’s mass hiring can lessen their exposure to the virus.

Apart from those in the health sector, government workers too have joined the protest.

Manny Baclagon, secretary general of government workers group Courage said, “”We hold the Duterte administration accountable for all the suffering and abuses. We call on the government to give rightful priority to the interest and welfare of its workers and millions of other Filipinos. We demand for humane, scientific and pro-people solutions to this COVID-19 crisis.”