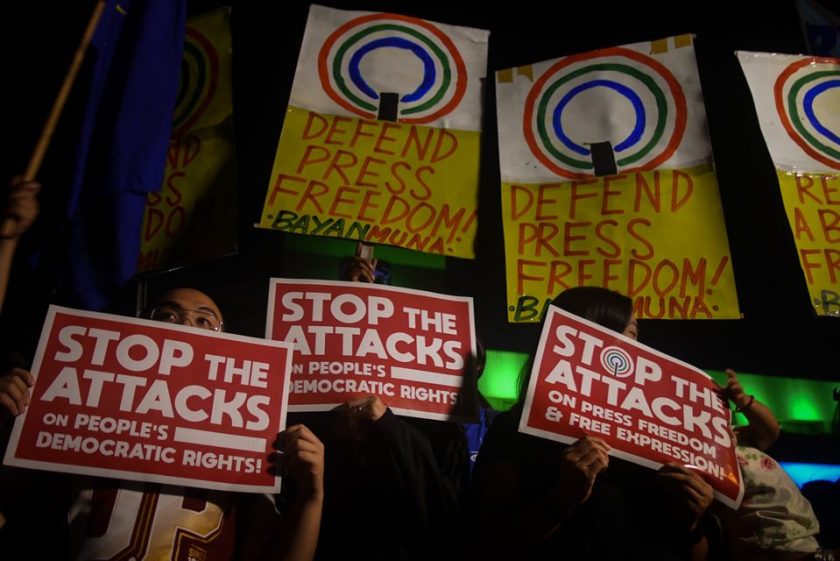 “It is high time that Congress finally hear and approve the franchise of ABS-CBN to undo the damage and attack on press freedom, freedom of expression and freedom of information perpetrated by Malacañang.”

MANILA – The Makabayan bloc called on Congress to act swiftly on the franchise renewal of ABS-CBN Corporation whose franchise expired on May 4.

“It is high time that Congress finally hear and approve the franchise of ABS-CBN to undo the damage and attack on press freedom, freedom of expression and freedom of information perpetrated by Malacañang,” the Makabayan bloc said in a statement.

As the House of Representatives (HOR) resumed its session on Tuesday, May 5, Gabriela Women’s Party-list Rep. Arlene Brosas asked the Committee on Legislative Franchise on the status of the deliberations on ABS-CBN’s franchise renewal.

“Since we are in session, why not discuss and swiftly renew the franchise of ABS-CBN? The ball has been always in our court. Unfortunately, the House dribbled the time away until we reached this kind of exigencies & brazen clampdown on the freedom of the press,” Brosas said.

Assistant Minority Leader and ACT Teachers Party-list Rep. France Castro said that it is the HOR’s function to revoke or to award franchises, therefore, it should not allow the Executive to control the functions of the Legislative branch of the government. She urged the House leadership to immediately approve the pending ABS-CBN franchise renewal bills.

The Makabayan said the closure of ABS-CBN shows that “President Duterte is determined to use the current crisis brought about by the pandemic to further advance his drive for tyrannical rule.”

“Aside from this blatant attack on press freedom on a scale not seen since the Marcos dictatorship, Duterte has continued to float the possibility of declaring martial law, even as extrajudicial killings, arrests on trumped up charges, villification, and harassment of activists and critics of the administration continue unabated,” the Makabayan said.

According to report, there are at least 50 national and local broadcast franchises that were signed into law by President Duterte during the 17th Congress. While there are pending bills for the franchise renewal of ABS-CBN, the House Committee on legislative franchises only held one hearing and failed to pass it. The Senate, meanwhile, adopted a resolution in March this year urging the National Telecommunications Commission to grant ABS-CBN provisional permit to continue operations.

Meanwhile, Kabataan Party-list Rep. Sarah Elago said that the government should focus its efforts on the coronavirus disease 2019 (COVID-19) instead of shutting down one of the largest broadcast networks in the Philippines.

“Only 10 days before the lifting of the enhanced community quarantine, let’s focus on the strengthening of the health system, aid to those in need and prepare for the restart of the economy,” said Elago.

The legislators called on Filipinos to stand for press freedom and make their voices heard by joining online and offline protests. “Write to NTC [National Telecommunications Commission], congressmen, senators and to President Duterte to state your opposition to ABS-CBN shutdown.”

“Until ABS-CBN is back on air and their franchise approved, these activities should not stop. We are not just fighting for a station, we are fighting for freedom against tyranny,” the Makabayan bloc said.

The NTC issued a cease and desist order against ABS-CBN, May 5. The network went off the air last night but its operations continue via its online platforms.