You Are Here: Home → 2020 → May → 16 → Factory worker in Cavite allegedly mauled by police over ECQ violations 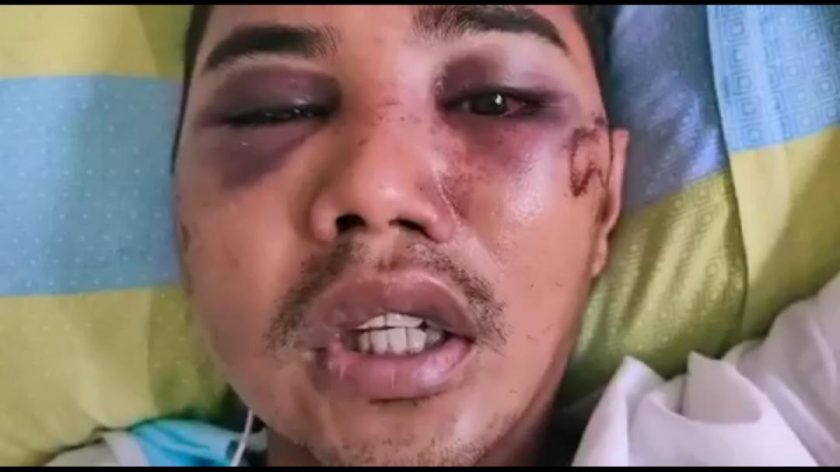 Labor group Kilusang Mayo Uno slammed the “double standard on the implementation of ECQ rules,” pointing out that this was not the first time police “exercised brutality instead of compassion amid the COVID crisis.”

Ronald Campo, 30, was arrested by General Trias, Cavite policemen in Tropical Villages, Brgy. San Francisco. Authorities claimed that Campo was brought to the police station, and that when he attempted an escape, police and barangay tanods chased after him before cornering him at a private property.

The police denied mauling Campo and said that Campo’s bruises were the result of him jumping a concrete wall and falling on the pavement. Campo suffered bruises all over his body, including a fractured skull.

Accounts from Campo’s brother, Rolando, and Campo himself tell a different tale,.
According to the brothers, Campo was arrested along with other violators the night of May 12 when he was brought to the town plaza to perform push-ups as a punishment. Campo passed out when an officer woke him up and brought him to a dark corner of the plaza where he was assaulted.

Campo tried to escape but was caught hiding in the house of a man he did not know. He was assaulted a second time, until he passed out. His brother and mother found him in the hospital the next day with most of the bones in his jaw and cheeks broken. He was begging his brother to kill him.

Labor group Kilusang Mayo Uno slammed the “double standard on the implementation of ECQ rules,” pointing out that this was not the first time police “exercised brutality instead of compassion amid the COVID crisis.”

Over the course of the ECQ, police and local governments have been involved in multiple cases of brutality and unfair treatment of ECQ violators. Early on in the lockdown, barangay officials in Sta. Cruz, Laguna received flak for putting violators in dog cages and threatening to shoot them. Amnesty International has since called on authorities to “investigate humiliating abuses by local officials enforcing the curfew.”

In a statement, KMU pointed out that “a simple curfew violation or going outside isn’t any legal basis for arbitrary arrest,” before contrasting it with Maj. Gen. Debold Sinas, who “clearly violated the ECQ, but was quickly absolved by PNP Chief [Archie] Gamboa.”

The group was referring to Sinas’ infamous “mañanita”, which made the rounds in social media to universal scorn. Sinas has since apologized for his actions.

Malacañang stated in a May 16 press conference that they will be launching an investigation into the matter.