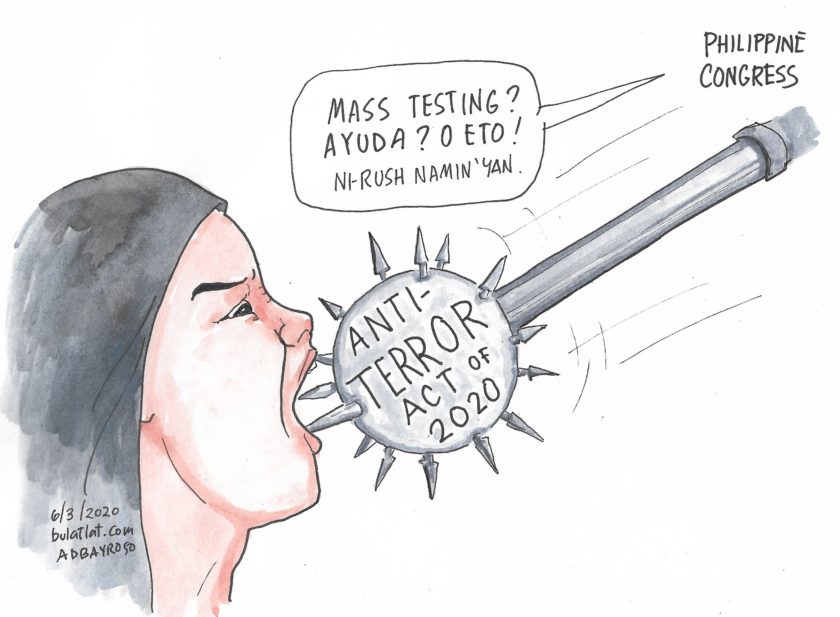 Authors of the anti-terror bill have been trying to defend the proposed measure amid wide condemnation from various groups and individuals.

A senator quipped, “Terrorists or their supporters are the only ones who will be afraid of the bill.”

Do we have the reason to believe the senator accused of plagiarism and apparently oblivious to facts?

Due to local protests and international pressure, the DOJ later reduced the list to eight.

Under the anti-terror bill, the DOJ, with the authority of the Anti-Terror Council and upon the recommendation of National Intelligence Coordinating Agency (NICA), may file an application to designate any group as terrorist. The Court of Appeals only needs to establish probable cause before issuing preliminary order of proscription within 72 hours from the filing of the said application. This means that an individual or group may initially be declared terrorist without being afforded due process. Human rights lawyers pointed out that probable cause is a relatively low standard of proof considering the grave implications of such a judicial order.

Worse, the summary hearing accorded to the respondent group may be held as far back as six months later. In a span of six months, the suspected terrorist may be subjected to surveillance, arrested and detained, and his or her assets frozen.

Who have been declared “communist-terrorists” by state security forces and the National Task Force to End the Local Communist Armed Conflict? Practically all sectoral organizations advocating for reforms and genuine change. They did not spread terror or cause panic among the public but called on the government to act on legitimate demands of ordinary citizens.

The massive arrests of so-called “quarantine violators” gave us a picture of what might be interpreted as terrorist act. The social media posts of public school teacher Ronnel Mas and of Cebu-based artist Maria Victoria Beltran, for example, may qualify as “terrorist.”

This brings us to the statement of Presidential Spokesperson Harry Roque that critics are “over-interpreting.” Roque said that the Bill of Rights will remain protected by the Constitution.

Again, the last time we checked, free press and free expression are among the rights guaranteed by the Constitution. Still, netizens who posted their criticisms via social media were harassed, intimidated and slapped with ridiculous charges. Just recently, six jeepney drivers were arrested for simply wanting to resume operations so they could feed their families. Yesterday, students and activists who voiced out their opposition to the bill were hounded by heavily armed police forces inside UP Cebu. Seven of them were arrested and detained.

Sen. Panfilo Lacson, main author of Senate Bill No. 1083, or the Anti-Terrorism Act of 2020, claimed that there’s enough safeguards in the law so no one could misuse it.

Lacson said that they’re “duty-bound” to make laws that would meet “international standards” and “fulfill state obligations with the United Nations.”

In the recent report on the Philippines, the UN High Commissioner for Human Rights described as “worrying” the proposed measure.

“The proposed 2020 Anti-Terrorism Act, slated to replace the already problematic Human Security Act, dilutes human rights safeguards, broadens the definition of terrorism and expands the period of detention without warrant from three to 14 days, extendable by another 10 days. The vague definitions in the Anti-Terrorism Act may violate the principle of legality,” the UN report read.

Contrary to Lacson’s claims, the bill deletes in entirety the strongest deterrent for abuses stated in the Human Security Act of 2007. Section 50 of the HSA states, “A person acquitted of charges of terrorism is entitled to damages in the amount of P500,000 for every day of detention without a warrant.”

Two indigenous peoples and one farmer were proven to be wrongfully charged with violation of the HSA, according to the monitoring of human rights alliance Karapatan. Aeta peasant Edgar Candule was detained for more than two years before the court dismissed the charges against him in October 2010. Lumad leader Jomorito Goaynon and peasant organizer Ireneo Udarbe, meanwhile, were arrested on January 28, 2019 and charged with violations of the HSA, among other fabricated cases. The charges were dismissed in August of the same year but Goaynon, remains in detention for trumped-up charges of kidnapping, robbery and arson.

No. We are not “epal” (attention-seeker) and “misinformed” for calling for the junking of the bill that would authorize state-sponsored terrorism.

In the context of growing discontent over how the Duterte administration handles the COVID-19 crisis, it is clear that the tyrant in Malacañang and his minions are afraid of the people’s rage.