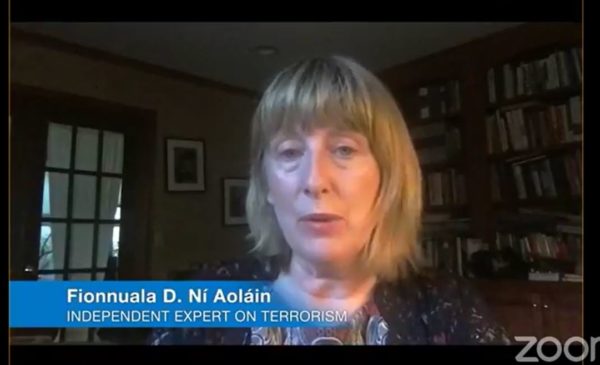 In a webinar on June 26 organized by Ecumenical Voice for Peace and Human Rights in the Philippines and other international human rights groups, Fionnuala D. Ni Aolain, Special Rapporteur on the promotion and protection of human rights and fundamental freedoms while countering terrorism expressed concern on the proposed law and cited specific provisions that she said go beyond the ambit of international law.

The Philippines is a signatory to the international laws protecting human rights such as the Universal Declaration of Human Rights, among others.

Aolain finds it concerning that an anti-terrorism legislation has emerged in the Philippines amid the present health crisis when, she said, “the regular process, oversight engagement, scrutiny and accountability are often limited and the capacity of the people to engage with the making of the legislation that have serious human rights implications is obviously limited.”

Aolain said globally, there is what she called as an “epidemic” of counter terrorism measures. These measures that are supposed to counter terrorism, she said, have been abused by many governments.

“My mandate has made clear that terrorism is a real and a challenging problem for many States. But advancing and responding to terrorism cannot be done in a way which is not human rights compliant because neither is efficient nor effective in the long run,” she said.

“Security and human rights are not at odds with each other. In fact they are bound together and only when we fully observed human rights will we be capable of fully making society secure in a way that respects the inherent dignity of each single person,” she added.

‘Definition of terrorism is broad’

Aolain cited her concerns on the Anti-Terrorism Act of 2020 which, only two weeks from now, will lapse into law should Duterte not decide on it anytime soon.

For Aolain, the definition of terrorism under the Anti-Terrorism Act of 2020 is “broad vague, lacks legal certainty and precision creating a challenge for individuals to understand precisely what kinds of actions would be designated as terrorism.”

She added that it is susceptible to abuse and compromise a number of fundamental rights under the International Covenant of Civil and Political Rights (ICCPR) and the Universal Declaration of Human Rights (UDHR).

She also found it concerning that the law will be implemented by the Anti-Terrorism Council which consists of members of the Cabinet appointed by the President, will be given the authority to enforce, arrest and designation of individuals as terrorist without the judicial warrant. “This is a fundamental encroachment on the most primordial of due process rights,” she said.

“It is also clear that persons who will be designated and arrested under the bill may face lengthy period of time in detention without due process. Such arrest gives rise to the concerns of arbitrary detention,” she added.

She also specifically mentioned Sections 12 and 13  which she said will affect the people’s access to humanitarian assistance, “which is an indispensable mechanism to protect other fundamental rights including social, economic and political rights.”

Section 12 of the Anti-Terrorism Act of 2020 states that “Any person who provides material support to any terrorist individuals or terrorist organization, association or group of persons committing any the acts under Section 4, hereof, or knowing that such individual or organization, association or group of persons is committing or planning to commit such acts, shall be liable as principal to any and all terrorist activities committed by said individuals or organizations, in addition to other criminal liabilities he/she or they may have incurred in relation thereto.

“There are grave concerns about the breadth and the scope of the terms ‘terrorism,’ ‘terrorist’ and ‘terrorist activities’ as used in the legislation. They are certainly broader than the model definition of terrorism that has been advanced by my mandate through my predecessors over almost 20 years. The definition also seem inconsistent with UN Security Council resolution 1566 which provides a narrow and degrade definition of terrorism,” Aolain said.

Aolain also cited Section 9 of the proposed law, which punishes a person with 12 years imprisonment, even without taking any direct part of the supposed terrorism. She said the acts under this section which prohibit inciting others to commit terrorism by means of speeches, proclamations, writing, emblems, banners or other representations will have an implication on the freedom of expression.

Aolain stressed that this has nothing to do with the exhortation of terrorism.

“May I remind the government that the HRC has made clear that prohibitions on things like encouragement, praising and glorification have to adhere to the requirements of Article 19.3 of the ICCPR. I am concerned that provisions in this law go far beyond that and will have a negative effect on freedom of expression in the Philippines,” she said.

She said that freedom of expression in a democracy is one of the most substantial and meaningful of rights. “It is what distinguishes the democracy from all other forms of governments allowing people to speak even speech that we may disagree with,” she added.

Aolain also underscored the detention without judicial warrant as against the requirements of Article 9 of the ICCPR which, for one, states that “everyone has the right to liberty and security of person. No one shall be subjected to arbitrary arrest or detention. No one shall be deprived of his liberty except on such grounds and in accordance with such procedure as are established by law.”

Under Section 29 of the Anti-Terrorism Act of 2020, a person who is only suspected of committing terrorist act will be detained up to a maximum of 24 days.

Aolain pointed out that people are not more secure and more free with coming up with a legislation which impinges human rights in the name of countering terrorism. She said that governments should advance human rights and ensure that any security legislation is “consistent with the States’ obligations on international law and seek to do the best to promote those values rather than undermine them.”