Vic and I have known Amanda Lacaba Echanis since childhood when she was also detained at Camp Crame with her parents, Randall and Linda, who were arrested ahead of us in August 1990. She was maybe around 2. We called her Tata until she decided sometime in her teenage years to be called by the more serious-sounding Amanda.

Tiny, with doleful eyes, which seemed too big and old for her, baby Amanda maybe saw more than we did. I remember we would all laugh whenever she blurted out the individual owners of all the water pails and water jugs (for drinking water) lined up every morning in front of the gripo in the open area outside the common kitchen. She could also identify all the clothes hanging up to dry per owner.

During that time, political prisoners could wear any color of shirt unlike today’s prescribed yellow (under trial) and orange (convicted). Couples arrested could also stay together until the wife was usually released ahead of the husband to allow her to attend to their family and her imprisoned husband. 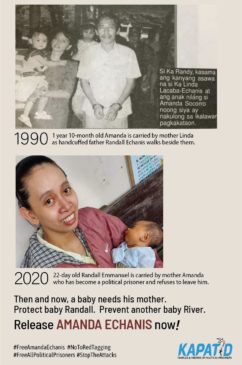 Randy and Linda had their own kubol, strung up with cloth to provide some privacy while Linda breastfed Amanda and put her to sleep. After 6 months, Linda was released, way ahead of Randy. And she joined me, Josie (wife of Rudy Salas), Nymia (wife of Al Simbulan), Lu (wife of Raffy Baylosis) in KAPATID to work for the release of our husbands and all political prisoners.

It didn’t surprise me when bright, gentle Amanda passed the highly competitive exam for the Philippine High School for the Arts and then UP Diliman, and scripted a whole play about feisty Nanay Mameng, urban poor leader Carmen Deunida. I learned she could also paint and write poetry, a true Renaissance talent maybe owing to her illustrious genes.

Martyred poet-warrior Emmanuel Lacaba is her uncle, and so is writer-for-all-seasons Pete Lacaba, and Collegian colleague Billy Lacaba, all brothers of Linda. And of course, there’s martyred Randall whose contributions to the anakpawis movement outlive him.

Next I learned, as if following the footsteps of her father, Amanda was in Cagayan, working with the peasant women’s group Amihan.

But on December 2, the youngest political prisoner in our time became a political prisoner herself. Amanda was arrested in Baggao, Cagayan in a police crackdown on activist organizations in the province. She was foisted with firearms and explosives, just like Vic and so many other activists to deny them the right to bail and criminalize them.

She is also a first-time mother of a baby boy named Randall Emmanuel in honor of his double lineage of activist service. Just 22 days old, child and mother need to be kept together to prevent the government folly of another baby River who was torn apart, one-month old, from his mother, detained activist Reina Mae Nasino, while being breastfed.

Linda is also back now with me in KAPATID—as Linda should have been in August had Randy not been salvaged by the savages. But there is courage in sadness as our collective story about the past and present tense unfolds with new headings: Pushback, Fightback.