You Are Here: Home → 2021 → March → 7 → Mimi Doringo and how the struggle for urban poor rights answered her searching questions 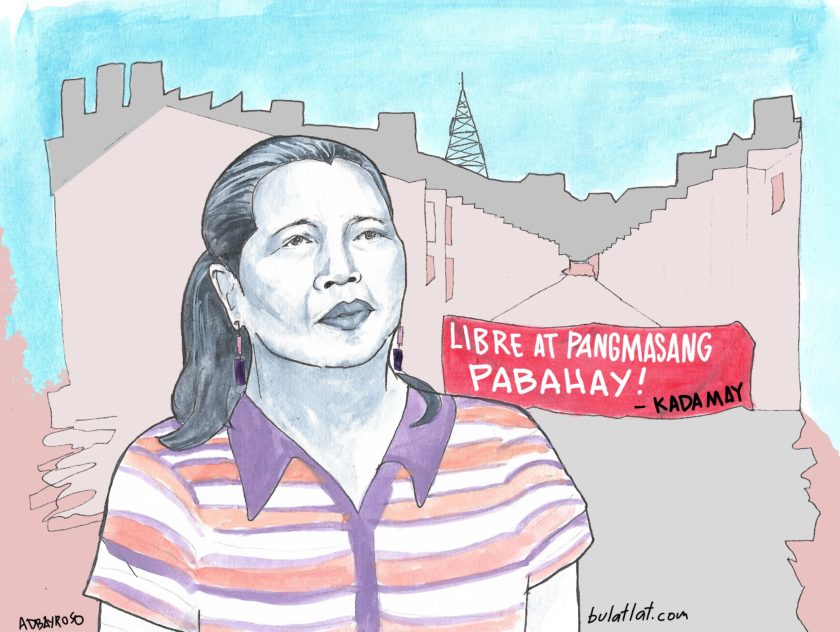 The order prohibiting her from entering the town stemmed from a protest action, which local authorities barred. This left Doringo, secretary general of urban poor group Kadamay, no choice but to assert their rights to gather and seek redress from the government due to its slow and wanting social protection amid the pandemic.

“It was very infuriating. I wanted to go to Pandi immediately as soon as I heard it,” Doringo told Bulatlat in a phone interview.

The Bulacan town became controversial when homeless Filipino families occupied abandoned government houses originally intended for state forces and their families. This after a series of dialogues with concerned government agencies proved to be futile.

President Duterte initially allowed the occupation, promising police officers and soldiers a better housing project. Later on, he gave a deadly warning to Kadamay members to either be truncheoned or be shot killed if they fight back should they hold another housing occupation.

Still, urban poor rights advocates consider this a victory, with their right to decent housing long ignored by the Philippine government. Harassments, however, continued with the increased military presence in their community and the vilification campaign against Kadamay’s leaders and members. Doringo, its national secretary general, was not spared.

For 13 years, Doringo worked for a local cosmetic company. Soon, the company began to hire contractual workers through employment agencies. Regular workers like Doringo were repeatedly questioned for reporting to work late, and were being asked for ludicrous requirements to secure payment for their work during the holidays.

One time, Doringo and her co-workers went on a sit-down strike after the company forced them to work on a holiday. When their bosses approached them, none of her co-workers wanted to speak out. It was Doringo that did, as assertive as possible, though deep inside she was really daunted.

“Even then, I could already sense ‘something’ in me,” she recalled, referring to her flair of standing up for what is right, “But I never knew it would lead to this.”

When the time came – when all of her patience has proverbially dried up – Doringo resigned from work, no matter how difficult it was for her. After all, it kept the family afloat, with her husband also working for the same cosmetic company.

“I thought that perhaps it was now time for me to personally look after my kids since my sibling has been taking care of them,” she said.

In 2009, Doringo’s home near the Tullahan River in Quezon City was completely destroyed due to the onslaught of Typhoon Ondoy (international name Ketsana), hitting the Philippine capital, killing nearly a thousand people, and leaving $1.15 billion in damages. They ended up renting near where their house used to be.

Five years later, they faced demolition threats and residents were offered a relocation site in Camarin, Caloocan, a city in the northern part of Metro Manila. She thought of waiting for another relocation opportunity, hoping to get one in Bulacan because of the house and lot package offer, instead of getting a unit in a tenement. They, however, were rushed into agreeing, as they were told they only have 30 days before the demolition team comes knocking on their doors.

“I wanted to save our lives, the children most especially. We could not afford to be always be living in a precarious situation,” she said, accepting the relocation offer.

Their family was assigned to the second floor of the tenement, where they will pay $18 a month and a monthly maintenance fee of $6. The amortization seemed low, Doringo said, but with her husband as the sole breadwinner, working then in a carton factory with a salary of $6 per day, they could hardly afford it.

Apart from the amortization, they also decried the high water rates and the guessing game it took to know how much their electricity bill was. If the unit does not have a refrigerator and washing machine, they had to pay $16, and if it has $32. This is a far cry from their monthly six-dollar electricity bill in their Tullahan home.

Doringo said despite the initial setbacks and disappointments, she was optimistic in the new lease on life that the relocation offered for them.

Doringo remembered how the community’s young people would pester them as they chase after them during curfew hours. Some would throw water bombs at them, laughing and running away from them in the tenement corridors. But it was still a friendly banter, she recalled.

“We did not have a formal neighborhood association. But I was already volunteering to keep the tenement safe and sound. We were committed to keeping it that way,” she said.

But as Doringo became more adamant about pushing for their rights, the threats and vilification against her became more serious. Baseless accusations that were hurled at her were far more painful and worrying than a bunch of water bombs.

They then began to ask around and looked for people who can help answer their searching questions. A neighbor said their workers’ union is affiliated with the Center for Trade Union and Human Rights. They met a labor organizer and the questions were slowly being answered. Doringo said that having studied their rights and how to assert them made her more confident in negotiating for their welfare.

One time, residents questioned the planned increase for the maintenance fee, from $6 to $9 per housing unit. The National Housing Authority held a public assembly, where residents got the opportunity to look into the maintenance budget of the tenement. Instead of just opposing the increase, residents were able to further lower the maintenance fee to $2. This after they asked the government housing agency to name the supposed “building administrators” and “security guards” who were set to receive salaries ranging from $308 to $1,028.

“They could not name the building administrator, so they had to strike it from the maintenance budget. We also questioned why they had to employ two security guards when residents have already been volunteering to keep the tenement’s peace and order,” she said.

This made Doringo earn the ire of the government’s housing agency. “Where did their guts come from?” they were quoted as saying.

Doringo said the vilification against her then started. She was declared unqualified to run for the housing association over a technicality and later got the news that NHA officials were telling new relocatees to not speak or engage with Doringo as she was a cause of trouble in the tenement.

Now a Kadamay leader, attempts to vilify Doringo in many communities they are working with continue to intensify. This, however, did not stop her from organizing and educating her fellow urban poor – seeing in their naive eyes the same searching questions she had when she began her struggle for her family and community’s rights and welfare.

Being busy with organizing work has initially put a strain in her family life. Her husband was at first reluctant with her work as an activist, and one of her children said she is not spending as much time with them. But Doringo eventually overcame this as she tirelessly explained to them her advocacies.

“Our family is so poor there were moments we would sleep with nothing but a grumbling stomach. At times, we would buy one-peso potato chips from a nearby store so we would have viand. And many families are experiencing this,” she said, “This has to stop. As a mother, this cycle should no longer be passed on to our children.”

During the pandemic, Doringo and the rest of the Kadamay leaders and members did not stop from providing much-needed assistance to the communities they are working with. They held protest actions to demand immediate and due social protection for the poor, especially with the growing number of displaced workers among their ranks. They also led community kitchens that provided warm meals, no matter how simple, to the urban poor.

Described as a very motherly colleague with a knack for showbiz news, Doringo said she is here to stay.