You Are Here: Home → 2021 → March → 11 → Manny Asuncion: A worker who embraced the bigger fight for social justice

Manny Asuncion: A worker who embraced the bigger fight for social justice

SANTA CRUZ, Laguna — Activists use the term ‘ka’, short for ‘kasama’ (comrade), as a term of endearment and a sign of respect to those who willingly took on the road less travelled. For his comrades in the Southern Tagalog region, Emmanuel Asuncion was more than just ‘Ka Manny’; he was a father of struggle in Cavite.

Those who knew him will say the same: he was always full of insight. He always had something to share during meetings, and you would be hard-pressed to try and stop him.

He was the same during mobilizations. He would apologize to anybody inconvenienced by the noise, and thank those who took the time to listen to him. But he would never allow anybody to silence him, and the advocacies he brought with him.

Manny Asuncion was the very definition of an organizer: patient with the masses, always willing to serve the people, and filled with righteous anger against injustice.

Life in the struggle

Ka Manny was a worker before he was an activist. In 1998, he worked at a Taiwanese company in the Cavite Export Processing Zone as a machine operator when he and 17 others were laid off due to a machine error.

They decided to pursue the case. The difficulties of legal struggle, however, soon took a toll on the workers and before long, Ka Manny realized that he was the only one left trying to seek justice over their illegal dismissal.

Enter Father Joe Dizon, veteran activist and founder of the Workers’ Assistance Center in Dasmariñas, Cavite. The late priest and WAC helped Ka Manny in their case, which dragged on for years before they were able to get financial compensation.

This was Ka Manny’s turning point. Through Fr. Dizon, he realized that beyond his case, there was an entire class of workers exploited by those in power, and that like him, they too needed help. Ka Manny decided to embrace service to the people and became a full-time activist.

Since then Ka Manny was true to the cause. He advocated for a P750 minimum wage to meet the increasing cost of living while fighting for workers’ rights as part of the Solidarity of Cavite Workers. He became the provincial coordinator for Bayan Muna and eventually, coordinator for Bagong Alyansang Makabayan in Cavite.

During that time, he never grew tired fighting for the rights of his fellow Caviteños. He was deeply involved in issues concerning the jeepney phaseout, reclamation efforts in Bacoor, land disputes in Lupang Ramos and Silang, and everything else in between.

Ka Manny’s activism did not come without hardship. His family was slow to accept his decision to become a full-time activist. His wife, Liezl, sometimes thought he was spending less and less time with her and their children.

But some hardships are tougher than others. In 2007, he was one of the 72 activists charged with multiple frustrated murder in an attempt to silence the mass movement in the Southern Tagalog region. But Ka Manny kept going.

These, and other arrests and killings, were what kept Ka Manny going. He had seen some of the worst that Cavite had to offer – the brutal slay of Merly Valguna and Rodora Mallari, who fought against the privatization of the Trece Martires wet-and-dry market; the slay of nine farmers in Lumil, Silang; the repeated arson incidents plaguing communities in Bacoor, and so many other pages during his time serving the people. 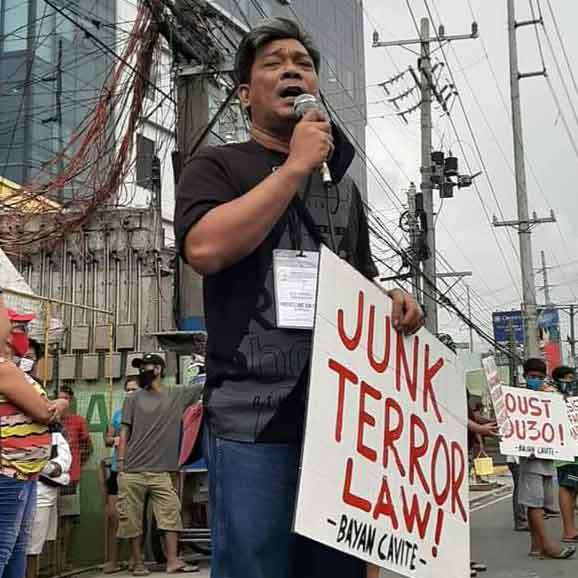 The fight for freedom

Manny Asuncion met his end on the early hours of March 7, 2021, inside the same office where he began his journey into activism. Police officers from Bay, Laguna entered the premises and dragged Liezl and a witness outside. They pushed Ka Manny to the ground and taped his mouth before shooting him multiple times.

Police reports claim that they were attempting to “serve” a search warrant when Ka Manny “fought back.” The same story was heard in other provinces across the Southern Tagalog region, which saw the brutal deaths of eight others.

His last words were “We’re people too.”

Ka Manny might be dead, but for activists and comrades, it is not their bodies that determine life, but the ideas that they carry within them. As they say, one can kill the freedom fighter, but never the fight for freedom.

The youth will finish what he started.