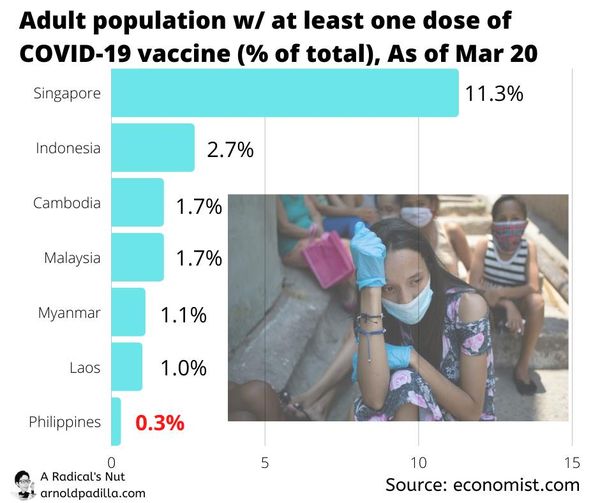 But what is even more alarming for Filipinos is that amid the surge in new COVID-19 cases, the response of the Duterte government to the pandemic more than a year into the crisis remains grossly inadequate and incompetent. While implementing the strictest and longest lockdown in the region, the Philippines continues to lag behind our neighbors in Southeast Asia in actually responding to the pandemic.

We are lagging behind even the poorest countries in Southeast Asia. The Philippine economy is about 14 times the size of the Cambodian economy but the latter is providing six times the number of vaccinations per 100,000 people than the Philippines.

As of today, only 0.3% of the Philippine adult population has at least one dose of COVID-19 vaccine – the worst among Southeast Asian countries with high levels of cases. Poorer neighbors like Cambodia, Myanmar and Laos have even much better vaccination numbers.