You Are Here: Home → 2021 → May → 23 → Can SC magistrates ‘seek the right balance’? A second look at the highlights of the oral arguments on the PH terror law

Can SC magistrates ‘seek the right balance’? A second look at the highlights of the oral arguments on the PH terror law 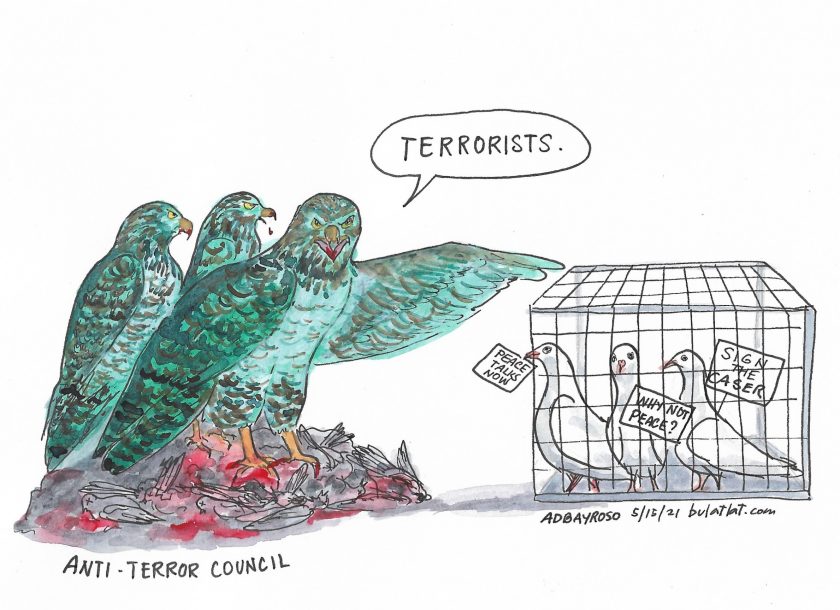 MANILA – All eyes are now on the Supreme Court, following the culmination of the oral arguments on the controversial Philippine terror law on Monday, May 17. Petitioners and respondents now prepare to submit their respective memoranda before it makes its historic decision.

On Monday, former Chief Justice Reynato Puno, who served as amicus curiae or friend of the court during the oral arguments, urged the high court’s magistrates to “seek the right balance” between individual liberties and national security. This as they gather their collective wisdom in deciding the most contested law before the Supreme Court in recent history.

In this report, Bulatlat looks back on the highlights of what went on during the nine oral arguments that spanned over four months.

1. Petitioners and issue of ‘direct injury’

All 37 petitioners questioned the constitutionality of the Anti-Terrorism Act of 2020 through a facial challenge. This is allowed if the measure being challenged is perceived to have violated free expression, which is an exception to the rule prohibiting third-party standing that enables any citizen to counter the proverbial chilling effect of overbroad and vague penal laws on protected speech.

During the first day of the oral arguments, Associate Justice Marvic Leonen raised the issue of ripeness of the petitions, suggesting it may be too early for the high court to intervene without a direct injury yet. For a facial challenge to be valid, he said petitioners must point out that those implementing the law will violate free speech.

The Office of the Solicitor General, through its head Jose Calida, described the petitions questioning the terror law as “frivolous” and called for its outright dismissal because there is no direct injury among petitioners. This was also echoed by another amicus curiae, former Supreme Court Justice Francis Jardeleza, when he questioned the legal standing of the petitioners.

Jardeleza, who called for the dismissal of the petitions, also stressed the doctrine of hierarchy of courts, even for cases that involve questions of constitutionality. This doctrine prevails, he said, regardless of the transcendental or paramount importance of the issues involved.

The petition of the two Aetas could have provided the proverbial cure to the issue of standing insofar as the need for direct injury is concerned. However, the Supreme Court dismissed their petition for intervention, citing the pending case before a local trial court in Olongapo City. How and why the OSG managed to have the Aetas retract their statement – though superseded by the high court’s dismissal of their petition for intervention – deserves a separate report.

Still, petitioners are resolute that this will fall under the facial challenge.

2. Anti-Terrorism Council and its unbridled powers

Petitioners brought to the Supreme Court’s attention the absolute power provided to the Anti-Terrorism Council, which has the power to designate individuals and organizations as terrorists and authorize the extended detention of up to 24 days. This, in the context of the rampant red-tagging, will put lives at risk.

Lawyer Evalyn Ursua said that red-tagging of activists, which has proven to have deadly results, will now be legal through the ATC’s absolute power of designation. Government lawyers, on the other hand, argued they prefer “truth-tagging” over red-tagging, claiming that the former is carefully studied and evidence-based.

During the oral arguments, however, Justice Amy Javier said that “though the term red-tagging is only popularized recently, this does not mean that the concept or the act of red-tagging is new.”

Last week, the ATC showed its teeth when it released a list of 19 individuals, which included members and publicly-known consultants of the National Democratic Front of the Philippines’ Negotiating Peace Panel, designating them as “terrorists.” The ATC order, however, neither presented evidence nor grounds on how they arrived at the designation.

During his speech as amicus curiae, Puno pointed out that the ATC is encroaching on judicial functions as they determine probable cause and the apparent secretive nature of how they will arrive at it.

These designated individuals will have no effective means for appeal or delisting under the terror law. While government lawyers said the law’s implementing rules and regulations have provided means for the delisting, Ursua said during the first oral arguments that ATC members can choose to ignore that.

Government lawyers, on the other hand, said designated individuals may appeal to the Office of the President. But this technical exhaustion of administrative remedies is illusory since the ATC is directly under it.

Read: ATC list is proof why Anti-Terror Law should be struck down – peace consultants

Peace consultant Rey Claro Casambre, one of those designated as a terrorist, said, “Nobody but nobody, my accusers included, believes I am a terrorist.”

3. Outside the protection of the law?

Petitioners argued that the terror law will deprive an individual to avail of judicial relief, with the executive encroaching on the judiciary’s power to issue warrants, and with Writs of Amparo and Habeas Data apparently rendered ineffective.

During the first oral arguments, Associate Justice Rosmari Carandang asked if lawmakers can allow detention longer than what the Revised Penal Code indicates. But lawmaker and lawyer Edcel Lagman, also a petitioner, said the Congress cannot pass a law against terrorism by derogating civil liberties and the Constitution.

The Philippine Constitution stipulates that a person may be detained without charges up to three days even under a situation so grave as rebellion or invasion that it will compel the suspension of the privilege of habeas corpus. As such, petitioners argued that such a maximum period has extraordinary applicability and should not apply or much less surpassed as the government supposedly combats terrorism.

While government lawyers argued that there are enough safeguards in the law, Justice Amy Lazaro-Javier noted during her interpellation that the terror law did not indicate standards on how to ascertain the number of days one will be detained under the authority of the ATC.

Worse, government lawyers admitted that a person facing illegal possession of firearms charges alone may still be subject of the ATC’s written authority for continued detention, “deeming it necessary to prevent the commission of graver crime of terrorism. To this, Justice Estela Perlas-Bernabe said is “very dangerous.”

Most political prisoners in the country are charged with illegal possession of firearms and of explosives. They have also decried planting of evidence in midnight raids, which some resulted in illegal arrests and killings as seen in the infamous “Bloody Sunday.” 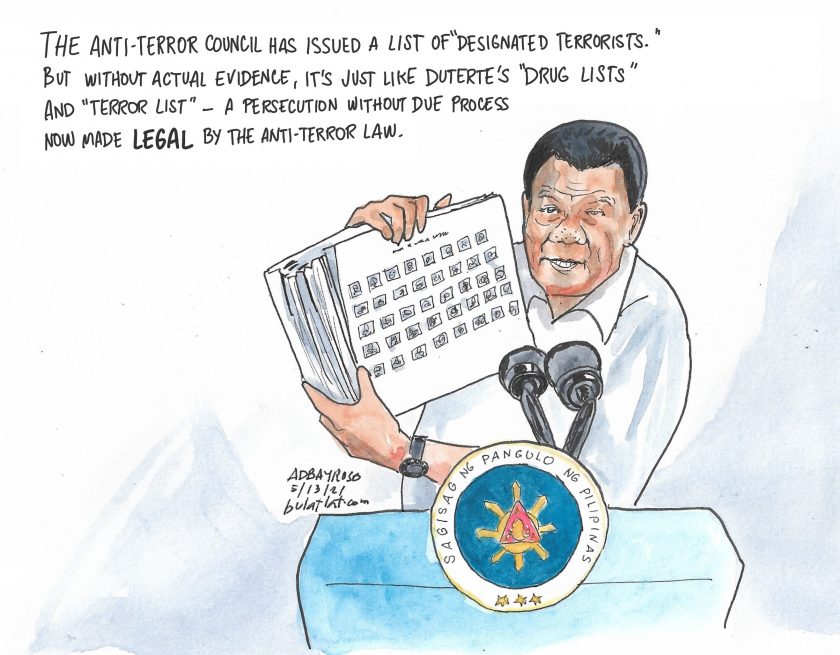 For many parts of the oral arguments, individual liberties and national security were pitted against each other. But for the lawyers of one of the petitioners, Jose Manuel Diokno, the law is beyond help for its vagueness.

Diokno argued that the operative word in the new terror law is the punishing of one’s intent, which, he added, must not be criminalized for as long as one does not cross the line. However, much of the determination of one’s intent and if it has violated the terror law will be left to the sole discretion of law enforcers.

Government lawyers have argued that without the new law on terrorism, the country will be powerless and paralyzed to suppress or prevent acts of terror. Calida said the Philippines will also be put on the gray list internationally on its combat against terrorism.

But petitioners argued that good policing and intelligence work is enough to fight terrorism. Nothing will happen without these, said Neri Colmenares during the fourth oral arguments on March 2.

Former Chief Justice Puno said magistrates can seek the balance and ensure that the new normal will take into account checks and balances and the inviolability of human rights in the midst of radical steps that the government must take in its fight.

The balance, he added, should neither reduce individual rights to insignificance nor of national security. The idea is for “people to be both safe and free.”

5. The poor, marginalized are likely to dissent

Calida, in his opening speech, quoted President Duterte as saying, “there is nothing to be afraid of if you are not a terrorist.” But petitioners have pointed out that the real target of this terror law are activists and perceived dissenters who criticize or oppose government policies.

“Your Honors, in the real world out there, who are the targets of this deprivation of rights? The law targets an ascertainable group of activists and perceived dissenters who have been the victims of red-tagging and terrorist tagging by the mere claim that they are “suspected persons,” lawyer and petitioner Colmenares said in his opening statement.

During the May 12 oral arguments, Justice Leonen pointed out that people differ due to class, profession, educational attainment, to name a few. These translate to their ability to voice out their redress, their access or the lack of it to platforms for their freedom of expression, and the chilling effect on them that may hinder them from seeking redress.

“When we say chilling effect on people, the court has to be clear, the petitioners has to be clear and demonstrate which aspect of that concept of people will actually be affected with the chilling effect. Without that clear demonstration as to what aspect that is, then we are unable to see whether it is really true that the chill will lead to a stifling of their ability to participate as a sovereign,” Leonen said.

As such, when the law is vague enough to punish advocacy, there can be chilling effect on a person waiting for the clock to strike 5 o’clock in the morning to line up for food in a community pantry, he added.