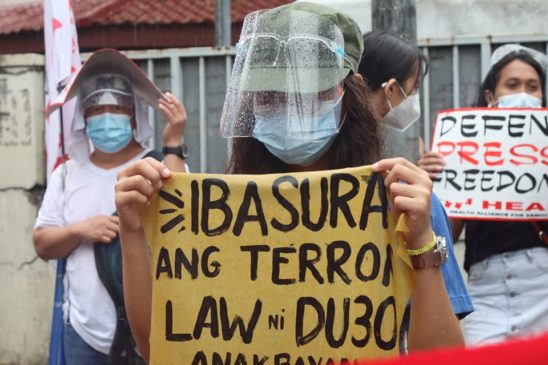 Jose Manuel Diokno argued that intent, for as long as it does not cross the line, should not be criminalized. He added that the provision punishes the exercise of civil and political rights, which, for as long as it is peaceful, should be protected.

Associate Justice Alexander Gesmundo said the definition of terrorism under the Philippine terror law and that of the European Union and Australia are almost the same. However, lawyer Jose Manuel Diokno argued that the operative word in the new local terror law is punishing one’s “intent.”

Republic Act 11479 defines terrorism in its Section 4 as a crime committed by a person who engages in acts intended to cause death or damage, to name a few, when the purpose, by its nature and context, is to intimidate the public, create an atmosphere of fear, or provoke influence by intimidation.

In this week’s oral argument, Diokno argued that intent, for as long as it does not cross the line, should not be criminalized. He added that the provision punishes the exercise of civil and political rights, which, for as long as it is peaceful, should be protected.

Among the other issues that were raised today is the prolonged and arbitrary detention of a person even without charges.

Under the Philippine Constitution, a situation that is so grave that will compel the lifting of the habeas corpus already states that a person may only be detained without charges up to three days. Human rights lawyer Neri Colmenares said that under normal circumstances, the same should also apply.

Responding to queries of Justice Hernando, Diokno also shared the same sentiment, saying that neighboring countries that allow more number of days for detention without charges may be valid under their respective constitutions.

Last week, lawyers of the petitioners highlighted how the controversial law will bring more more harm than what it purportedly promises to do. Lawyers, too, cited how petitioners themselves have been red-tagged and subjected to various threats, including that of the Facebook post of Gen. Antonio Parlade Jr., spokesperson of the government anti-insurgency body.

In the morning of the first oral argument, the two Aetas who were tortured to admitting they are members of the New People’s Army last year also filed a petition to intervene before the high court, asking the magistrates to consider their plight and declare the terror law as unconstitutional.

The case of the two Aetas, both were charged for violating the terror law, is the first petition with direct injury as the other 37 petitions were filed prior to their arrest, torture, and detention. However, during the second oral arguments, Chief Justice Peralta announced that the petition for intervention has been denied.

The Philippine terror law remains as one of the most contested law before the Supreme Court, with now 37 petitioners asking the high court to declare it unconstitutional.

Next oral argument is set on Feb. 16, Tuesday.