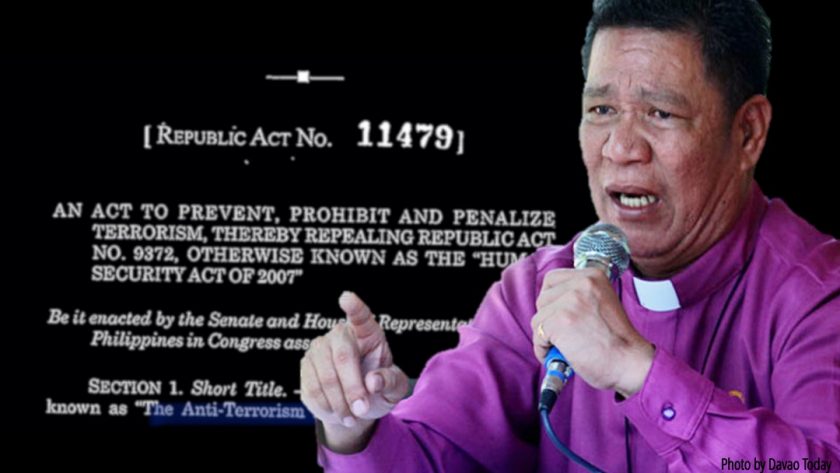 MANILA – “With a little over P72,000 ($1,447) in the bank, how in the world can the United Churches of Christ in the Philippines finance terrorism?”

This was the question posed by UCCP Bishop Hamuel Tequis in an online forum organized by human rights groups Karapatan and EcuVoice Philippines on July 6, a year since the enactment of the Anti Terrorism Act of 2020.

Critics of this law have long assailed that it will be used to silence dissent. A year on, progressives said the law has left bank accounts of non-profit and advocacy organizations and political prisoners frozen on allegations that they are financing or supporting terrorism.

The Philippine News Agency (PNA) said in a report that the Anti-Money Laundering Council order covered a bank account that purportedly contains $12,000 but Bishop Tequis maintained that they only have P72,000 ($1,447) in their bank account.

This recent attack on the UCCP Haran has affected their work and their advocacy as they have been providing sanctuary to displaced Lumad. Even before the terror law was passed, they have been experiencing harassment and red-tagging.

Under the Duterte presidency, 10 UCCP members have been arrested and charged with trumped up charges. According to Tequis, most of the cases filed ar child abuse, violations of the international humanitarian law, human trafficking – all in relation to their assistance to Lumad refugees.

“As church people, even though there are many attacks, we are very sincere and committed to serve our Lumad peoples because this is the mandate of our service as God entrusted to us,” Tequis said.

Programs for women farmers have also been affected with the freezing of Amihan’s bank account.

Amihan Secretary General Cathy Estavillo said the freezing of their account stemmed from testimonies of two alleged rebel surrenderees claiming their organization is financing the Communist Party of the Philippines (CPP) and the New People’s Army (NPA).

Government witnesses also alleged that Amihan has bank accounts in Rizal Commercial Banking Corporation (RCBC) and the Banco de Oro Unibank (BDO). Estavillo said they do not own the bank accounts mentioned.

“This resulted in the halting of our project. We struggle with the administrative side of our work. They have deprived us of our right to receive donations for our programs,” she said.

In December 2019, bank accounts of Rural Missionaries of the Philippines (RMP) were also frozen by the AMLC.

The NGOs decried that the AMLC’s orders were arbitrary, and they were denied the right to refute the serious allegations.

Bank accounts of detained peace consultants – both of whom were designated as terrorists by the ATC – have also been frozen.

Fides Lim, wife of detained peace consultant Vic Ladlad, said that the frozen bank account contained the compensation her husband received as a victim of human rights abuses, per Republic Act No. 10368 or the Human Rights Victims Reparation and Recognition Act of 2013.

It also included the compensation from lawyer Robert Swift, which Ladlad received in August 2019 from human rights class suits in reparation for his political imprisonment and torture during martial law, and for the abduction and enforced disappearance of his first wife Leticia Pascual Ladlad in November 1975.

During the online forum, Lim said “domestic mechanisms are not holding up anymore in the Philippines when military-led councils like the Anti-Terrorism Council serve as judge, jury, and jailer.”

Another peace consultant whose bank accounts were frozen is Rey Casambre. His daughter Xandra Bisenio lamented that the freezing of his father’s bank accounts deprives them of access to funds that they use for the essential needs of his father, especially during the pandemic.

Bisenio earlier said that the bank accounts were accumulated savings from his father’s living allowance from the Philippine Peace Center, a non-government organization where he serves as executive director, as well as from his wife’s savings as a researcher-translator for the past three decades.

Since the passing of the terror law, Estavillo said farmers continue to be red-tagged and charged with trumped-up cases. Their names and photos are printed and posted in public vicinities, alleging them as recruiters and leaders of the NPA.

She found it unacceptable that instead of heeding their demands for aid, the government has answered with “heightened harassment, killings, arrests and filing of trumped up cases, and even abduction.”

Lim said the terror law has left a feeling of dread, “a permanent state for every activist and their family because of the regime that just declared a total war on activism.”

“For us families, the psychosocial burden is aggravated by the pandemic since we cannot visit from March since last year while political prisoners face constant threat not only from Covid but the machinations of the NTC-ELCAC,” said Lim. (JJE, RVO)