With President Duterte down to his last months in office, community health advocates say health spending is an election issue that must be addressed – a first step in undoing the sorry state of the country’s public health care under an administration that won with a promise of tapang at malasakit.

Reforms in the long-running problems of the country’s public health system were among Duterte’s many election promises. He vowed, for example, to prioritize health in the national budget in such a way that when “a person enters, [there is a] need to help them, cure them, operate on them, [he] will pay.”

However, the health sector suffered from massive budget cuts and Filipinos are increasingly dying from preventable diseases as public health care remains elusive. Where is the Duterte administration’s so-called legacy?

“Funding has remained insufficient as he prefers funding PhilHealth instead of direct health services. We need to revisit the big problems in primary health care, and the increasing out-of-pocket expenses of many Filipinos,” San Pedro said.

During the presidential campaign in 2016, Duterte said that the government will shoulder health expenses of poor patients through PhilHealth reserve funds, sin tax revenues, and the health department’s budget.

However, the national budget on health has not improved under the Duterte administration, attributing the increase from salaries provided to health workers based on the Salary Standardization Law. 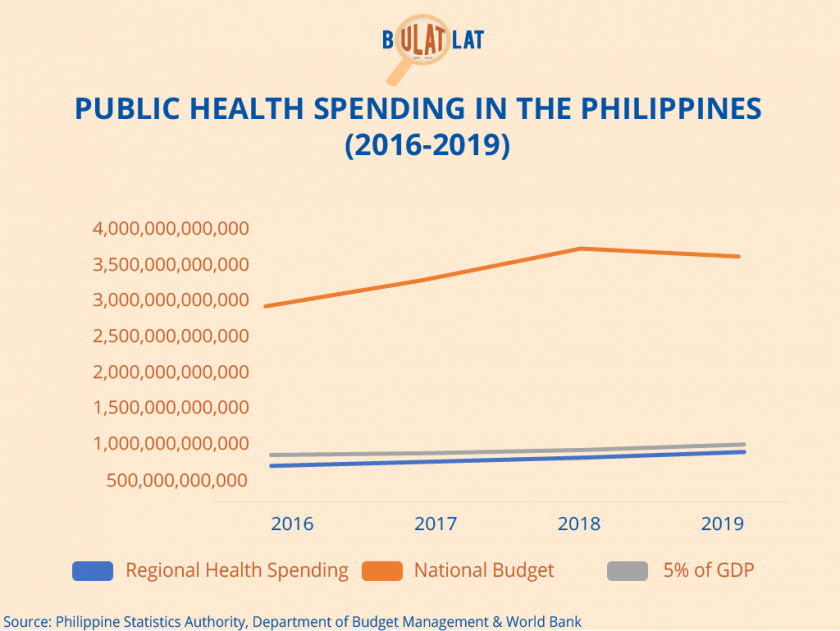 In 2021, the budget for the health department suffered a 14-percent cut, accounting for only 0.6 percent of the gross domestic product (GDP). This is far from the World Health Organization’s recommendation that five percent of the GDP be allocated for health.

Public health spending in the regions, of which funding and management of health facilities have long been devolved to local government units, did not improve and remained unequal. The National Capital Region (NCR) had a P134-billion health budget but poverty-stricken regions like the Bangsamoro Autonomous Region of Muslim Mindanao (BARMM) and Eastern Visayas were provided only P4.6 billion and P18.7 billion, respectively, in 2019.

Instead of funding direct health services, the Duterte administration chose to allocate $1.47 million this year to PhilHealth, the government’s health insurance, despite being under scrutiny for various anomalies even before the COVID-19 pandemic.

In 2019, the Philippine Statistics Authority said that 47.9 percent of health spending is covered by Filipino households as patients tend to shoulder the expenses for their medical needs. For COVID-19 patients, the government initially paid for their medical expenses but this was eventually replaced with “packages” that cover only 35 percent to 88 percent of hospital bills that can run up to millions of pesos.

Doctors, facilities lacking on the ground

The global pandemic exposed how ill-equipped the country’s public health system is, from inadequate facilities to the health workers’ poor working conditions. This has been attributed to the chronic understaffing of health workers.

From 2016 to 2019, data from the health department showed no significant changes in the number of public physicians hired by the Philippine government across all regions. 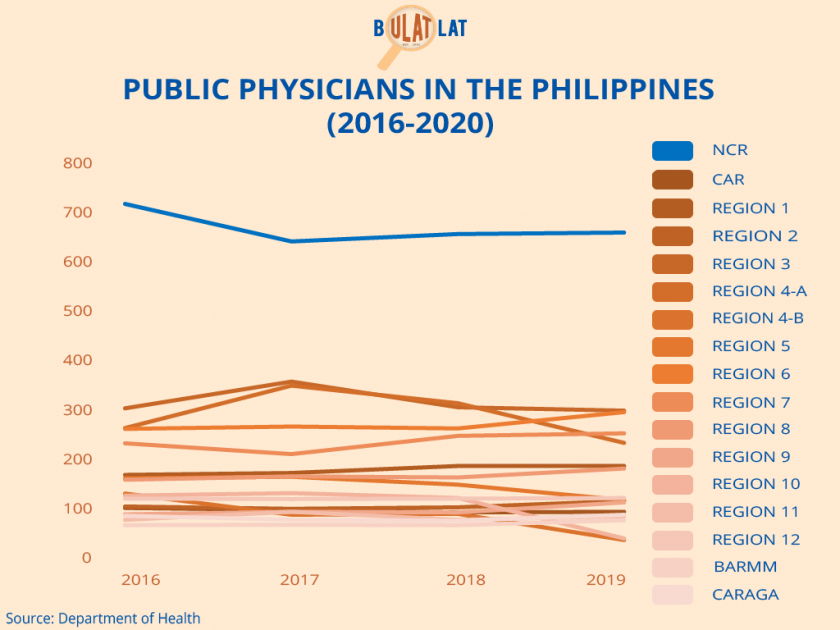 In the National Capital Region, where the top three richest cities (Makati, Quezon, Manila) are located, public health workers such as public doctors and medical technologists have the highest concentration. In 2019, at least 22 percent or almost a quarter of public doctors in the country are in the National Capital Region, while Region 4B and BARMM have a measly share of 1.2 and 2.9 percent, respectively.

Primary health care has also suffered under the present administration.

Nearly 20 percent of health facilities at the city, municipal and rural levels are also highly concentrated in the Philippine capital. 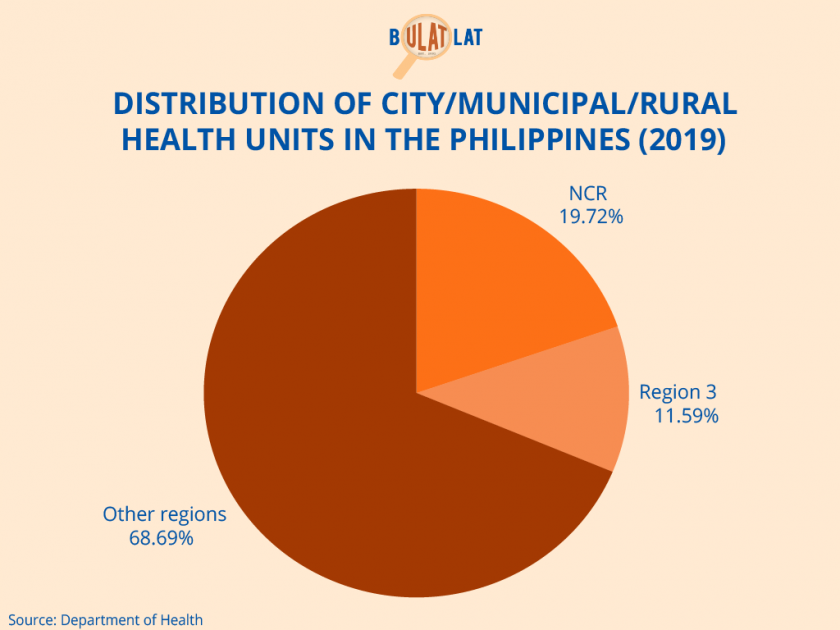 While dealing with a pandemic, the Philippines in 2020 recorded a higher number of deaths from preventable diseases, compared to the national average in recent years. 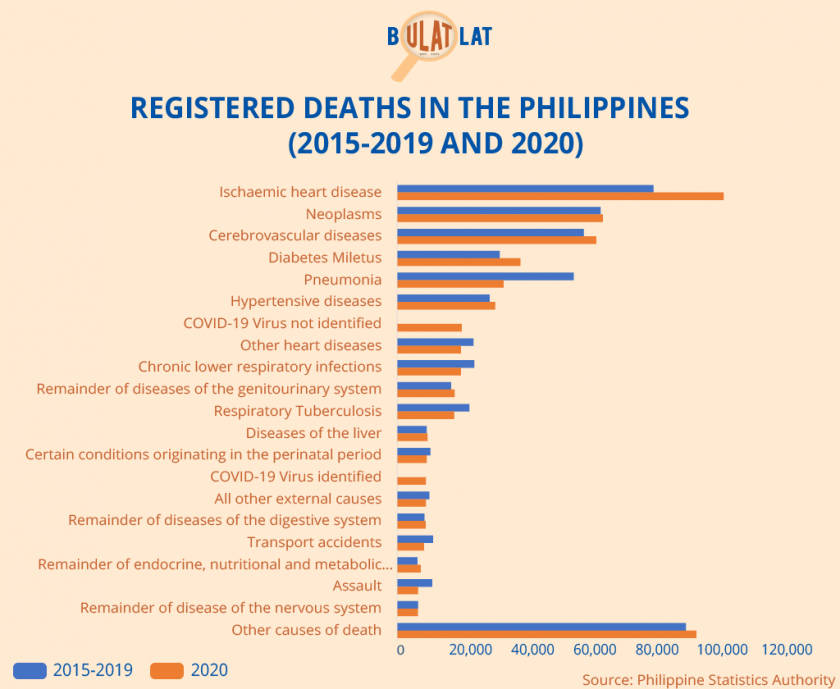 In a text message, urban poor group Kadamay Secretary-General Mimi Doringo said that hospital protocols like negative swab test results for both patient and companion make public health care even more out of reach for poor families. This, she said, is on top of other factors, such as the continuing practices of hospitals of asking for a “cash deposit” before a patient is confined or even attended to.

“It is painful to see loved ones die after going to four to six hospitals but were rejected because we do not have the money, the swab test or if they are already beyond their capacity or when they are prioritizing more serious cases,” Doringo said.

“Where will the poor go?” she asked, adding that they are now being treated along hallways and empty parking lots because they cannot afford private health care.

San Pedro, for his part, said that it is “disappointing that under the so-called ‘Universal Health Care,’ we still see Filipinos lining up before offices of public officials and charitable institutions to secure funds for their medical expenses.”

With Duterte’s presidency ending, San Pedro said that health spending is an important election issue that must be addressed. This includes the strengthening of primary health care, as poor communities need to adapt to the new normal and ensure that they are not left behind.

Public health care, said San Pedro, should not be fragmented. He called for a recentralization under a structure that will dictate the same standards and ensure the delivery of this very basic right to health of the people.

Such recentralization, however, should prioritize the provision of affordable, if not free, health services for Filipinos, especially the poor. (DAA, RVO)