Kerima Lorena Tariman: Hero of the landless and rural poor

MANILA – Much has been said about Kerima Lorena Tariman’s poetry. The primary muse of her verses, the farmers and agricultural workers, honored her as much as her colleagues and friends in the cultural field.

In 2000, she left the University of the Philippines to immerse in peasant communities in Isabela. She was arrested on May 25 of the same year, the military claiming she was a New People’s Army (NPA) guerrilla. After her release from detention, she helped establish the national youth cultural group Kabataan para sa Tunay na Kalayaan (Karatula) where she also served as its first chairperson.

She left the comforts of the city again after the ouster of President Joseph Estrada. She would only resurface and reconnect with her city-based colleagues when her husband Ericson Acosta was arrested in Samar. She led the campaign for Acosta’s release, mobilizing artist-friends from UP, Philippine High School for the Arts and other groups.

Kerima and Ericson joined the Unyon ng Manggagawa sa Agrikultura (UMA) after the latter’s release from prison in 2013. She used her skills as a journalist (she was managing editor of UP Diliman’s official student publication Philippine Collegian) and as a cultural worker to bring to the fore the plight of Hacienda Luisita and Negros agricultural workers.

She was part of the “bungkalan” campaign or cultivation of Hacienda Luisita lands for food production. For five decades – before the Supreme Court issued its decision declaring the farm workers as rightful owners of the vast sugarcane plantation – the Cojuangco-Aquino clan forbid the planting of food crops.

She was part of the team who put into writing the history of decades-long struggle of Hacienda Luisita farm workers for land. In September 2013, she and ten farmers and supporters were detained temporarily while conducting a fact-finding mission on the anomalous distribution of land to the agrarian reform beneficiaries.

Kerima also supported and promoted agroecology or sustainable agriculture. Together with her colleagues at UMA, they produced a manual highlighting the best practices of Hacienda Luisita and Negros farmers on organic farming, and the bungkalan movement as part of grassroots-led land reform.

Kerima was among those who conceptualized the creative activities during the commemoration of the Hacienda Luisita massacre in 2004. She mobilized fellow artists who produced visuals and staged performances, including the reenactment of what happened and music videos honoring the seven martyrs.

She helped establish the Tanghalang Balen ning Luisita (TABLU) in 2016, the cultural group of Hacienda Luisita youth. “Her bold ideas and innate creativity guided the young cultural artists in performing arts for the people,” AMBALA said in Filipino.

UMA said Kerima showed the same passion and commitment in helping the sacadas (seasonal farmworkers) in Negros island. “She investigated the conditions of agricultural workers in the plantations, and memorized the face of exploitation in the sugar industry,” UMA said in Filipino.

Kerima also wrote a primer about the conditions of sugar workers, and led the publication of a special issue of UMA’s newsletter which focused on tiempo muerto (dead season). In a Facebook post, Nadja de Vera, Kerima’s colleague at UMA, showed a photo of the payslip of an agricultural worker in Hacienda Raymunda in Silay, Negros Occidental. The sacada received P500 for one month of backbreaking work.

According to UMA, it was in Negros where Kerima learned fully well the limitations of the legal mass movement. In Hacienda Luisita, she witnessed how farm workers were detained, charged with common crimes, and their crops destroyed. In Negros, farmers who cultivated idle lands were killed or imprisoned for false charges.

UMA said that Kerima, after witnessing so much brutality wielded by the state against the rural poor, decided to take up arms. “She might have chosen a different form of struggle but she had the same revolutionary objective: to break the land monopoly of landlords and big corporations,” UMA said.

As a red fighter 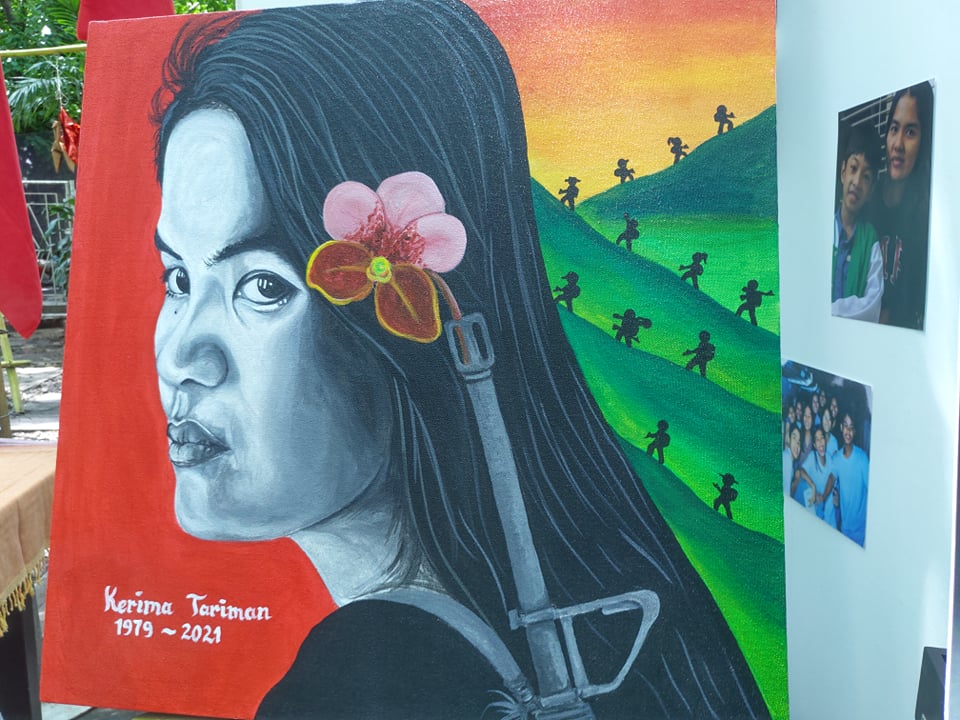 The war being waged by the New People’s Army (NPA) is essentially an agrarian revolution.

In a statement, the Roselyn Jean Pelle Command-NPA Northern Negros said Ka Ella, Kerima’s nom de guerre, played an important role in fighting conservatism among their ranks and in carrying out integral tasks such as agrarian revolution, mass base building and armed struggle.

The NPA command said Ka Ella joined them in the last quarter of 2018, and that she helped systematize the propaganda and education work of NPA units in Northern Negros. She helped publish the NPA front’s publication “Nagabagang Duta,” and taught fellow fighters how to use electronic gadgets for performing their tasks.

“Ka Ella was simple. She was not arrogant despite her achievements. She was a silent and persistent worker. She was warm toward comrades and the masses,” the NPA-Northern Negros said, adding that while the Negrenses mourn the death of Kerima, her memory and sacrifices “inspire them to continue fighting against the feudal and semi-feudal exploitation.” (DAA)