MANILA — Even as he anticipated the difficulties he would face due to distance learning, student leader Marc Rechelle Buntag still took it upon himself to continue working amid the pandemic and support his family in these uncertain times.

“Even before the pandemic, I experienced how hard it is to work while studying. Forced to distance learning, I initially chose online learning which made no difference to modular learning because of the demanding workloads and anomalies,” Buntag, a 20-year-old broadcasting student at the Polytechnic University of the Philippines (PUP), told Bulatlat.

For almost two years now, Buntag has been juggling his studies and work as a call center agent. When the pandemic hit, he said he continued working because his family is relying on his salary to cover their expenses.

“I am so sleepy during my work shift that I feel like I am shutting down whenever I am receiving calls. There were also times when I overslept during my lunch break,” Buntag added.

Often, he said their stories are romanticized for being able to rise above the difficulties of not having functional gadgets, a stable internet connection, and a conducive environment, to name a few. But for Buntag, these are everyday realities that he needs to face.

Buntag is among the Filipino students who have been calling for compassion and better access to education more than a year into the pandemic. These calls have ranged from mass promotion to academic ease and academic break, and the provision of aid and other services the youth needs.

Their persistent calls were met last May 2021 when his university released Memorandum Order No. 6, following a series of protests by students. The memorandum instructed faculty members to provide a reasonable number of activities, including unannounced quizzes and require only a final examination or project as a major assessment, where they will only be given an incomplete grade (not dropped or withdrawn) if they failed to submit it.

But for Buntag, this is just the beginning.

“The academic ease memo should lead the way for a safe return of face-to-face classes through financial aid and support from the government. It is just to assert the reopening of schools,” he added. 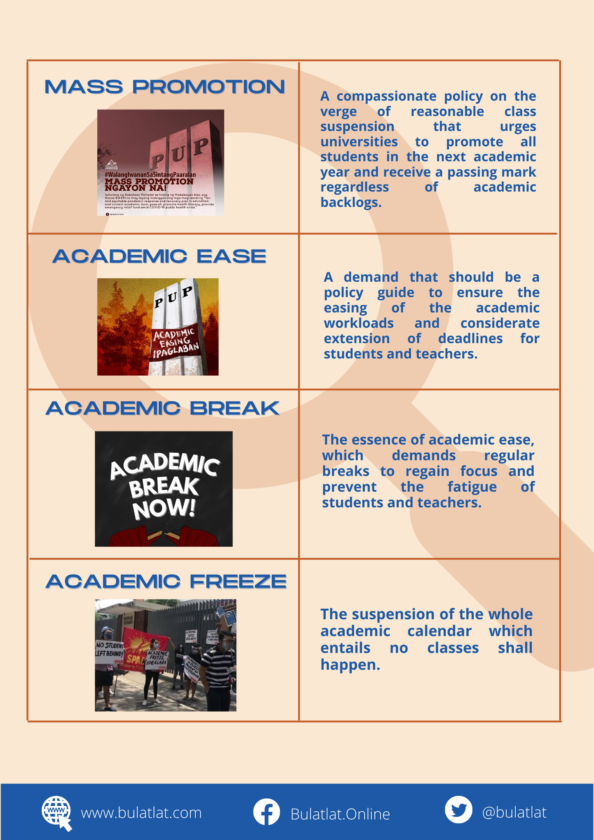 As early as April 2020, students in the Cordillera region are also calling for more compassion as they deal with heavier workloads, higher school fees, and an environment that is not conducive for learning.

Kabataan Partylist-Cordillera spokesperson Louise Montenegro said they first called for an #AcademicBreak after Typhoon Maring hit many communities in Northern Luzon, including Baguio City. Montenegro said this call was aimed at helping students who experience “burnout and exhaustion that gravely affect their mental health.” This experience, she added, keeps students from truly learning their lessons.

The youth group has documented suicides among students, reportedly due to academic pressure.

“The academic break has been a long-lobbied project of the KASAMA SSC even as early as May, or even April to June 2020. We have been asking for academic ease from SLU, but they haven’t really given us any concrete solutions towards it,” Yanni Alla, a third-year student from Saint Louis University and convenor of Walang Iwanan Louisian Network, said.

She added that there have been no concrete solutions to their calls. She said that since they started the school year in August, the only break that they had was about three to four days due to technical problems caused by the internet server.

Alla said that they have to accomplish 20 to 30 assignments per week, where they attend five to six days of synchronous and asynchronous classes. In response to their calls for compassion, she said that only their deadlines were extended. There is also no mechanism in place to ensure that it is being implemented.

Meanwhile, Alla added that instead of promissory notes, families who cannot afford to pay their tuition fees are being referred to a private loans company, which further buries them in debt as the loan comes with an interest rate ranging from $100 to $120 per loan.

Last Nov. 2, student leaders held a dialogue with school administrators of universities in Baguio. This resulted in city officials approving the calls for an academic break.

“This effort will not be possible without the collective action of the entire SLU studentry. Let us take this as a testament of our strength and rightful assertion of our democratic rights. We must exercise vigilance to safeguard our initial success,” said Walang Iwanan Louisian Network in a Facebook post.

Meanwhile, PUP students and organizations pushed for academic ease through the #PUPIkalmaMo: 5 PUP Demands, which includes the extension of semestral break, extension, consideration, and reduction of the academic requirements, 100-percent module distribution, and the implementation of the No-Fail Policy.

The PUP community conducted online consultations, circulated the #PUPIkalmaMo manifesto (which eventually garnered more than 3,000 signatories), lobbied, and held protest actions as they asked the university to address the issues they face under the Flexible Technology Enhanced Learning (FlexTEL).

These eventually led to the release of Memorandum Order No. 6, Series of 2021, instructing the PUP faculty members to ease the academic workload for the second semester of School Year 2020-2021.

How has the government responded to calls

Instead of recognizing the campaigns being held by students and teachers, there have been attempts to discredit calls for the safe resumption of classes as just merely wanting to criticize the government.

These student leaders begged to disagree as access to education has always been an issue in the country, with government data showing that over 3.53 million Filipinos aged six to 24 years old were considered Out-Of-School-Youth as of 2017. As such, the Philippines has the highest out-of-school youth in the ASEAN region.

Remote learning during the pandemic exacerbated this, with more than four million children who opted not to attend school in 2020. This is a nine-percent drop in enrollment rates compared to the 2019-2020 school year, per the Department of Education.

With the pilot face-to-face classes now ongoing, the Senate Finance Committee added a P1-billion ($19.87 million) to the education budget to fund classroom renovations that are appropriate to the new normal, such as layout and ventilation. For state universities, however, the budget is slated to be slashed by P14.7 billion (292.1 million).

Kabataan Partylist said the operating budget of 104 of the 130 state universities will also be reduced. This will include the University of the Philippines and the PUP. This has pushed them to file House Resolution No. 2255, which seeks more budget for the Maintenance and Other Operating Expenses.

“While we understand that academic ease is more of a short-term solution to the poor quality of education we have now, we still continue to lobby the Ligtas na Balik-Eskwela to our LGUs and other concerned individuals,” Alla stated.

What are the solutions being pushed

Amid calls for academic ease and breaks, youth groups are also pushing for the safe resumption of face-to-face classes.

Last month, Kabataan Partylist filed House Bill 10398 or the Safe School Reopening Bill. This provides framework and funding proposals for the safe and phased reopening of schools, especially in those considered as low-risk areas. According to the youth party list, the necessary requisites in returning safely to schools can only be achieved through the proper allocation of confidential and intelligence funds to the health and education sectors.

“We are currently campaigning for the overarching call for Ligtas na Balik-Eskwela, or the gradual and safe resumption of face-to-face classes. It is alarming that the Philippines remains the only country without face-to-face classes and shows how apparently ill-prepared the country mishandled the pandemic in general. While academic ease and breaks are immediately needed in this pandemic, safe school resumption answers the problems we have and that face-to-face classes are the only way we can continue with nobody left behind.” Montenegro said. (JJE, RTS)